Upbeat Macron vows to do better amid ‘yellow vest’ protests 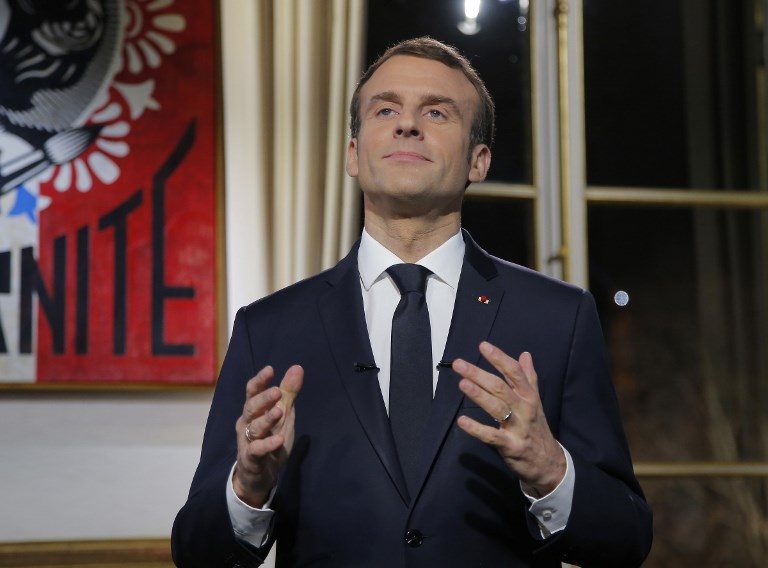 Facebook Twitter Copy URL
Copied
As French president Emmanuel Macron speaks, demonstrators clad in high-visibility yellow vests again gather in Paris and other big cities to demand more measures in favor of the working poor and a greater say for ordinary people in the running of the country

PARIS, France – The French government “can do better” at improving citizens’ lives, President Emmanuel Macron said in his New Year’s Eve address as “yellow vest” protesters again took to the streets across the country.

“We can do better and must do better,” Macron said in a 16-minute televised speech from the Elysee palace while urging the French to “accept the reality” that increased public spending was not the answer to their problems.

Macron’s speech had been keenly awaited, coming at the end of a torrid 6 weeks for the centrist, whose leadership has been severely rattled by 6 weeks of demonstrations that have repeatedly turned violent.

On Monday, December 31, he attempted to turn the page on the crisis and start 2019 on an upbeat note.

Citing hopes for more “truth, dignity and hope” in 2019, he urged the French: “Let’s stop running ourselves down and making believe that France is a country where solidarity doesn’t exist.”

“We live in one of the biggest economies in the world, with some of the best infrastructure in the world, we pay little or nothing for our children’s schooling and we are treated by excellent doctors at some of the lowest costs in the developed world,” he said.

While acknowledging the need for improved public services, particularly in rural areas where the yellow vest movement sprang up over anger at fuel taxes, he noted that public spending already amounted to over half of the country’s output.

As he spoke, demonstrators clad in high-visibility yellow vests again gathered in Paris and other big cities to demand more measures in favor of the working poor and a greater say for ordinary people in the running of the country, in the form of citizen-sponsored referendums.

Several dozen protesters joined tens of thousands of tourists gathered on the famous Champs-Elysees avenue in Paris – the scene of pitched battles between protesters and police on several consecutive weekends before Christmas – for a New Year’s fireworks display.

In the southwestern city of Bordeaux, dozens of “yellow vests” occupied a major bridge.

As in Paris, the protesters said they intended the evening to be one of celebration, not of unrest. The protests look set to continue into 2019.

Nearly 150,000 security force members were deployed around the country to keep the peace.

Macron took aim at the radical fringe of the yellow vests and their supporters on the far right and hard left, saying “some who claim to speak in the name of the people” merely acted as the “megaphones of a hate-filled crowd”.

“Republican order will be ensured with no leniency,” he vowed, listing “lawmakers, the security forces, journalists, Jews, foreigners, homosexuals” as being the objects of physical and verbal attacks.

He also vowed not to be swayed from his reform agenda, which was thrown into question after he jettisoned his controversial fuel tax hike and announced 10 billion euros in aid for the low-paid to try to tame the revolt.

Among the priorities he listed for 2019 were trimming the bloated public sector, as well as the unemployment and pension systems.

With an eye on European Parliament elections in May, he also announced plans to put forward a “renewed European project” based on “regaining control of our lives”, citing fiscal justice, agriculture, migration and security as areas where joint EU action was needed.

The “yellow vest” movement has waned dramatically in the last fortnight but the prospect of protesters mixing in with revelers poses a challenge for the police.

France remains on high alert due to the threat of terrorism, with the latest attack dating to December 11 when 5 people were killed by a gunman at a Christmas market in Strasbourg.

New Year’s Eve also sees many French youths from poverty-wracked areas of the country set fire to hundreds of cars in what has become a grim annual tradition that ties up police officers.

A new poll out on Monday showed that 31 percent of respondents had a positive opinion of Macron, down one point in a month.

The figure was sharply higher than other polls, however, some of which show him with an approval rating in the low 20s.

The president faced fresh embarrassment on Monday from his disgraced ex-bodyguard who revealed that he continued to exchange messages regularly with the president even after he was forced out of his job in July over a scandal.

Alexandre Benalla caused severe embarrassment for Macron after he was caught on video roughing up protesters at a demonstration in May while wearing a police helmet.

Last week it was revealed that, despite being sacked from his job, he has continued to travel widely on a diplomatic passport. – Rappler.com