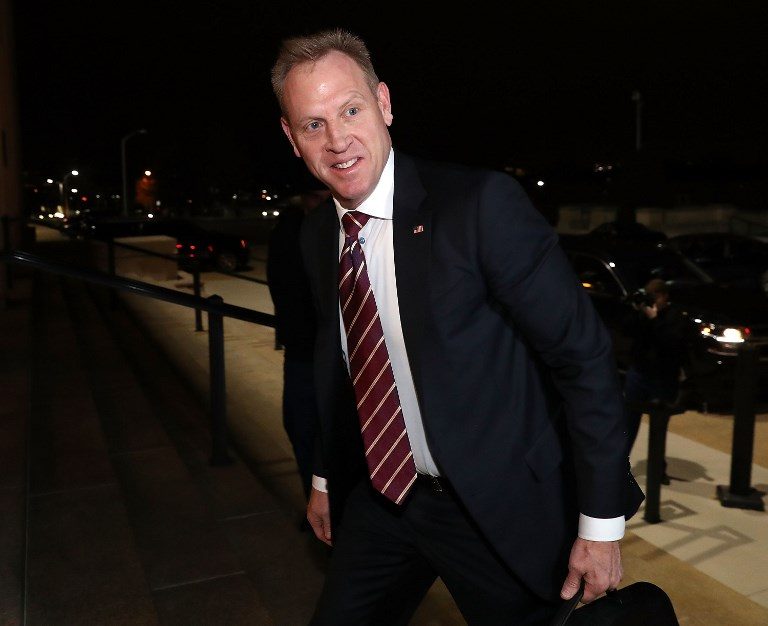 Facebook Twitter Copy URL
Copied
'I'm not happy with what [Mattis has] done in Afghanistan and I shouldn't be happy,' says US President Donald Trump

Shanahan, who took the Pentagon’s top spot January 1 after serving as deputy defense secretary, was thrust onto the world stage when Mattis quit last month amid long-running disagreements with President Donald Trump.

During televised remarks ahead of his first cabinet meeting of 2019, Trump claimed he had “essentially fired” Mattis, even though the former Pentagon chief had pointedly quit his post over multiple disagreements.

“I’m not happy with what [Mattis has] done in Afghanistan and I shouldn’t be happy,” Trump said, as Shanahan sat by his side.

“I wish him well. I hope he does well. But as you know, President Obama fired him and essentially so did I. I want results.”

Mattis, a former Marine general, was head of US Central Command when Obama fired him in 2013 over his hawkish views on Iran.

While it is common for Trump to turn on former staffers and make demeaning remarks after they’ve left their post, the Mattis criticism is notable as Trump had often touted his admiration for the man he called “Mad Dog Mattis.”

The drama came after Shanahan sought to lay out his priorities for America’s massive defense department and how he intends to deal with an urgent list of geopolitical to-dos, including the US withdrawal from Syria.

Soon after arriving at the Pentagon, Shanahan told colleagues to focus on the National Defense Strategy, a Mattis-era review that highlights “Great Power competition” with Russia and China.

“In 2019, the National Defense Strategy remains our guide. America’s military strength remains our focus,” Shanahan said in a New Year’s message on Twitter.

A defense official added that Shanahan had told colleagues a major concern would be China.

“While we are focused on ongoing operations, Acting Secretary Shanahan told the team to remember: China, China, China,” the official said.

The US accuses Beijing of an ongoing pattern of military and economic espionage, and has criticized China’s ambitious “Belt and Road” trade and infrastructure initiative as being a form of economic coercion.

Shanahan must oversee the pace at which the US pulls some 2,200 troops out of Syria, following the president’s decision to exit the war-torn country.

Last month, Trump declared victory over the Islamic State group in Syria and claimed the jihadists had been beaten “badly,” even though they still number in the thousands.

He has since backpedaled and suggested more of a phased timeline for the withdrawal.

“We’re withdrawing,” Trump said, adding it would happen “over a period of time.”

At another point, Trump told Shanahan he wanted him to classify various reports, presumably including those detailing the security crisis in Afghanistan.

“For these reports to be given out and essentially given out to the enemy, that’s insane,” Trump told Shanahan.

“I don’t want it to happen anymore Mr Secretary, you understand that.”

According to US officials, Trump is also mulling a 50% drawdown in Afghanistan – another momentous move that has left lawmakers and international allies fearing for what comes next.

Little known outside business and Washington circles, Shanahan takes the world stage at a time of tumultuous changes and unpredictable foreign policy moves under Trump.

Shanahan, 56, did not serve in the military and before but serving as deputy defense secretary he spent more than 30 years at Boeing.

While Shanahan has not always had day-to-day involvement in thorny geopolitical issues like Syria, officials say he is ready to tackle them and previously filled in for Mattis when he was traveling.

Despite a lack of foreign policy or military experience, Shanahan’s executive and technical knowledge made him well suited for the Pentagon’s number two position, which focuses more on the Defense Department’s business side.

But some critics have questioned whether a man with deep industry ties should be running the Pentagon.

At his confirmation hearing to be deputy, the late senator John McCain said a lack of detail in some of Shanahan’s foreign policy answers was “almost insulting,” and he expressed concerns that putting a former defense executive in the Pentagon could be akin to putting a fox “back in to the henhouse.”

Lieutenant Colonel Joe Buccino, Shanahan’s spokesman, said he had recused himself from any matters involving Boeing.

Also Wednesday, Shanahan announced that the Pentagon’s comptroller, David Norquist, will perform the duties of deputy secretary of defense. – Rappler.com