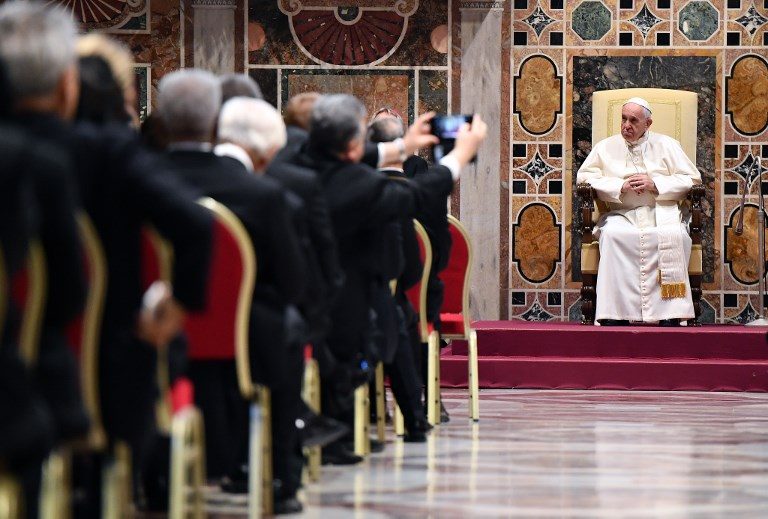 Facebook Twitter Copy URL
Copied
'I cannot refrain from speaking of one of the plagues of our time, which sadly has also involved some members of the clergy,' says Pope Francis

VATICAN CITY, Holy See – Pope Francis vowed justice for victims of clerical sex abuse Monday, January 7, describing pedophilia as one of the “vilest” crimes ahead of a historic global meet on the crisis roiling the church.

“I cannot refrain from speaking of one of the plagues of our time, which sadly has also involved some members of the clergy,” he said in his annual address to ambassadors to the Holy See.

“The abuse of minors is one of the vilest and most heinous crimes conceivable. Such abuse inexorably sweeps away the best of what human life holds out for innocent children, and causes irreparable and lifelong damage,” he said.

Francis swore to “render justice to minors,” and said a meeting of the world’s bishops in February was “meant to be a further step in the church’s efforts to shed full light on the facts and to alleviate the wounds caused by such crimes.”

A litany of child sexual abuse scandals has rocked the Catholic church, which has 1.3 billion followers around the world.

In December the Pontiff had vowed the church would never again treat abuse allegations without “seriousness and promptness,” calling on abusers to hand themselves in to police.

The Argentine has struggled to resolve the problem as the steady drip of scandal corrodes the church’s authority amid sharp divisions in Rome over how to handle the fallout, and an apparently endless stream of bad news.

In the latest case to shake the Catholic church, the highest-profile Catholic cleric to be caught up in a pedophile scandal in France went on trial on Monday charged with failing to report a priest who abused boy scouts in the 1980s and 90s.

Cardinal Philippe Barbarin, the archbishop of Lyon, in central eastern France, is accused along with 5 others from his diocese of helping cover up abuse in one of the parishes in the area.

On Friday, the Vatican confirmed that an Argentinian bishop who has held a senior position at the Holy See since 2017, is under preliminary investigation over sex abuse claims. – Rappler.com