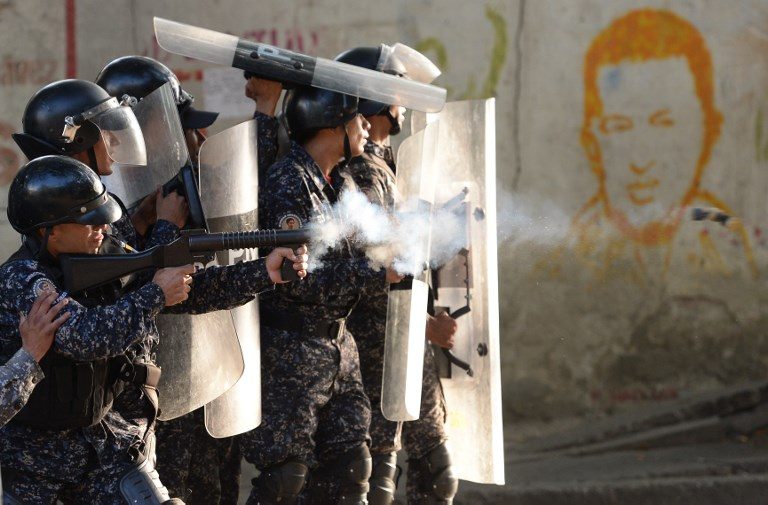 CARACAS, Venezuela – A group of 27 soldiers rose up against Venezuela’s President Nicolas Maduro at a command post in Caracas on Monday, January 21, but they were quickly arrested after posting an appeal for public support in a video.

“We are the professional troop of the National Guard against the regime, which we completely repudiate. I need your help, take to the streets,” a man who identified himself as the group’s leader said in a video circulated on social media.

Before the attack on a National Guard command center in northern Caracas where they were captured, the men had assaulted another security post, taking 4 prisoners and making off with “weapons of war,” the statement said.

“During the arrest, stolen weapons were recovered and (the mutineers) are providing useful information to intelligence services and the military justice system,” added Padrino, who said the rebels would “face the full force of the law.”

Maduro’s right-hand man and head of the Constituent Assembly, Diosdado Cabello, said 25 soldiers were arrested at the site, and two more were detained elsewhere.

The Supreme Court, which is dominated by regime loyalists, later took aim at the opposition-controlled National Assembly, declaring its leadership illegitimate and its decisions invalid.

Last week, the assembly had declared Maduro an “usurper,” and offered members of the military and the government amnesty if they broke with Maduro.

It also called for a day of protests against the president on Wednesday.

The mutiny unfolded in the early hours of the day and culminated at the National Guard’s Cotiza command, which was later surrounded by police and troops.

“They were neutralized, surrendered and captured in record time,” Cabello tweeted.

“They are already confessing details and the first thing they said is that they were offered villas and castles but were left alone, they were tricked. We will win,” he added, without specifying who allegedly made the offer.

The armed forces fired tear gas to disperse protesters who gathered outside the command post, banging pots and blocking roads with burning garbage in support of the uprising.

“If they unite with our country, we’re with them, we’re going to stay in the streets. Freedom!” shouted one woman, who declined to be identified.

National Assembly president Juan Guaido, who has engaged Maduro in a power struggle since being elected to lead the legislature earlier this month, spoke out in support of the mutinous soldiers.

“What is happening in the National Guard in Cotiza is a demonstration of the general feeling that reigns within” the armed forces, Guaido said on Twitter.

“Our military knows that the chain of command has been broken by the usurpation of the presidential office.

“The National Assembly is committed to offering all the necessary guarantees to members of the armed forces that actively contribute to the restoration of the constitution.”

But the Supreme Court responded by declaring Guaido, who has quickly become the central figure in the Maduro opposition, a usurper himself.

Parliament “does not have a legitimate board of directors” the court’s president Juan Jose Mendoza said in a statement he read to the press, adding that the National Assembly was “usurping its authority, and therefore all its decisions are void.”

The top court also said it was annulling the legislature’s decision to officially declare Maduro a usurper and promising an amnesty law to protect military personnel that turn against the president.

Maduro, who has presided over the virtual collapse of the economy and a mass exodus of Venezuelans fleeing unemployment and shortages of food and medicine, has so far retained the support of the military high command despite growing domestic discontent.

He won controversial snap elections in May that were boycotted by the opposition and branded fraudulent by the United States, the European Union and a dozen Latin American countries.

The National Assembly has long been held in check by the Supreme Court, which stripped it of its powers after the opposition gained control of the legislature in 2016 elections.

Guaido, though, has shown a determination to challenge Maduro’s authority.

He previously urged the general population and armed forces to support a transitional government that would oust Maduro and organize elections.

He has also called for a mass protest on Wednesday to support his demands, while the regime has announced its own counter-demonstration in support of Maduro.

It will be the first such mass street action since 2017 when more than 4 months of street protests claimed the lives of 125 people. – Rappler.com