Russia wheels out key missile in bid to save U.S. arms treaty 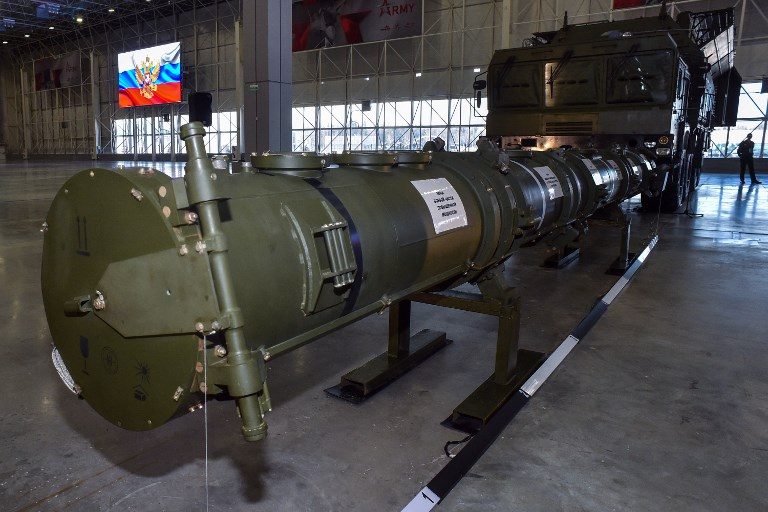 KUBINKA, Russia (UPDATED) – Russia on Wednesday, January 23, unveiled a missile system that Washington claims is in violation of a key arms control treaty, in a last-minute bid to counter US criticism and save the Soviet-era agreement.

Moscow has repeatedly denied the system contravenes the treaty and, to prove its point, on Wednesday showed off the missile at Patriot Park, a sprawling theme park near the town of Kubinka just outside Moscow.

Standing next to the system, a Russian defense ministry official detailed the missile’s features to assembled foreign media and foreign military officials.

Russian defense and foreign ministry officials insisted the range of the missile system was allowed under the agreement.

Mikhail Matveevsky, Russia’s chief of artillery and missile troops, said its maximum range is 480 kilometers (300 miles), while he said the INF treaty only bans missiles with ranges of 500 to 5,500 kilometers (310 to 3,400 miles).

“Russia was in compliance and continues to be in strict compliance with the stipulations of the treaty and does not allow any violations,” he said.

Matveevsky said Moscow was presenting the information in the interests of “voluntary transparency”.

Washington has said it would not be satisfied with Moscow’s offer of a “static display” of the missiles, because they would not show whether they breach the treaty.

The US says the missile system should be destroyed in a verifiable manner if Russia wants to keep the INF alive.

Deputy Foreign Minister Sergei Ryabkov, also in attendance, said Moscow decided to unveil the missile after talks with US officials in Geneva this month resulted in “complete failure”.

Last month Washington gave Russia a 60-day deadline – which ends on February 2 – to dismantle the 9M729 or the US would begin the 6-month process of formally withdrawing from the treaty.

Ryabkov said that because Washington’s claims were unsubstantiated the agreement would remain in force even if the US tries to withdraw.

He said the US continued to work on missiles banned by the treaty and was expanding its production facilities at home.

“The treaty must be preserved,” Ryabkov said. “It is for the American side to make the choice.”

Russia said 21 foreign military officials were in attendance at the briefing, though none from any NATO country.

Most foreign diplomats at the briefing refused to say whether Moscow managed to convince them it was in compliance.

But Li Xiaofeng, an aide to a Chinese military attache, said it was important that Russia had presented both the 9M728 and 9M729 missiles.

Li said there was “no evidence” Russia violated the agreement.

The INF treaty puts no restrictions on major military actors like China, a huge concern for the United States.

Washington has said Russia’s offers of inspection of the 9M729 merely “paid lip service” to transparency.

Russian President Vladimir Putin has threatened to develop nuclear missiles banned under the INF treaty if it is scrapped.

He said in December he was open to the idea of other countries joining the deal or to starting talks on a new agreement.

Putin has also said if Washington moves to place more missiles in Europe after ditching the deal, Russia would respond “in kind” and that any European countries agreeing to host US missiles would be at risk of a Russian attack.

The European Union has urged Russia and the US to save the deal.

The agreement was signed towards the end of the Cold War by then US president Ronald Reagan and Soviet leader Mikhail Gorbachev, resolving a crisis over Soviet nuclear-tipped ballistic missiles targeting Western capitals. – Rappler.com