Jan 24, 2019 8:04 AM PHT
Agence France-Presse
Facebook Twitter Copy URL
Copied
A top US administration official says, if 'Maduro and his cronies choose to respond with violence, if they choose to harm any of the National Assembly members... all options are on the table for the United States in regards to action to be taken' 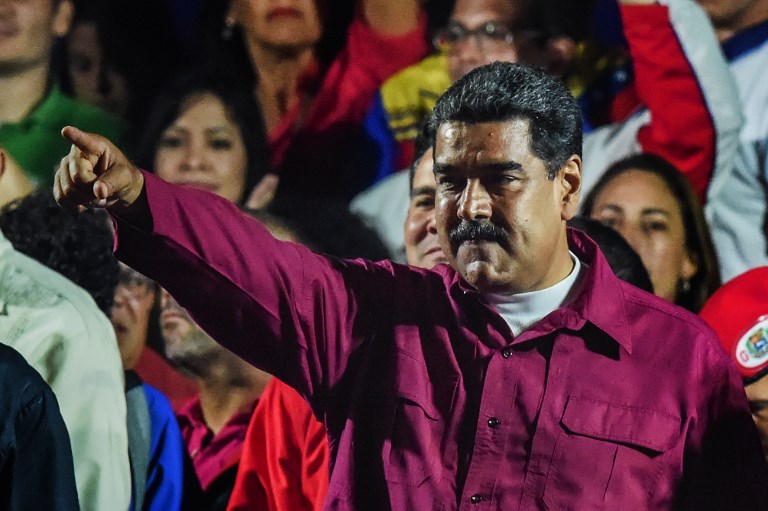 The move by Juan Guaido – which came as thousands of rival protesters jammed the streets of Caracas, at times clashing with riot police – sharply raised the stakes in the oil-rich nation which became impoverished under Maduro.

It also capped days of political drama that has seen 7 protesters killed since Tuesday night, January 22.

“I swear to formally assume the national executive powers as acting president of Venezuela to end the usurpation, (install) a transitional government and hold free elections,” the 35-year-old Guaido told a throng of cheering supporters.

Within minutes, President Donald Trump issued a statement declaring Maduro “illegitimate” and calling the National Assembly “the only legitimate branch of government duly elected by the Venezuelan people.”

A dozen regional players soon followed suit, with Brazil, Argentina, Colombia and Canada among those backing Guaido, although Mexico and Cuba stood firm in support of Maduro – as did the country’s powerful military.

A furious Maduro responded by breaking off diplomatic ties with the “imperialist” US government, giving its diplomats 72 hours to leave.

“Get out! Leave Venezuela, here there’s dignity, damn it,” shouted Maduro to the cheers of thousands supporters outside the presidential palace in Caracas.

Guaido retorted with an open letter urging foreign powers to maintain their diplomatic presence in the country.

Maduro’s isolation was starkly apparent as the international community closed ranks around Guaido – and against the leftist leader, reelected in May in snap elections  boycotted by the opposition and denounced around the world.

In Washington, a top administration official issued a stern warning to Maduro’s regime not to use force against the opposition.

“If Maduro and his cronies choose to respond with violence, if they choose to harm any of the National Assembly members… all options are on the table for the United States in regards to action to be taken,” said the official.

And the head of the Organization of American States (OAS), Luis Almagro, told Guaido: “You have all our recognition to launch the return of democracy to the country.”

Guiado’s declaration coincided with the first mass street protests in Venezuela since 125 died in clashes between April and July, 2017.

It also came shortly after Venezuela’s Supreme Court – dominated by Maduro loyalists – ordered a criminal investigation of the National Assembly for trying to depose the president.

Thousands of Maduro supporters, many wearing red, converged outside the presidential palace, Miraflores, to oppose what they see as a US-backed opposition coup attempt.

But elsewhere in Caracas, tens of thousands of opposition supporters, many dressed in white, chanted, “Guaido, friend, the people are with you” as they waved Venezuelan flags.

“Brothers and sisters, today I step forward with you in the knowledge that we are in a dictatorship,” said Guaido.

“I have faith and hope in Guaido, a young lad who can help us to go forward,” 49-year-old Florangel Rodriguez told AFP.

Tensions were running high, with riot police firing tear gas and rubber bullets at opposition protesters in one Caracas suburb, while television pictures also showed armoured vehicles in the capital.

Speaking from a balcony at the presidential palace, Maduro lashed out at Trump, denouncing his “extremist policy” as “a very serious folly.”

“Trying to impose a government by extra-constitutional means, we cannot accept that.”

Maduro appealed for the support of the armed forces – which pledged its continuing loyalty to him.

“The nation’s soldiers don’t accept a president imposed by obscure interests, nor one self-proclaimed outside of the law,” Defense Minister Vladimir Padrino tweeted.

The armed forces “will defend our constitution and is the guarantor of national sovereignty,” he said.

‘The people are suffering’

Since being elected president of the National Assembly in December, Guaido has managed to rally a divided opposition.

He dismissed fears he could be arrested, saying: “No, I’m afraid for our people who are suffering.”

Maduro has presided over a deepening economic crisis that has left millions in poverty as the country faces shortages of basic necessities such as food and medicine.

Some 2.3 million people have fled the country since 2015, according to the United Nations, while the International Monetary Fund says inflation will hit a staggering 10M% this year.

Shops, schools and businesses remained closed on Wednesday and there was little traffic on the roads.

Guaido called the protests two weeks ago in a bid to rally support behind his aim to remove Maduro, set up a transitional government and hold elections.

He accuses Maduro of being a usurper following his disputed re-election in a poll dismissed as a fraud by the European Union, the US and OAS. – Rappler.com