‘We are losing the race’ on climate change – U.N. chief 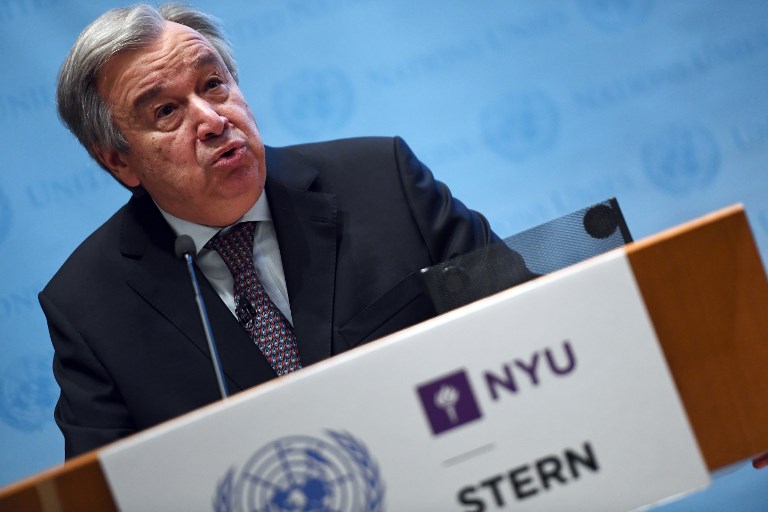 Guterres delivered a no-holds-barred appraisal to business and political leaders gathered at the World Economic Forum in Davos, which has featured much hand-wringing on the planetary crisis this week.

“In my opinion it is the most important global systemic threat in relation to the global economy,” the UN secretary-general told his high-caliber audience.

“Climate change is running faster than what we are,” he said. “I believe we are losing the race.”

The business community and civil society are increasingly engaged, “but the political will is still very slow”, he said, lamenting the position of climate doubters.

“We are moving dramatically into a runaway climate change if we are not able to stop it.”

A UN summit last month in Poland, which was designed to advance the Paris climate accord, laid bare continuing fissures over the share of responsibility among countries to cap temperature rises.

The Paris accord has been shaken by the withdrawal of the United States under President Donald Trump, and by threats to do the same by Brazil’s new hard-right leader, Jair Bolsonaro.

Guterres, on an earlier Facebook Live broadcast, said the commitments made in Paris were already “not enough” but was “not hopeful” that nations would find the necessary resolve.

“If what we agreed in Paris would be materialized, the temperature would rise more than 3.0 degrees (Celsius),” he said.

“We need countries to make stronger commitments,” Guterres said, calling for more measures to mitigate climate change and adapt to it, along with financial aid for poorer countries.

A WEF survey ahead of the Davos meeting found climate change was the leading concern of forum participants around the world, noting in particular the growing frequency of extreme weather events.

Corporate executives in Davos such as Patrick Pouyanne, CEO of French energy giant Total, have been touting their own measures to transition to a greener economy.

“We don’t look to renewables to be green,” he told the CNBC channel in Davos on Thursday, noting that electricity is the fastest-growing segment of the energy market.

One vocal voice in Davos this week has been Swedish 16-year-old Greta Thunberg, who has inspired a wave of climate protests by schoolchildren around the world after delivering a fiery speech at the UN climate summit in Katowice, Poland last month.

“They (companies) have known exactly what priceless values they have been sacrificing to continue making unimaginable amounts of money,” she told Agence France-Presse in an interview.

Former secretary of state John Kerry, who signed the Paris accord for the United States in 2016, said 38 out of the 50 US states were implementing their own climate policies despite Trump’s withdrawal and vocal skepticism on climate change.

The Paris pact was based partly on the expectation that the private sector would step up with new investment in areas such as batteries and solar panels, he noted.

“It’s not happening enough, and even in Katowice recently, you saw the fight that was taking place, just to be able to try to be reasonable here,” Kerry said in Davos Tuesday, January 22, also on CNBC.

“We’re heading towards 4.0 degrees Centigrade increase in this century, and the passive indifference that most countries are accepting is basically a mutual suicide pact.”

Another idea long in the mix of the climate debate is a carbon tax, which would factor in the polluting price of fossil fuels so as to discourage their use over time.

That has been anathema for many governments, including the United States well before Trump.

But it is gaining ground anew under an initiative by the Climate Leadership Council that is backed by 27 Nobel economics laureates and 4 former chairs of the Federal Reserve.

Ted Halstead, president of the US organization, has been in Davos this week selling the idea of US households getting back the revenue raised, in the form of lump-sum rebates. – Rappler.com