U.S. calls to ‘stand with freedom’ in Venezuela as EU gives ultimatum 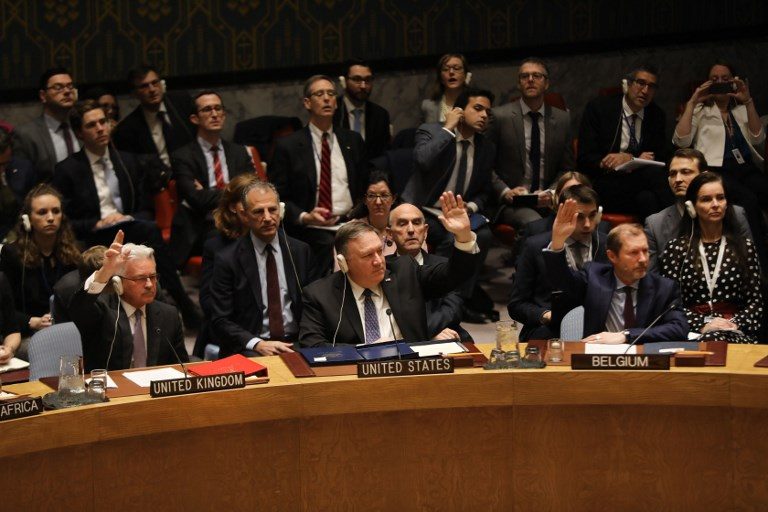 UNITED NATIONS – The United States pressed all nations on Saturday, January 26, to “stand with the forces of freedom” in Venezuela, encouraged by a tougher European line as Russia stood in the minority in backing embattled leader Nicolas Maduro.

US Secretary of State Mike Pompeo made a forceful case at a special session of the United Nations Security Council, where he described Maduro as part of an “illegitimate mafia state” responsible for Venezuela’s economic collapse.

With mounting protests over Venezuela’s crisis in which more than two million have fled shortages of basic food and medicine, Pompeo asked all nations to follow the US in recognizing opposition leader Juan Guaido as the interim president.

“Now it is time for every other nation to pick a side. No more delays, no more games. Either you stand with the forces of freedom, or you’re in league with Maduro and his mayhem,” Pompeo said.

Pompeo denounced Russia and China, which have stood by Maduro, saying that they were motivated not by principle but raw financial interest.

“China and Russia are propping up a failed regime in the hopes of recovering billions of dollars in ill-considered investments and assistance made over the years,” Pompeo said.

Russia has denounced the United States for interference and attempted to block the Security Council meeting, but it was voted down with 9 of the 15 members agreeing to go forward.

“Venezuela does not pose any threat to peace and security. The intention of the United States is to orchestrate a coup d’etat,” said the Russian ambassador, Vassily Nebenzia.

He accused the United States of renewing a long history of imperialism in Latin America, saying that Washington treated it as a “backyard where you can do anything you want.”

But Russia managed to block a Security Council statement seen by Agence France-Presse that would have offered “full support to Guaido and called the National Assembly that he heads “Venezuela’s only democratically elected institution.”

President Donald Trump’s recognition of Guaido has enjoyed the support of many, but not all, Latin American powers including Brazil, Colombia and Argentina.

European powers, after cautious initial statements, on Saturday warned that they will recognize Guaido unless Maduro calls elections within 8 days.

“If within 8 days there are no fair, free and transparent elections called in Venezuela, Spain will recognize Juan Guaido as Venezuelan president” so that he himself can call the vote, Spanish Prime Minister Pedro Sanchez said in a televised announcement.

French President Emmanuel Macron followed suit in a tweet, saying “the Venezuelan people must be able to freely decide on their future.” Germany and Britain also joined in the ultimatum.

Guaido quickly welcomed the support from the European powerhouses.

“There continues to be progress in the European Union for the recognition and full support of our legitimate and constitutional struggle,” he tweeted. (READ: Venezuela opposition leader cranks up pressure on Maduro)

But other members of the 28-nation bloc such as Austria, Greece and Portugal are more reluctant.

Sanchez insisted that Spain, which has some 200,000 of its nationals living in Venezuela, is “not looking to impose or remove governments in Venezuela, we want democracy and free elections in Venezuela.”

Maduro’s re-election last year was contested by the opposition and rejected by the US, EU and UN as a sham – but he has until now retained the loyalty of the powerful military.

Guaido, who has managed to galvanize a previously divided opposition, this week attempted to attract military support by offering an amnesty to anyone who disavows Maduro, with no luck so far.

In a Skype interview with Univision late Thursday, he went one step further by suggesting Maduro could be offered amnesty if he agrees to step down.

He has, however, rejected an offer of talks with Maduro, saying he won’t attend a “fake dialogue” on a crisis that has left 26 dead in clashes this week between anti-Maduro activists and security forces.

More than 350 people have also been detained this week in the protests, UN High Commissioner for Human Rights Michelle Bachelet said Friday.

Guaido has acalled for another “major demonstration” next week.

Maduro, for his part, called for a “popular rebellion against the coup” on the streets of Venezuela.

The Inter-American Human Rights Commission late Friday issued a statement warning that Guaido’s life and health were in danger given the high political tension in the country.

Maduro has given US diplomats until late Saturday to leave Venezuela.

The United States said it was ignoring the orders as it no longer considers Maduro the president – but withdrew non-essential staff and argued that Maduro, who controls the security forces, still bore responsibility for diplomats’ safety.

“Do not test the United States on our resolve to protect our people,” Pompeo warned. – Rappler.com