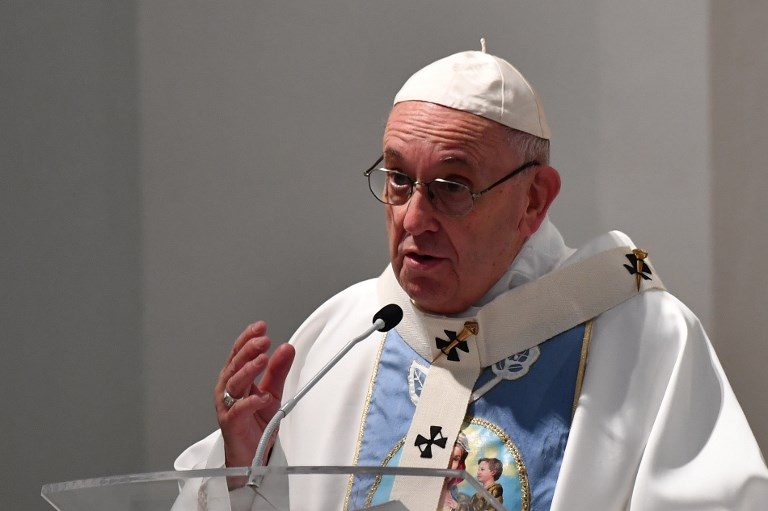 PANAMA CITY, Panama (UPDATED) – Pope Francis acknowledged on Saturday, January 26, that the Catholic Church was “wounded by sin” in a message addressed to priests and seminarians reeling from sexual abuse scandals and coverups.

In a mass that he officiated at the centuries-old Cathedral of Santa Maria La Antigua in Panama City, Francis warned of the “weariness of hope that comes from seeing a Church wounded by sin, which has so often failed to hear all those cries.”

It was the Argentine pontiff’s first reference to the sex abuse scandals rocking the Church since he arrived in Panama on Wednesday, January 23, for a global gathering of young Catholics.

There, sitting over lunch at a white linen covered table, the Pope referred to clerical sex abuse as “a horrible crime.”

He was responding to a question from a young Mexican immigrant to the United States, Brenda Berenice Noriega, about the crisis.

“He called it a horrible crime,” Noriega told a press conference after the lunch, a tradition at the global gatherings.

“The Holy Father reminded us that it is important to accompany the victims,” she said, a youth minister in San Bernadino, California.

“For me as representative of the US and a minister of young people, it means a lot. It’s to keep in mind that all the victims of the sexual crisis are heard, and that the Church is committed to supporting them,” she said.

Francis has called senior bishops from around the world to Rome next month to deal with widespread clergy sex abuse of children and young people. (READ: Pope Francis ‘begs for God’s forgiveness’ for sexual abuse scandal)

The Vatican has billed the February 21 to 24 meeting as a unique chance to provide bishops with “concrete measures” to tackle the “terrible plague” of sex abuse by the clergy.

Addressing white robed young seminarians and priests during the Mass, the Pope said “a subtle weariness” had entered Church communities that “calls into question the energy resources and viability of our mission in this changing and challenging world.”

Those changes, he said, “call into doubt the very viability of religious life in today’s world.”

But the notion that religious communities had nothing to contribute – that the world “has no room for our message” – would be “one of the worst heresies possible in our time.”

A vast, festive crowd of young people, many waving the flags of their countries, gathered throughout Saturday afternoon at a park outside Panama to await the pope for a giant prayer vigil at nightfall.

The organizers said they expected around 200,000 people at the event.

Francis, 82, drew the largest crowd of his 5-day visit on Friday evening at a solemn ceremony commemorating Christ’s crucifixion in another Panama park.

In a swipe at US President Donald Trump’s plans to build a border wall against Central American migrants, the Pope told hundreds of thousands of young pilgrims that it was “senseless” to condemn every immigrant “as a threat to society.”

He has used his encounter with young people in Central America this week to speak out strongly in defense of migrants, and address other problems affecting the region such as poverty, drug trafficking, violence and what he said was a regional “plague” of murders of women.

At the mass in the basilica – home of the first diocese on the American mainland – the Pope’s homily to seminarians about the challenges of the priesthood raised the problem of dwindling vocations around the world.

Around the globe, there were 414,969 Catholic priests at the end of 2016, more than 800 less than in 2014, according to the Vatican. There were nearly 700 less people joining the priesthood over the same period.

Francis himself acknowledged at a general audience in August that the scandals of abuse and cover-up by Church leaders has caused a decline in vocations to the priesthood in Ireland. – Rappler.com