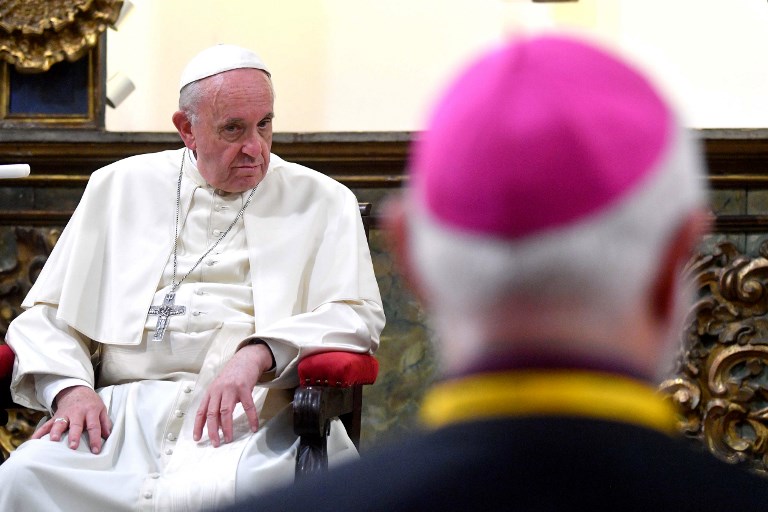 ABOARD PAPAL PLANE – Pope Francis said Monday, January 28, celibacy for priests was a “gift to the Church” and not “optional,” nixing the prospect of married men being ordained.

“Personally I think that celibacy is a gift to the Church,” the pope told journalists aboard his plane returning to the Vatican from Panama.

“Secondly, I don’t think optional celibacy should be allowed. No,” he said.

The pope nevertheless conceded “some possibilities for far flung places,” such as Pacific islands or the Amazon where “there is a pastoral necessity.”

“This is something being discussed by theologians, it’s not my decision,” he said.

The Argentine pontiff has repeatedly said there is no doctrinal prohibition on married men becoming priests, and therefore the discipline could be changed.

Saint Peter, the church’s first pope, had a mother-in-law, according to the bible.

Some within the church believe it is time to join many eastern rite Catholic Churches in permitting married men to take the cloth. Married Anglican priests keen to convert to Catholicism have already been welcomed over.

The Vatican’s number two, Cardinal Pietro Parolin, suggested in an interview last year that the church could “gradually look in depth” at the issue, while ruling out any “drastic change.”

Some 60,000 priests have given up their vocation over the past few decades, often to marry.

Pope Paul VI’s refusal to open the door to the use of the pill in the Swinging Sixties saw many priests abandon their calling.

Pope Francis suggested in 2017 that the church “reflect” on the question of ordaining “viri probati,” married men of proven virtue, particularly in far-flung places where priests are thin on the ground.

The idea is likely to be on the table at a synod this year dedicated to the Amazon, an immense territory where clergy are scarce.

Sensing a possible shift in attitude, some 300 married, former priests in Italy sent a letter to Francis last year offering to take up the cloth once more should he need them. – Rappler.com