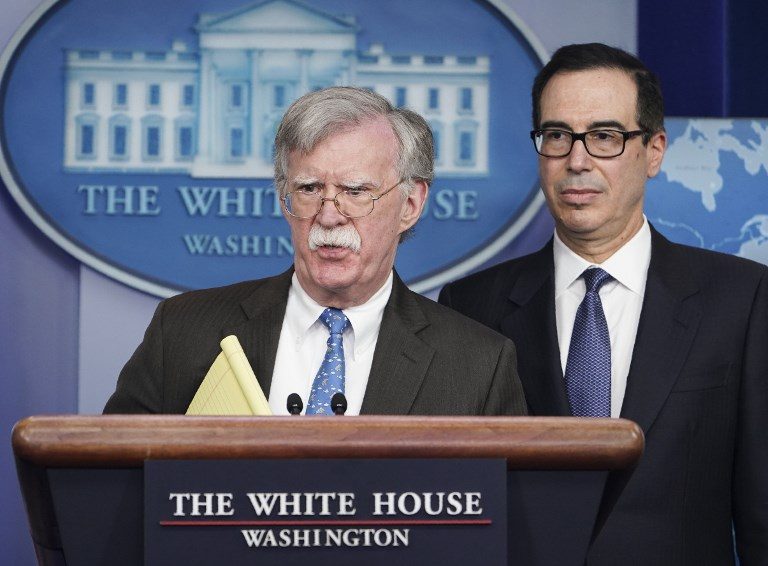 The measures against state-owned PDVSA were presented as a way of preventing the leftist strongman from looting the coffers in his economically ruined country before he is replaced by the man Washington says is the rightful interim president – opposition leader Juan Guaido.

“The purpose of sanctions is to change behavior,” Treasury Secretary Steven Mnuchin told reporters at the White House.

“So when there is a recognition that the company is the property of, the rightful rulers, the rightful leaders, then indeed that money will be available to Guaido.”

Guaido, who heads the National Assembly legislature and has named himself acting president, issued his own statement, saying he was taking “orderly control of our republic’s assets abroad” to prevent a departing Maduro from trying “to empty the coffers.”

Venezuela was once a Latin American success story and has the world’s largest oil reserves, but has been driven into the ground during years of hardline leftist rule.

With millions short of food and other basic resources, there is widespread discontent. However, so far, Maduro has retained the backing of the powerful armed forces, as well as support from Russia and China.

Washington has moved decisively to seek the exit of Maduro by recognizing Guaido and urging the military to switch loyalties.

“We’ve seen Venezuelan official and military personnel heeding this call,” he added, citing the defection this weekend of the country’s military attache to Washington.

Bolton also would not rule out the use of US troops.

“The president has made it clear on this matter that all options are on the table,” he told reporters.

Guaido called for a two-hour strike on Wednesday, January 30, “to demand that the armed forces side with the people” ahead of a “big national and international rally” on Saturday.

His remarks came as the death toll in last week’s protests rose to 35, according to NGO workers, with the government security forces accused of killing another eight in “extra-judicial executions.”

Following a trip to Panama, Pope Francis said he was afraid the escalating crisis would become “a bloodbath.”

United Nations Secretary-General Antonio Guterres, meanwhile, offered to step in, saying he could provide “good offices to facilitate dialogue and negotiation between the parties.”

Along with China and Russia, Turkey and leftist regional allies Bolivia, Cuba and Mexico still back Maduro.

But a dozen Latin American countries have recognized Guaido and 6 European nations – Britain, France, Germany, the Netherlands, Portugal and Spain – have said they would follow suit unless Maduro calls elections by February 3.

US: PDVSA must drop Maduro

Mnuchin said PDVSA must cut itself off from Maduro in order to see sanctions dropped.

“The path to sanctions relief for PDVSA is through the expeditious transfer of control to the interim president or a subsequent, democratically elected government,” he said.

PDVSA’s US-based subsidiary Citgo will be able to continue operations, as long as its earnings are deposited into a blocked account in the United States.

Guaido, who declared himself acting president Wednesday, said he will begin the process of naming new boards for PDVSA and Citgo to “start recovering our industry that is going through a dark time.”

Lawmakers will be asked to take “the necessary measures to guarantee the greatest transparency and control of the use” of the assets, Guaido added.

“We took this decision to ensure that Citgo stays in the hands of Venezuelans.”

An angry Maduro nevertheless accused the United States of trying to “steal Citgo” and pledged to file legal action over the new sanctions.

Since being elected head of the National Assembly legislature last month, Guaido has managed to rally a previously disunited opposition.

Maduro has been in charge since 2013 but his re-election in May was branded illegitimate by the European Union, United States and Organization of American States.

Several opposition leaders had been forced into exile, jailed or barred from standing in the election, leading the opposition to boycott the poll. – Rappler.com