Jan 30, 2019 11:18 AM PHT
Agence France-Presse
Facebook Twitter Copy URL
Copied
The 35-year-old head of the National Assembly legislature 'is prohibited from leaving the country until the end of the [preliminary] investigation' for having 'caused harm to peace in the republic' 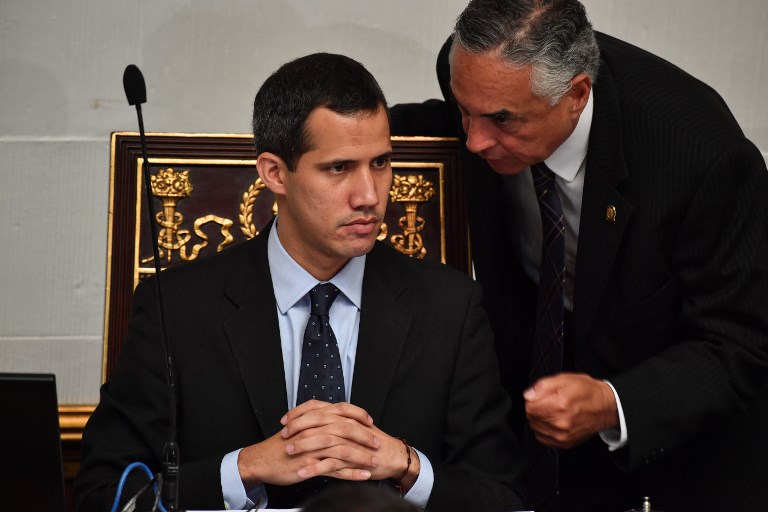 The 35-year-old head of the National Assembly legislature “is prohibited from leaving the country until the end of the [preliminary] investigation” for having “caused harm to peace in the republic,” high court president Maikel Moreno said.

The court is stacked with Maduro loyalists.

The move came after the State Department revealed that Guaido – the National Assembly head and self-proclaimed interim president – has been handed control of Venezuela’s US bank accounts.

US Secretary of State Mike Pompeo signed off on the order last week, which was then followed on Monday, January 28, by US sanctions targeting Venezuela’s state oil giant PDVSA, the cash-strapped government’s main source of hard currency.

“This certification will help Venezuela’s legitimate government safeguard those assets for the benefit of the Venezuelan people,” State Department spokesman Robert Palladino said in a statement.

Guaido shrugged off Maduro’s efforts to choke his progress as “nothing new.”

“I’m not dismissing the threats, the persecution at this time, but we’re here, we’re continuing to do our jobs,” he told reporters as he arrived at the National Assembly.

Guaido, who has been recognized as interim president by US President Donald Trump, sent a message to the country’s top court on Twitter warning that “the regime is in its final stage.”

“You shouldn’t sacrifice yourselves for the usurper and his gang,” he added.

In Washington, Trump’s national security advisor warned of “serious consequences” if any harm comes to the Venezuelan opposition leader.

“Let me reiterate – there will be serious consequences for those who attempt to subvert democracy and harm Guaido,” Trump advisor John Bolton tweeted.

The opposition-controlled legislature, meanwhile, named “diplomatic representatives” to a dozen countries that, like the US, have recognized Guaido as the interim president.

At the White House, US Vice President Mike Pence met with Guaido’s appointed charge d’affaires in the United States, Carlos Vecchio, to discuss the crisis.

The 35-year-old engineer stormed onto the political stage as a virtual unknown on January 3, when he was sworn in as the president of the National Assembly, a body that had been largely neutralized by the Supreme Court.

On January 23, he declared himself the country’s acting president and vowed to lead a transitional government that would hold democratic elections.

To keep up the pressure, he has called two more mass demonstrations against the government this week, and has appealed to the powerful military to change sides, offering amnesty to those who do.

At least 40 people have been killed in clashes with security forces nationwide and at least 850 arrested since January 21 when a brief military rebellion was put down in Caracas, according to the UN human rights office in Geneva.

‘Blood on his hands’

US Treasury Secretary Steven Mnuchin said the sanctions against PDVSA would prevent Maduro from diverting resources from the country until power could be transferred to an interim or democratically-elected government.

A furious Maduro, 56, said Trump would have “blood all over his hands” if violence breaks out in Venezuela.

In a tweet, he urged the opposition to “ignore the imperialist calls” and reiterated his offer of dialogue to Guaido. He has previously accused the US of trying to orchestrate a coup d’etat.

Gustavo Tarre, Venezuela’s new pro-Guaido representative to the Organization of American States, rejected the coup accusation and cast doubt on the staying power of Maduro’s regime, saying no one would defend him to the death.

Chinese foreign ministry spokesman Geng Shuang said his country opposes “unilateral sanctions” as they “will only complicate the situation and will not help solve practical problems.”

The oil-rich country is already reeling from a deep economic crisis that has pushed millions into poverty and driven 2.3 million more to migrate.

Hyperinflation, shortages of food and medicine and failing public services has spread misery, undermining support for a leftist regime that has held power for two decades.

He also reiterated Trump’s position that “all options are on the table.”

Acting Defense Secretary Patrick Shanahan did not rule out a US military deployment to Colombia.

But the Lima Group of Latin American countries and Canada is opposed to “military intervention” in the Venezuela, Peru’s Foreign Minister Nestor Popolizio said.