U.S., China resume trade talks with a chill in the air

Jan 30, 2019 11:44 AM PHT
Agence France-Presse
Facebook Twitter Copy URL
Copied
The world's two largest economies are battling for nothing less than future dominance in critical high-tech industries, according to US Trade Representative Robert Lighthizer, the lead US negotiator 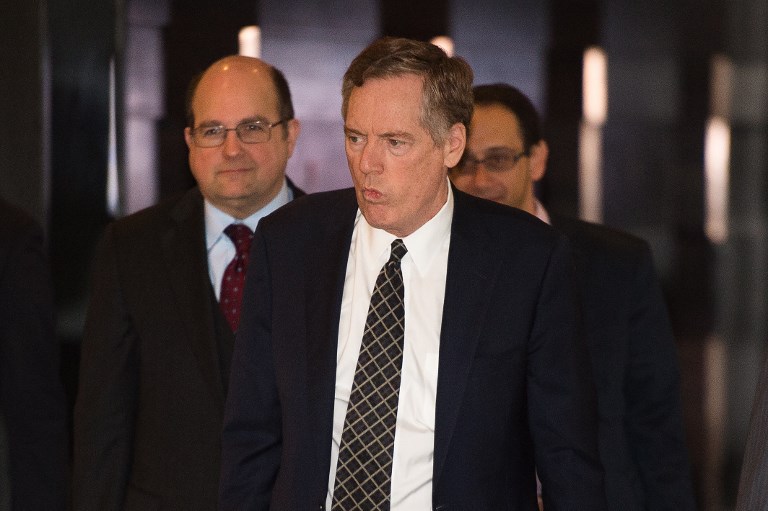 WASHINGTON DC, USA – Top US and Chinese trade officials return to the bargaining table on Wednesday, January 30, with extra tension in the atmosphere amid Washington’s sweeping prosecution of Chinese telecoms giant Huawei.

The world’s two largest economies are battling for nothing less than future dominance in critical high-tech industries, according to US Trade Representative Robert Lighthizer, the lead US negotiator.

A little over 3 years ago, Beijing launched a strategic plan dubbed “Made in China 2025” that aimed to make the nation the global leader in aerospace, robotics, artificial intelligence, new-generation autos and other areas – sectors US officials say now represent the “crown jewels” of American technology and innovation.

US President Donald Trump has repeatedly said he favors a healthy Chinese economy but not at the expense of American business and know-how.

In specific, US officials are attacking Chinese trade practices they say are unfair, spotlighting the forced transfer of American technology through requirements that foreign companies form joint ventures with local firms, as well as the alleged theft of American intellectual property through hacking.

To pressure Beijing, the White House has slapped tariffs on $250 billion in Chinese imports.

And Trump is poised to more than double US duty rates on $200 billion in goods from China to 25% on March 2 should the talks fail.

Beijing has responded by slapping duties on virtually every product it buys from the United States, or about $110 billion in exports.

Given the complexity of issues, a finished agreement is unlikely to emerge from the two days of talks in Washington this week.

But US Treasury Secretary Steven Mnuchin said Tuesday, January 29, he expected “significant progress,” and noted the governments have another month left in the 90-day truce declared in December.

Huawei unrelated? Sure it is…

A final agreement seemed even more distant on Monday, January 28, after the US Justice Department announced two indictments of the Chinese telecommunications giant Huawei on charges of stealing trade secrets, fraud, obstruction of justice and of a top executive accused of violating US sanctions on Iran.

But US officials insist the trade talks and Huawei prosecutions are not related.

But Monica de Bolle, senior fellow at the Peterson Institute for International Economics, said Tuesday the Huawei case could only complicate matters in the trade negotiations.

“Of course the Huawei issue does make the trade negotiation much more difficult. There is no doubt about that,” she told Agence France-Presse.

“The Huawei issue could make a kind of breakdown at some point more likely.”

Last year, US sanctions on another Chinese telecoms company, ZTE, sent waves through the trade negotiations, which produced no breakthrough.

In a sign the sides have are hopeful of making progress, Harvard-trained Chinese Vice Premier Liu He is due to meet Trump during this week’s talks.

Trump so far has projected optimism, believing Washington has the upper hand given China’s weakening economy.

But Trump also may appear weakened after agreeing last week to end a 5-week government shutdown without extracting any concessions from opposition Democratic lawmakers in a battle over building a wall on the Mexican border.

“The danger here is that other countries will conclude Trump is a paper tiger,” said Edward Alden, senior fellow at the Council on Foreign Relations.

“He blusters and takes very strong public positions, puts himself in situations he cannot win, and then meekly backs down and declares victory,” Alden added.

“It will reinforce that argument that China’s best strategy is to wait and to stonewall and Trump will back down.” – Rappler.com