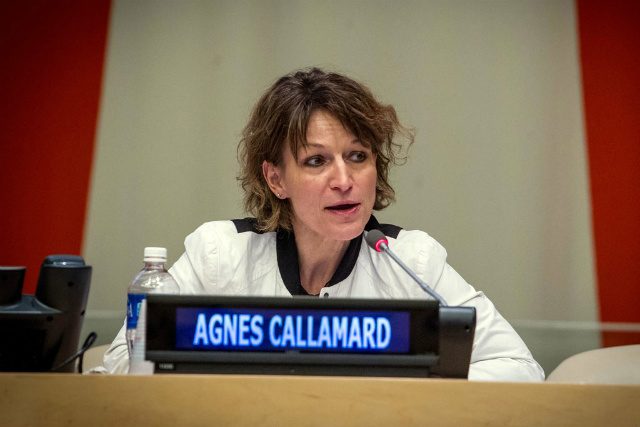 ISTANBUL, Turkey – A UN judicial expert tasked with investigating the murder of Saudi journalist Jamal Khashoggi said Tuesday, January 29, she would present her report by the end of May.

Agnes Callamard, the UN special rapporteur on extrajudicial, summary or arbitrary executions, carried out an inspection outside the Saudi consulate in Istanbul.

Khashoggi, a regime critic, was killed on October 2 at the consulate by a Saudi hit squad which Ankara says was sent from Riyadh for the murder.

Speaking to journalists outside the mission, Callamard said her report would be made public in time for the June session of the UN human rights council.

“The report will be made public a few weeks before I present it to the human rights council in Geneva, so end of May possibly,” she said.

She was due to meet later Tuesday with Istanbul chief prosecutor Irfan Fidan.

Riyadh, after denying the killing for two weeks, finally described it as a “rogue” operation and arrested a number of senior Saudi officials.

But the murder tipped the kingdom into one of its worst diplomatic crises. Nearly 4 months on, Khashoggi’s body has still not been recovered.

Callamard said her team contacted Saudi authorities for access for an inspection inside the consulate.

“We made a request to the Saudi government for access to the consulate, as well as meeting with Saudi authorities here and in Saudi Arabia,” she said.

“We are waiting for their response.”

Callamard and her team did not enter the consulate on Tuesday.

“To be fair the request to them has come quite late, so we need to give them a bit more time to process our request,” she said.

“We are respectfully calling on the authorities to give us access at some stage while we are here.”

The trial opened in Saudi Arabia this month of 11 men accused of involvement in Khashoggi’s murder with the attorney-general seeking the death penalty for 5 of the defendants.

Ankara accused Riyadh of failure to cooperate in the investigation and called for an international probe. – Rappler.com