Jan 31, 2019 5:27 PM PHT
Agence France-Presse
Facebook Twitter Copy URL
Copied
The global economic climate – roiled by Trump's trade war with China where Foxconn has most of its assembly lines – leads officials at Foxconn to look again at the plans 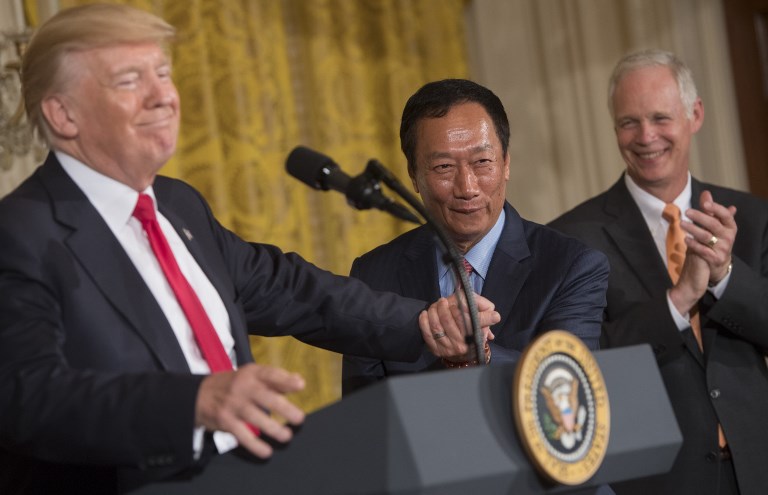 Foxconn, which makes devices and components for a host of major tech firms including Apple, had planned to build the $10 billion plant to make LCD flat screen televisions and create around 13,000 jobs.

The investment was backed by $4 billion in controversial tax breaks and embraced by Trump, who described it as evidence of his “America First” plan in action when announced in 2017.

A year later he appeared alongside Foxconn CEO Terry Gou at a groundbreaking ceremony proclaiming: “This is just the beginning. This is one of the largest plants in the world.”

But the global economic climate – roiled by Trump’s trade war with China where Foxconn has most of its assembly lines – has led officials at the Taiwanese company to look again at the plans.

“The global market environment that existed when the project was first announced has changed. As our plans are driven by those of our customers, this has necessitated the adjustment of plans for all projects, including Wisconsin,” Foxconn said in a statement Thursday.

In its statement, Foxconn said it remained committed to building its science park in Wisconsin and “the creation of 13,000 jobs”.

It added that “in addition to our consideration of plans to produce traditional products such as television sets” the company was also examining ways for Wisconsin’s “knowledge workers” to promote research and development and produce “high-tech applications and solutions”.

Woo also told Bloomberg there was “no scrapping of our plans”.

But he added: “Given global economic conditions and the trade tensions between China and the US… it’s impossible that we can always stay committed to our original plan without any change.”

As news of the announcement emerged and speculation about the future of the deal swirled, the firm released another statement insisting its was moving forward with “an advanced manufacturing facility in Wisconsin” and insisting it would create 13,000 jobs.

The update gave a list of facilities it planned to build in the next 18 months, including a “liquid crystal module backend packaging plant” – but it was unclear if that was the same as the factory promised by Guo in 2017.

Trump came to power on the back of a promise to revitalise US manufacturing and create millions of jobs, crucially wooing blue-collar workers.

However, the latest news could dent the image he likes to project of the dealer-in-chief who can deliver, and comes soon after he backed down in his standoff with Democrats over his Mexican border wall in a dispute that closed the government for a month.

“Trump claimed credit for Foxconn’s planned investment in manufacturing in the United States, repeatedly pointing to Foxconn’s promise as evidence that his economic agenda was working,” a statement from the Democratic National Committee said. “But now, Foxconn is looking at moving its manufacturing to China instead.”

Meanwhile the US economy showing signs of slowing just as campaigning for the 2020 election gears up, with the state of Wisconsin a key battleground.

While Trump has not responded to the Foxconn announcement CNN quoted an official as saying: “The president has created one of the strongest business climates in American history because he lowered taxes and massively cut regulations.

“While it’s encouraging Foxconn will bring 13,000 new jobs and billions of dollars to Wisconsin, we would be disappointed by (any) reductions to the initial investment.”

Foxconn, officially known as Hon Hai Precision Industry, is one of many key tech companies who find themselves buffeted by the trade war.

The world’s largest contract-electronics manufacturer assembles most of its products on the Chinese mainland but many of its gadgets are sold in the United States, leaving it vulnerable to Trump’s tariffs.

Its Wisconsin investment has not been without controversy.

The state’s Republican former Governor Scott Walker – a vocal supporter of the plant – was defeated last year by a Democrat who said the huge tax breaks offered to Foxconn risked negating the jobs it created.

It has also struggled to meet the hiring targets that were part of the deal. – Rappler.com