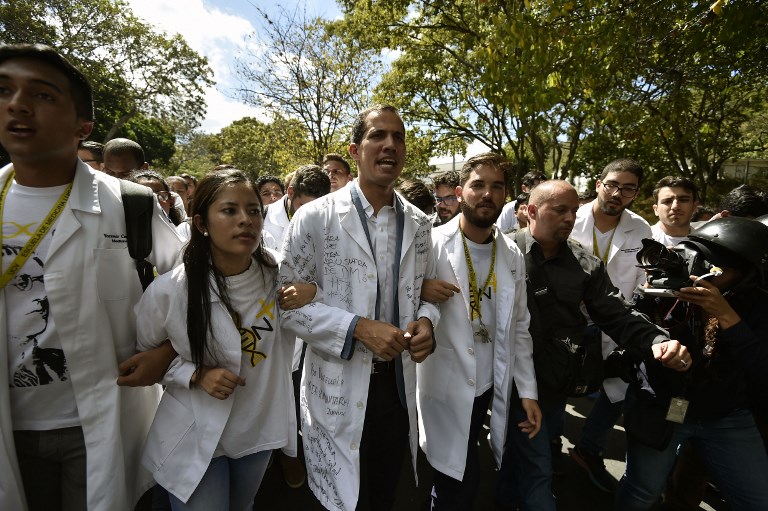 PARIS, France –  France and Spain called on Venezuelan authorities on Thursday, January 31, to immediately release foreign journalists who have been detained as part of a crackdown on international media.

Five foreign journalists, including two working for France’s “Quotidien” television show and one from Spain’s EFE news agency, have been arrested in Venezuela this week. Two more, from Chile, have been deported.

“We have been in contact with the Venezuelan authorities since the moment our nationals were arrested,” French foreign ministry spokeswoman Agnes von der Muhll said.

“We are demanding their release and are doing everything possible to obtain that as early as possible.”

The remarks were echoed by the Spanish foreign ministry, as well as EU diplomatic chief Federica Mogherini.

“The government again asks the Venezuelan authorities to respect the rule of law, human rights and fundamental freedoms, of which freedom of the press is a central element,” the Spanish ministry statement said.

Speaking at a meeting of EU foreign ministers in the Romanian capital Bucharest, Mogherini said that “our request is for them to be immediately released”.

Ahead of the Bucharest meeting, Britain’s foreign minister Jeremy Hunt had said he would press his EU colleagues for new sanctions against what he called Venezuelan “kleptocrats” as a way to step up pressure on Maduro. (READ: Guaido rules out risk of civil war in Venezuela)

No quick decision is expected as the legal basis for any sanctions would take some time to prepare and there are divisions between EU members states on how to respond.

Mogherini reiterated the EU’s call for new elections in Venezuela. The bloc has warned it will “take further actions” if new elections are not called in the coming days.

Several EU states including Spain, Britain, France and Germany have been more explicit, saying they will recognise Guaido as Venezuela’s leader if new polls are not called by Sunday. – Rappler.com