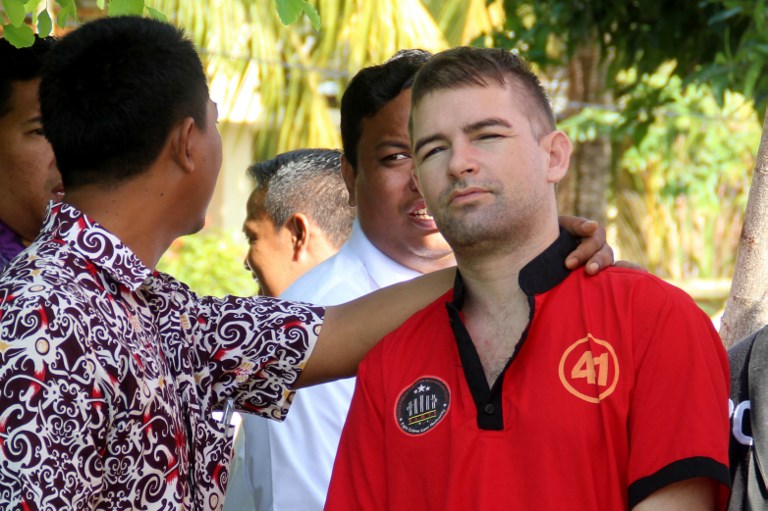 LOMBOK, Indonesia – An Indonesian police officer has been arrested for allegedly taking a bribe to help a French drugs suspect escape from jail, authorities said Friday, February 1, as the search for the fugitive continued.

The 35-year-old Frenchman was arrested in September allegedly carrying a false-bottomed suitcase filled with four kilograms (8.8 pounds) of drugs – including cocaine, ecstasy and amphetamines – at the airport on the holiday island next to Bali.

Dorfin was awaiting trial in a possible death penalty case when he fled.

Indonesia has some of the world’s strictest drug laws – including execution by firing squad for some traffickers.

The accused officer, who was only identified by her initials TM, received a wire transfer of some Rp 14.5 million ($1,040) from Dorfin’s parents before the escape, police claimed.

She used some of the wired funds to buy items for Dorfin including a mobile phone with a SIM card, and she also gave him a blanket which he may have used in the escape, according to authorities.

Dorfin’s parents could not immediately be reached for comment.

Authorities initially said they believed Dorfin sawed through iron bars on a second-floor window and then rappelled to freedom with sarongs and blankets tied together.

But they later said it was still unclear exactly how he made good on his escape.

Dorfin had also received packages from an unnamed woman in Bali, including one that contained a blanket, which is banned at the detention center, Salim said.

“The second package wasn’t checked” by security, he added.

“That was a fatal mistake – it might have contained a saw.”

The accused officer allegedly rebuffed concerns expressed by other police about Dorfin having a banned blanket.

A couple of security staff who were supposed to be working on the day of Dorfin’s escape also unexpectedly called in sick, Salim said, adding that their absence is being investigated.

Indonesia is riddled with corruption at all levels of society and jailbreaks are also common. Inmates are often held in unsanitary conditions at overcrowded and poorly guarded prisons.

In 2017, 4 foreign inmates tunnelled their way out of Bali’s Kerobokan prison.

A pair of the fugitives were captured a few days later, while two others – an Australian and Malaysian – are still on the run. – Rappler.com