Grim outlook for Aussie right points to another switch of PM

Feb 2, 2019 10:57 AM PHT
Agence France-Presse
Facebook Twitter Copy URL
Copied
Australian Prime Minister Scott Morrison may be forced to leave after less than a year on the job 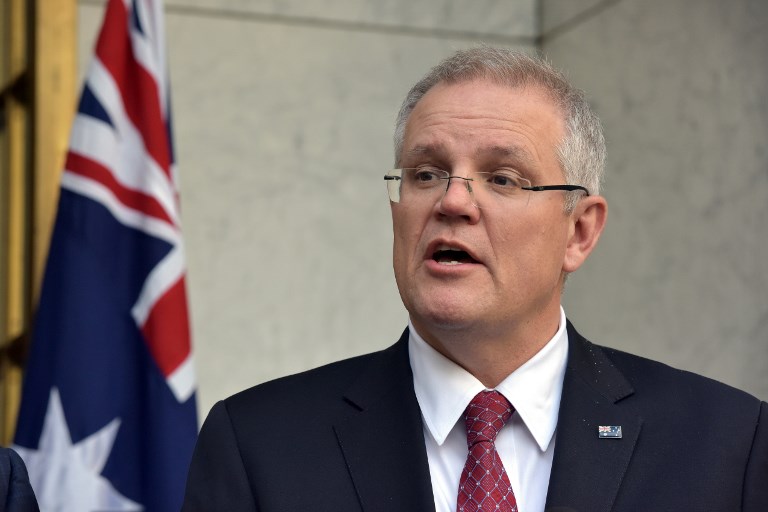 SYDNEY, Australia – While much of the West embraces the populist right, Australians are baulking at their government’s climate-sceptic tough-on-migrants message, with polls pointing to a change in government at this May’s election. (READ: Scott Morrison sworn in as new Australian PM after bitter coup)

As things stand, folksy Aussie Prime Minister Scott Morrison risks being turfed out after less than a year on the job – a short innings even in the self-styled coup capital of the democratic world.

Current polls show his conservative Liberal Party heading for its worst electoral defeat since 1983 and Australia getting a 7th change of prime minister in 10 years.

“The polling has really been consistently showing that the Labor Party are ahead by a significant margin,” said Glenn Kefford, a campaigns expert at Macquarie University.

“The sentiment out there is that the Labor party are headed for victory, it’s just a question of what the size of that victory will be.”

Facing an uncertain future, 3 of Morrison’s cabinet ministers have called it quits before the campaign gets into full swing.

All 3 cited personal reasons for their departure, a common occurrence in the dog days of a two-term government.

But the prospect of a contentious campaign followed by long periods languishing on the opposition benches undoubtedly made their decision easier.

Minister for Women Kelly O’Dwyer publicly described her motives for retiring as “complex”, but privately she is said to have complained that the coalition was seen as a bunch of “homophobic, anti-women, climate-change deniers.”

Liberal ministers sticking it out are increasingly facing difficult contests against a resurgent Labor and independent women furious at the government’s “blokeish” attitudes.

One commentator has dubbed it the revolt of the SPECS – socially progressive but economically conservative liberals.

This week Health Minister Greg Hunt became the latest member of the cabinet to see his political future thrown into doubt.

His former party colleague-turned-independent MP Julia Banks announced she would challenge him at the election, citing “unfinished business” with the party and railing against the pro-coal government’s failure to tackle climate change.

The Liberal response oscillated between furious denunciations of unspeakable treachery and an insistence she cannot possibly win.

Rather than propelling him along, some analysts believe the rise of the populist right may have sown the seeds for Morrison’s downfall.

His short tenure has seen some clouds gathering in Australia’s long-glittering G20 economy, stirred by Trump’s trade fight with China and jitters over Brexit.

Morrison has also been plagued by a debilitating battle between traditional small government liberals and Trump-emboldened supporters of a more hardline view of liberal politics.

The wounds from their successful ouster last August of centrist former party leader and prime minister Malcolm Turnbull have festered.

“It was a catastrophic blunder,” said political pundit William Bowe, who runs a popular blog called The Poll Bludger, pointing to public disdain for the continued musical chairs in Canberra.

The party’s hard right “got a rush of blood to the head and I think Brexit and Donald Trump fed into it”, said Bowe.

“Trump and Brexit have shown that populist right-wing programmes work if they are pursued aggressively and sold by an aggressive spokesperson.”

They sought to get rid of “this ‘milquetoast plutocrat’ Malcolm Turnbull and put in a tough political fighter, a bomb-thrower”.

The polls and a recent shock by-election win for an independent woman in a Sydney seat that the party held for decades seemed to show the Liberals badly misjudged the public mood.

But Morrison, a devout Christian, shows few signs of easing off, continuing to play to the base and presenting himself as a “fair dinkum” Aussie who you can have a beer with at a barbecue.

“There is a lot of rehashing of old debates and old culture wars,” said Kefford. “They want to try to get the base energized.”

It is an unusual and perhaps fateful strategy in a country where compulsory voting makes turnout – the normal aim of appeals to the base – almost irrelevant.

In some sections of the Liberal Party the postmortem has already begun. But Trump and Brexit have shown that conventional wisdom can be wrong.

“The political environment is challenging for the government,” admitted former Liberal foreign minister Julie Bishop at a speech in Hong Kong.

But she cautioned: “It is likely to become a much closer contest than many anticipate. My strong advice is do not write us off. That would be a mistake. Big mistake.” – Rappler.com