Feb 3, 2019 11:53 PM PHT
Agence France-Presse
Facebook Twitter Copy URL
Copied
'The fighting has stopped as we wait for the remaining civilians to leave,' says a fighter for the Syrian Democratic Forces 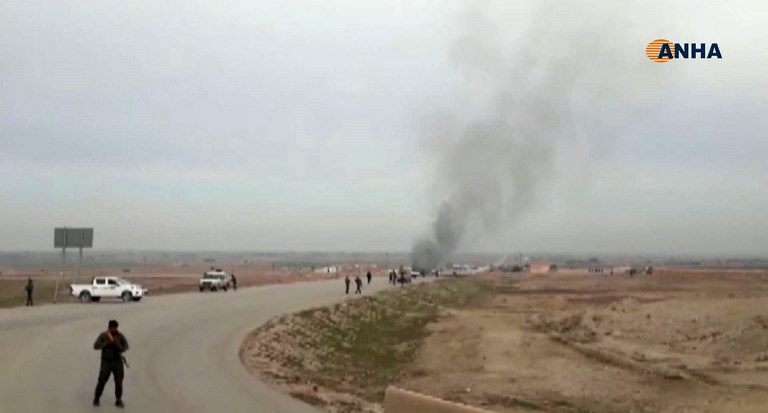 BAGHOUZ, Syria –  On a rooftop near the front line with the Islamic State group’s collapsing caliphate in eastern Syria, a US-backed fighter and his comrades sip tea as they await orders to restart the battle.

In the desert hamlet of Baghouz, held mostly by the SDF, 22-year-old Mohammed Ibrahim Mohammed points towards a dirt mound separating areas under their control and the jihadists.

“Since we arrived to this point almost six days ago we haven’t moved forward,” explained the young fatigue-clad man from the nearby town of Hajin, who joined the SDF just five months ago.

“The fighting has stopped as we wait for the remaining civilians to leave,” he said.

Just a few dozen meters away, on the other side of the dirt berm, trucks, motorcycles, and cars driven by ISIS fighters zip along the front line and out towards white tents further away, surrounded by women wearing long black robes.

“These are all Daesh houses,” said Mohammed, using an Arabic acronym for ISIS.

“Sometimes we see women coming to take wood” from nearby palm trees, he said.

The streets of Baghouz, which the SDF entered two weeks ago, are lined with the burnt-out skeletons of cars and bullet-pocked buildings, some of them completely destroyed.

SDF fighters group in clusters around some of the structures, tending small fires and exchanging small talk and cigarettes.

Others perch on balconies and roofs with a view over the other side.

On one terrace, a fighter uses binoculars to a get a closer look at jihadists just a stone’s throw away.

As the SDF, with air support from the US-led coalition, ramped up its offensive in recent weeks, thousands of civilians have poured out of the beleaguered jihadist-held pocket.

More than 36,000 people, mostly women, and children from jihadist families have fled since December via humanitarian corridors opened up by the SDF, according to the Britain-based Syrian Observatory for Human Rights.

That figure also includes some 3,100 jihadists, the war monitor added.

‘Civilians on the front lines’

But while hundreds of people a day reached SDF-held territory early last month, the flow has slowed to a trickle.

Recent arrivals say there are still many civilians and foreign fighters in the besieged pocket of territory.

With the final push paused, the eerie quiet is only broken by intermittent gunfire and the occasional roar of a coalition airstrike or artillery fire targeting jihadist positions.

In the neighboring village of Al-Shaafa, the SDF’s spokesman for the Deir Ezzor region said the assault has been put on hold to protect civilians.

“The jihadists are using the civilians as human shields to block our advance,” Adnan Afrin told Agence France-Presse.

That has forced women and children, including members of fighters’ families, to remain close to the battle.

“They are putting the civilians on the front lines,” he said, adding that airstrikes and artillery continued to target positions further back, “where the jihadists are concentrated”.

ISIS has shown a pattern of trapping civilians among its fighters in order to slow offensives as its cross-border “caliphate”, proclaimed in 2014, has withered under multiple offensives.

As the jihadists withdraw, they leave minefields and booby traps to slow their attackers and prevent civilians from escaping.

To help protect those that remain cornered, the SDF is pushing to open new “safe corridors” to help civilians escape before the US-backed force delivers the final blow, said Afrin.

And while SDF leaders prefer not to speculate on when the battle against the jihadists will finish, they are clear it will end by military means.

“We do not negotiate with terrorists,” Afrin said. – Rappler.com