Feb 4, 2019 9:08 PM PHT
Agence France-Presse
Facebook Twitter Copy URL
Copied
A senior South Korean presidential official says 'South Korea and the US have been working well together, and we have high expectations for the meeting between Pyongyang and Washington' 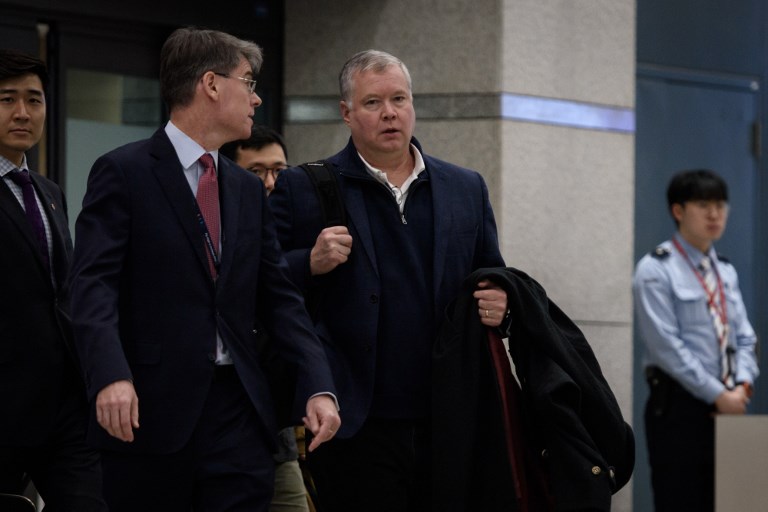 SEOUL, South Korea – The US special envoy for North Korea met Seoul’s top security advisor on Monday, February 4, a day before discussions with Pyongyang officials on the much-anticipated second summit between Donald Trump and Kim Jong-un.

Stephen Biegun briefed Chung Eui-yong on Washington’s stance ahead of a working-level meeting with the North’s delegation – expected to take place in the border truce village of Panmunjeom – to discuss the agenda of the summit.

Chung, the South Korean national security advisor, “conveyed our government’s assessment of the current situation and what needs to be done in the future,” the South’s presidential office said in a statement.

Security allies Seoul and Washington have at times pursued divergent approaches toward Pyongyang, with South Korea’s dovish President Moon Jae-in pursuing engagement while the United States insists pressure must be maintained until it denuclearizes.

But a senior South Korean presidential official told the Yonhap news agency that “South Korea and the US have been working well together, and we have high expectations for the meeting between Pyongyang and Washington.”

In an interview with CBS on Sunday, February 3, Trump said the date and venue of his upcoming second summit with the North Korean leader had been agreed – and would likely be announced before or during his State of the Union address on Tuesday, February 5.

Vietnam is seen as the most likely venue for the meeting, which is expected to take place late this month, and follows their landmark first summit in Singapore last June.

That meeting – the first-ever between the leaders of the US and North Korea – produced a vaguely-worded document in which Kim pledged to work towards “the denuclearisation of the Korean peninsula.”

But progress has since stalled with the two sides disagreeing over what that means.

Last week, US Director of National Intelligence Dan Coats told Congress that “North Korea is unlikely to give up all of its nuclear weapons and production capabilities.” – Rappler.com