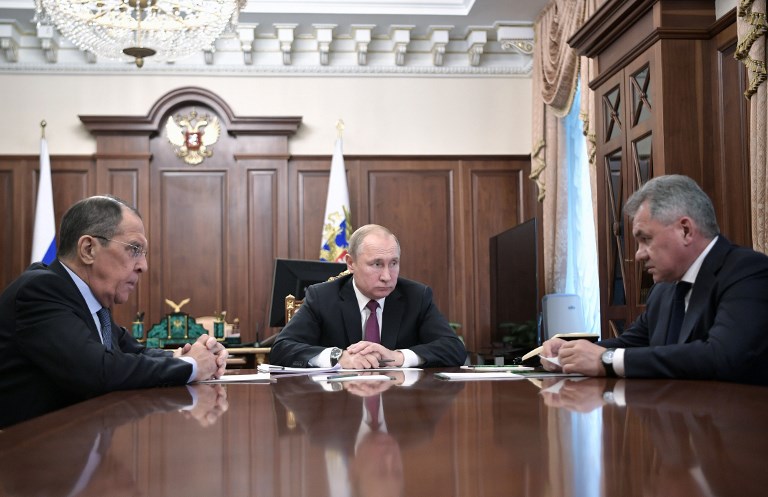 MOSCOW, Russia – Russia’s defense minister Sergei Shoigu on Tuesday, February 5, said the country must develop new types of missile systems in the next two years after Washington and Moscow ripped up a key arms control treaty.

The United States has repeatedly accused Russia of violating the Intermediate-Range Nuclear Forces (INF) agreement and on Friday, February 1, President Donald Trump said Washington was starting a process to withdraw from the treaty in 6 months.

In a tit-for-tat move on Saturday, February 2, Russian President Vladimir Putin said Moscow was also leaving the treaty and beginning work on new types of weapons that would breach the crucial Cold War-era agreement.

Many analysts say abandoning the 1987 treaty effectively signalled the start of a new arms race.

At a meeting with officials on Tuesday, Shoigu said Russia should develop two new missile systems in the next two years.

“During 2019-2020 we have to develop a land-based version of the seaborne Kalibr system equipped with a long-range cruise missile which showed good results in Syria,” Shoigu told defense officials.

“Over the same period we will also have to create a land-based missile system with a long-range hypersonic missile,” he said.

The defense minister said the plans had been approved by Putin.

The INF agreement forbids ground-launched, short- and intermediate-range missiles, but not those launched from the air or sea – which Russia already has.

Defense experts say converting seaborne and air-launched missile systems for ground use will be advantageous for Russia since producing such missiles will be cheaper and quicker.

“The use of seaborne and air-launched missiles will allow us to significantly reduce the time needed to produce the new missiles as well as financing for them,” Shoigu said.

He also tasked defense officials with extending the maximum range of ground-based missiles that are being developed.

Defense experts say because ground-based intermediate-range missiles are cheaper, Russia could theoretically place more of them within range of European targets.

Speaking to Shoigu on Saturday, Putin said Russia would not put any such missile “in Europe or other regions of the world” unless the United States did so first.

Military experts were hard-pressed to say what hypersonic missile Russia planned to develop in response to Washington’s exit from the INF treaty.

“We have plenty to choose from,” pro-Kremlin defense analyst Igor Korotchenko told Agence France-Presse (AFP), noting the Dagger missile was just one such system.

Korotchenko, who is editor of the National Defense journal, said it would be fairly easy to convert the seaborne Kalibr system for ground use as the defense ministry just needed to develop a land-based mobile launcher.

The INF treaty was signed in 1987 by then US president Ronald Reagan and Soviet leader Mikhail Gorbachev and resolved a crisis over Soviet nuclear-tipped ballistic missiles targeting Western capitals.

Experts say the United States and Russia abandoning of the INF treaty delivered a huge blow to the global arms control regime and international security.

The last nuclear arms control treaty between Washington and Moscow – the New START treaty – expires in 2021 and most analysts expect it will not be extended.

“We are on the brink of a new arms race,” said Konstantin Makiyenko, deputy head of the Centre for Analysis of Strategies and Technologies, a defense think tank in Moscow.

He said it was a contest Russia would not win.

“The losses will outweigh any ephemeral benefits,” he told AFP, suggesting Russia may be at a disadvantage as Washington would develop and deploy new ground-based intermediate-range missiles quickly.

“The United States’ industrial, scientific and technical might is stunning.” – Rappler.com