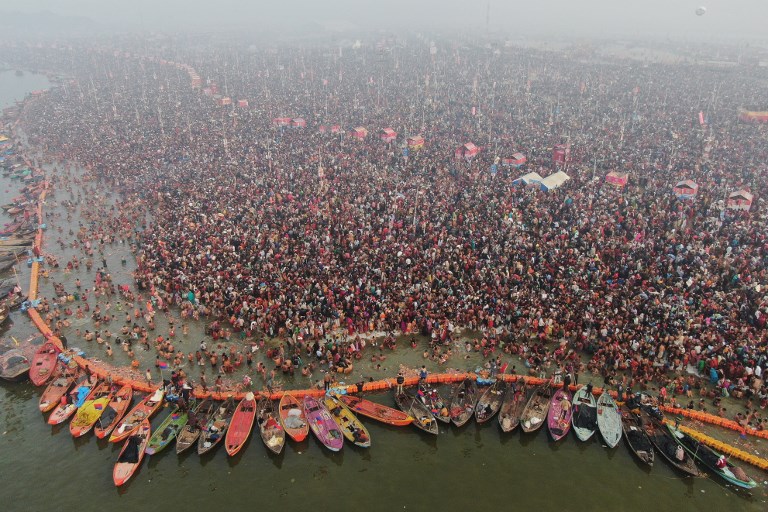 The gigantic crowds thronged the confluence of 3 rivers, one of them mythical, in northern India over Sunday, February 3, and Monday, February 4.

The Mauni Amavasya – or new moon day – on Monday, is the most auspicious day of the 48-day Kumbh Mela festival.

Numbers were bigger than expected and now over 120 million people have visited the Kumbh since it began in mid-January, more than were expected for the entire festival running until March 4.

“We are not throwing random figures about the number of visitors to the Kumbh. Our calculations are based on observation from drone cameras and helicopters,” Rajeev Rai, a senior official, told Agence France-Presse.

Hindus believe bathing at the meeting point of the Ganges, the Yamuna and the mythical Saraswati at the festival – home to a vast tent city bigger than Manhattan – brings salvation.

According to Hindu mythology, gods and demons fought a war over a sacred pitcher, or Kumbh, containing the nectar of immortality. A few drops fell to earth at 4 different locations – one being Allahabad.

The historic city was recently renamed Prayagraj by the local state’s Hindu nationalist government but is still widely known as Allahabad, the name it was given by Muslim rulers hundreds of years ago.

The festival has one more major bathing day on February 10. – Rappler.com