Feb 6, 2019 11:40 PM PHT
Agence France-Presse
Facebook Twitter Copy URL
Copied
NATO Secretary General Jens Stoltenberg says it is a 'historic day' which will lead to Macedonia becoming the 30th alliance member once the deal has been ratified by all the other capitals 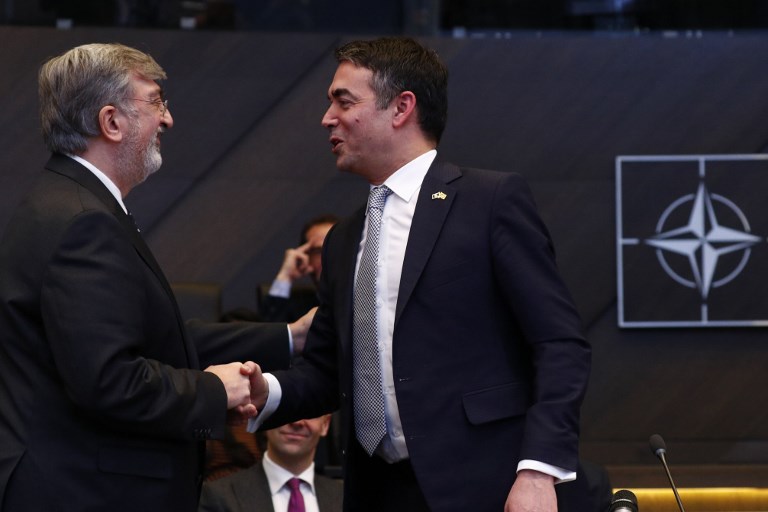 NATO Secretary General Jens Stoltenberg said it was a “historic day” which will lead to Macedonia becoming the 30th alliance member, once the deal has been ratified by all the other capitals.

NATO and the EU welcomed the move as bringing more stability to the Balkans, but the alliance’s expansion into the region has been opposed by Moscow, which regards it as part of its own “sphere of influence.”

After signing the accord with representatives of current NATO members at alliance headquarters in Brussels, Macedonian Foreign Minister Nikola Dimitrov said membership would make his country safer.

“What’s important for us is we’ll never walk alone again and we stand beside these 29 allies able and ready to assume the obligations arising from our full membership,” Dimitrov said.

Stoltenberg said the move would bring “more stability to the Western Balkans,” adding that he looked forward “to seeing thirty Allied flags fly outside NATO headquarters.”

“I want to congratulate both Skopje and Athens for showing commitment and courage in reaching an agreement on the name issue. We can now look to the future,” Stoltenberg said.

The agreement last month with Greece to change the name of the former Yugoslav republic to the Republic of North Macedonia ended one of the world’s longest diplomatic disputes and paved the way for Skopje to join NATO and the European Union.

Macedonian Prime Minister Zoran Zaev said it was a “great, historic day for all our citizens.”

“Today the largest security alliance in the world, NATO, has welcomed us,” he wrote on Facebook and Twitter.

“We have provided lasting stability for our country.”

The EU’s enlargement commissioner Johannes Hahn also tweeted congratulations, saying the move was “a contribution to peace and stability” in the Western Balkans.

But Macedonia’s moves to join NATO, following Montenegro’s admission in 2017, have ruffled feathers in the Kremlin.

Washington has accused Moscow of meddling in the region, including in last year’s referendum in Macedonia on changing its name.

For many countries once in the Soviet orbit, NATO membership, with its guarantee of mutual defense, provides a welcome insurance policy against possible Russian incursions.

Macedonia will now take part in NATO ministerial meetings as an invitee, Stoltenberg said, starting with a gathering of defense ministers in Brussels next week.

For Skopje to progress to full membership, all 29 current members must ratify the accession protocol. How long this will take depends on national procedures, but when Montenegro joined in 2017 it took about a year.

Dimitrov said Macedonia was determined to meet the NATO spending pledge of devoting at least 2% of GDP to defense by 2024. – Rappler.com