U.S. promises to keep up ISIS fight after its defeat

Feb 7, 2019 10:06 AM PHT
Agence France-Presse
Facebook Twitter Copy URL
Copied
'Rest assured, we'll do what it takes to defeat every ounce and every last person within the ISIS madness and defend our people from radical Islamic terrorism,' Donald Trump says 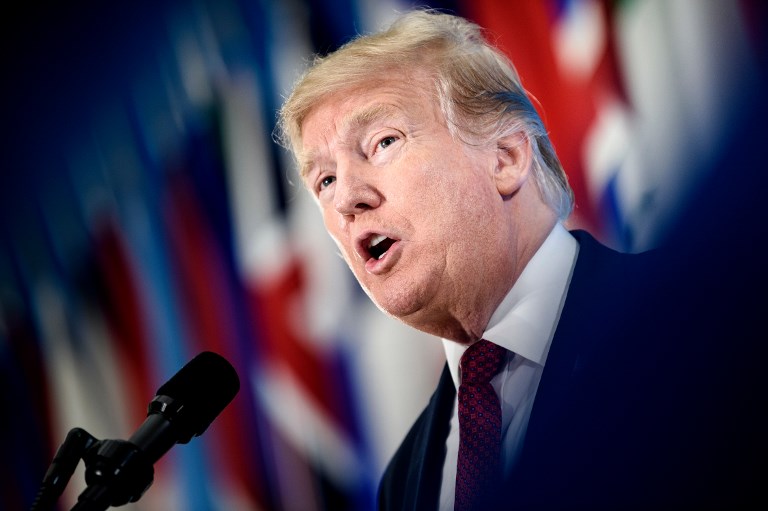 WASHINGTON, DC, USA – The United States promised Wednesday to stay focused on permanently destroying the Islamic State group (ISIS) but asked concerned allies to contribute more, as President Donald Trump boasted that the extremists will soon have lost all their territory in Syria.

Trump addressed officials from more than 70 countries who came to Washington to discuss ways ahead in the battle against ISIS, after Trump stunned many of them in December by declaring victory and ordering all 2,000 troops out of Syria.

Speaking at the State Department, Trump said that US-led troops and their Kurdish allies had “liberated virtually all of the territory” from the jihadists who once controlled a vast stretch of Syria and Iraq in a self-styled caliphate.

“It should be formally announced some time next week that we will have 100% of the caliphate,” Trump said.

“Remnants – that’s all they have, remnants – but remnants can be very dangerous,” Trump said.

“Rest assured, we’ll do what it takes to defeat every ounce and every last person within the ISIS madness and defend our people from radical Islamic terrorism,” he said.

The conference comes amid behind-the-scenes efforts to manage the unintended consequences of the US pullout, including keeping peace between Turkey and Kurdish fighters and finding a solution for hundreds of foreign jihadists jailed in Syria who Washington says should be repatriated by their home countries.

But the one-day event did not immediately produce major announcements. And US leaders were partly focused on domestic priorities, with Trump using the occasion to vow a hard line on immigration and Secretary of State Mike Pompeo taking unsubtle digs at previous president Barack Obama.

The conference did not include representatives from Syria Bashar al-Assad or Russia and Iran, which have said they are seeking to defeat the Islamic State group as they shore up his iron-fisted rule.

Opening the conference, Pompeo described Trump’s troop pullout as a “tactical change” with extremists increasingly scattered around the world.

“It is not a change in the mission,” Pompeo said, adding “our fight will not necessarily always be military-led.”

“We are entering an era of decentralized jihad so we must be nimble in our approach as well,” he said.

Officials say that the US withdrawal will happen, although at a slower pace than Trump first intended.

The US representative who was in charge of the coalition, Brett McGurk, resigned along with defense secretary Jim Mattis in protest over Trump’s decision.

And Trump’s own intelligence chief, Dan Coats, warned last week before Congress that the Islamic State group would try to stage a comeback as troops withdraw.

Hoping to avoid the worst outcomes, Pompeo asked US partners to step up intelligence-sharing and to make up a $350 million shortfall in a fund intended to bring stability to Iraq.

“Now is the time for all of us, not just America, to put our money where our mouth is,” Pompeo said.

German Foreign Minister Heiko Maas voiced approval that Trump made clear that his troop withdrawal from Syria as well as from Afghanistan “doesn’t mean that the United States will no longer take on its leading role in the fight against ISIS.”

“Now it is important that in the upcoming weeks that we talk about how this will be organized and who will take on which tasks,” Maas told reporters.

One key item under discussion is whether to set up a buffer zone along the Syrian border with Turkey.

The Kurdish-led Syrian Democratic Forces, who were at the forefront of the battle that crushed the Islamic State, have warned that they may no longer be able to guard prisons housing jihadists from France, Britain and other foreign countries after the US withdrawal if Turkey attacks.

Turkish President Recep Tayyip Erdogan, who spoke to Trump before the pullout orders, has vowed to crush the Kurdish fighters in Syria, linking them to separatists at home.

Speaking in Washington, Turkish Foreign Minister Mevlut Cavusoglu pledged that Ankara would work to avoid “power vacuums that could be exploited by terrorists.”

Foreign powers have largely come to believe that Assad will survive the grisly, multi-fronted war in which more than 360,000 people have died since he put down protests in 2011.

But the United States and its close European and Arab allies in a joint statement in Washington said they still believed there was “no alternative to a political solution” in Syria. – Rappler.com