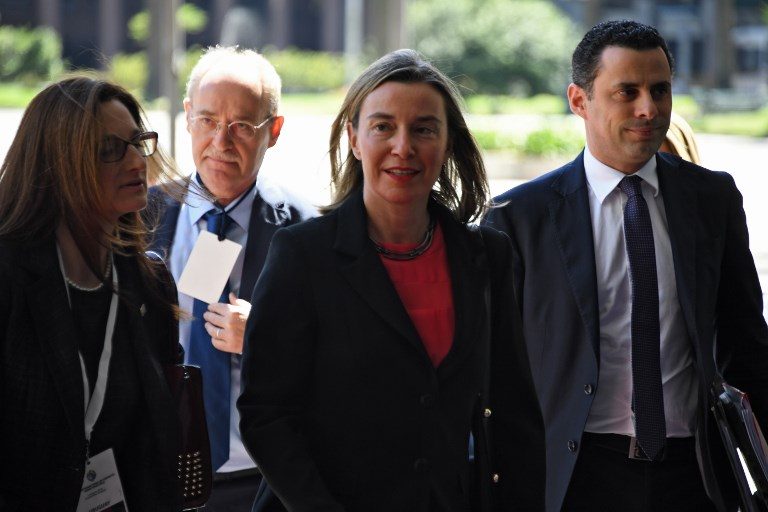 Facebook Twitter Copy URL
Copied
All eyes are on the Venezuelan border, where the armed forces have blocked an intended route into the country for desperately-needed humanitarian aid, heightening tensions with Washington

MONTEVIDEO, Uruguay – Ministers from more than a dozen European and Latin American states began meeting Thursday, February 7, in Montevideo to negotiate a solution to the Venezuelan crisis as President Nicolas Maduro and opposition leader Juan Guaido clashed in Caracas over allowing humanitarian aid into the crisis-wracked country.

The European Union, 8 other European countries and 5 Latin American nations began meeting in the Uruguayan capital with the goal of creating conditions for a peaceful political process.

“The objective of this first meeting… is to build common understanding on the situation in Venezuela and possible ways to have the country achieve a peaceful and democratic solution through fresh, credible presidential elections in line with the international standards,” said EU foreign affairs spokeswoman Maja Kocijancic.

But all eyes were on the Venezuelan border, where the armed forces have blocked an intended route into the country for desperately-needed humanitarian aid, heightening tensions with Washington.

Hundreds of Venezuelan migrants gathered at Cucuta on the Colombian side of the border to see if they could receive some of the aid being stockpiled in nearby warehouses.

Yajaira Gonzalez, 64, said she was begging Maduro to let through the aid – food, medicine and personal hygiene kits – to her desperate compatriots back home.

“It is not like you say – that we are doing OK,” said Gonzalez, referring to Maduro. “Mr. President, we are not OK. We are suffering.”

Gonzalez said she used to be a Chavista – a supporter of Maduro’s predecessor, the late socialist firebrand Hugo Chavez – but not anymore.

Dajelys Lopez crossed from the other side of the border with her baby in a stroller to see if she could find in Cucuta what she cannot get in Venezuela.

“Yesterday a friend died because he suffered a seizure and did not have medication to deal with it,” Lopez said.

-‘Contact Group’-
The Montevideo initiative, originally launched by Mexico and Uruguay as a “neutral countries” conference on Venezuela, has evolved into a meeting of a “Contact Group” launched by the EU in late January, and joined by Costa Rica, Bolivia and Ecuador.

On Wednesday, February 6, Maduro – having rejected an EU ultimatum on organizing snap presidential elections – welcomed the meeting and expressed support for “all steps and initiatives to facilitate dialogue.”

But Guaido, who on January 23 declared himself Venezuela’s interim president and is now recognized by 40 countries, has strongly rejected any talks with the government, dismissing it as a way for Maduro to buy time.

“The opposition … will not lend itself to any kind of false dialogue,” he reiterated Wednesday.

Guaido has warned the army of its responsibilities after soldiers blocked a key border bridge, sparking angry demands from the United States to allow the humanitarian aid through.

Venezuela’s army had to choose between “a dictatorship that does not have an iota of humanity, or to side with the constitution” from which he takes his legitimacy, Guaido said in an interview on Colombian radio.

US Secretary of State Mike Pompeo said Venezuela’s military was deliberately blocking the aid “under Maduro’s orders.” Washington has pledged $20 million in aid, while Canada has pledged $40 million and the EU $7.5 million.

Maduro, who is supported by Russia, China, Turkey, Cuba and Iran, has refused all humanitarian aid shipments to Venezuela, which he says would open the way to allow a US military invasion. The 56-year-old has repeatedly accused the United States of fomenting a coup.

He dismissed the need for aid on Wednesday as a “political show.”

But while tensions remained at a peak, participants in Thursday’s meeting intended to “find a way between” the positions of US President Donald Trump and Russia’s Vladimir Putin, Turkey’s Recep Tayyip Erdogan and others, an EU source told Agence France-Presse (AFP).

It is “not easy,” added the source, whose delegation is being headed by EU foreign affairs chief Federica Mogherini.

Even around the negotiating table, views are divided.

On Wednesday, ahead of the meeting, Uruguay and Mexico – among the few Latin American countries that did not recognize Guaido – proposed a dialogue without pre-conditions.

“If we demand elections at this time, we impose conditions that make dialogue difficult,” Uruguayan Foreign Minister Rodolfo Nin Novoa said in a joint statement of the two governments.

Meanwhile among the Europeans, France, Germany, Britain, the Netherlands, Portugal, Spain and Sweden are among the 21 out of 28 EU member states that officially support Guaido. Italy has not done so.

Mexico agreed to attend the meeting, but did not wish to formally join the Contact Group.

Above all, the EU diplomatic source told AFP the meeting was about agreeing on “working methods.”

Meanwhile, 35-year-old National Assembly chief Guaido has continued to ramp up pressure on the regime with a series of mass protests, the next of which is scheduled for February 12.

His fledgling alternative administration will hold talks in Washington on February 14 on responding to “the largest hemispheric humanitarian crisis in modern history.” – Rappler.com