Feb 8, 2019 8:57 PM PHT
Agence France-Presse
Facebook Twitter Copy URL
Copied
The accord is the eighth attempt in nearly 6 years to forge peace in the war-ravaged country, where human rights groups have documented a long list of murders, extra-judicial killings, torture and rape 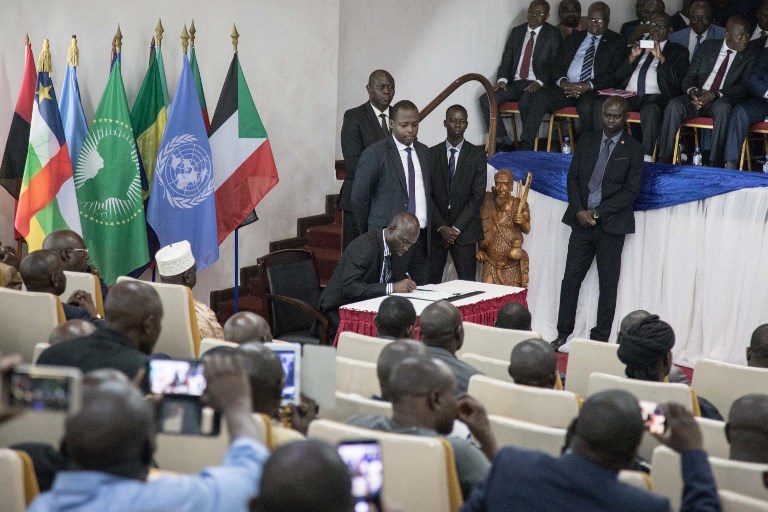 LIBREVILLE, Gabon – The Central African Republic will shortly set up a truth and reconciliation commission to shed light on its violent past, under a peace deal signed by the country’s beleaguered government and militia groups.

The accord, agreed in Khartoum by the CAR and 14 militia groups who control most of the country, has boosted hopes of an end to a long and bloody conflict in one of the world’s most troubled states.

But the deal has been shadowed by doubts about what it actually contains – details have been kept under wraps until the last 3 parties to the accord sign it.

A copy of the accord obtained by Agence France-Presse on Friday, February 8, spells out important confidence-building measures but is muted on the thorny issue of whether warlords will be amnestied.

One of its most important provisions is to set up a “truth, justice, reparation and reconciliation commission” within 90 days.

The panel will be tasked with “identifying and proposing any action likely to be taken in the area of justice,” it says.

Parties to the deal also commit to setting up joint security patrols with soldiers and members of armed groups for two years.

Militia patrolmen who join these patrols will have had “sufficient training of two months,” says the accord.

The accord is the eighth attempt in nearly 6 years to forge peace in the war-ravaged country, where human rights groups have documented a long list of murders, extra-judicial killings, torture and rape.

The goal is to set out down a pathway to peace between militia groups who control most of the country and the UN-backed government.

The accord was initialled in the Sudanese capital on Tuesday, February 5, before being signed in the capital Bangui on Wednesday, February 6, by some militia leaders and President Faustin-Archange Touadera.

The 3 other signatories may sign during the upcoming summit of the African Union (AU), taking place in Addis Ababa on Sunday, February 10, and Monday, February 11, according to government spokesman Ange Maxime Kazagui.

Conflict in the CAR has left thousands dead and forced an estimated quarter of the population of 4.5 million from their homes. The rural exodus, the UN warned last year, could drive the country into famine.

The crisis erupted in 2012, when a mainly Muslim rebel movement called the Seleka rose in the north of the country.

France, the former colonial ruler, intervened militarily under a UN mandate as fears grew of a Rwandan-style genocide.

The Seleka were forced from power and in February 2016, Touadera, a former prime minister, was elected president.

A UN peacekeeping force of some 13,000 troops and police has been deployed in support of Touadera.

But militia groups – typically portraying themselves as defenders of a community or religious group – still control some 80% of the country.

Fighting often erupts between these forces over control of mineral resources, which range from gold and diamonds to uranium.

One of the biggest stumbling blocks on the road to peace has been demands by rebel leaders to be granted amnesties – a condition that Touadera, under pressure from western partners, has traditionally refused.

Several leaders face UN sanctions or have been accused by rights groups of abuses, and others face the notional risk of arrest in CAR itself.

A Special Criminal Court opened last year, tasked with determining cases involving violations of human rights or international humanitarian law committed since 2003, including war crimes and genocide, although it says its scope is likely to be limited by funds.

The peace agreement makes no mention of any amnesty but notes that the president has a “discretionary right of pardon” which may be invoked to “sustain the dynamic of reconciliation.”

The “reintegration” of militia leaders will be vetted on a “case-by case” basis by a mixed panel, the text adds.

The document also says there will be an “inclusive government” – another notorious stumbling block – but gives no details as to its composition.

The 14 armed groups similarly undertake to “respect the legitimacy of the (CAR’s) democratic institutions.”

And the accord says that a “law” will be passed to determine the status of former heads of state.

This is a long-standing demand of Bozize and Michel Djotodia, who ousted him in 2013. – Rappler.com