Dogs have their day at revived New York museum 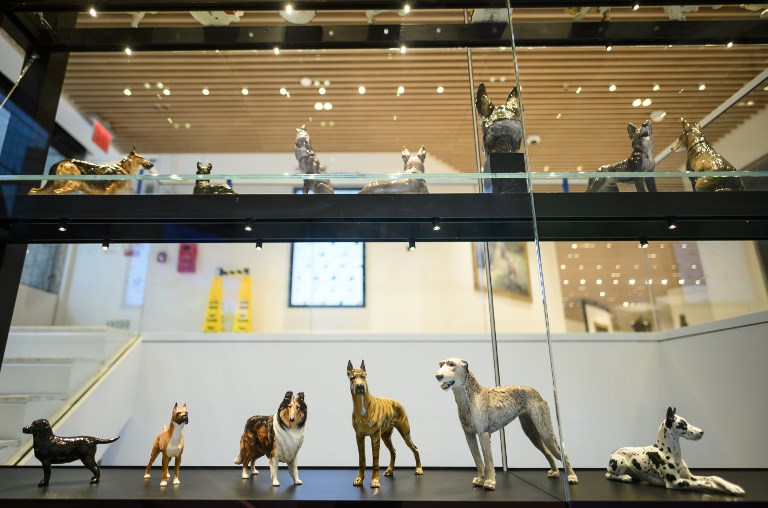 NEW YORK, USA – Dogs play cameo roles in some of the West’s most iconic paintings, yet man’s best friend has arguably gotten short shrift in the global museum hierarchy.

But a museum addition in Manhattan restores the animals to what canine afficionados will no doubt view as their rightful place at the center of the picture.

The American Kennel Club’s Museum of the Dog, which opened Friday, February 8, in midtown Manhattan, contains a smorgasbord of works of varying aesthetic ambition, along with interactive displays.

The museum’s opening has been timed to coincide with the start of Westminster Week, an annual mid-winter canine fest that attracts dogs and dog-lovers from around the world and culminates with the Westminster Dog Show on Tuesday night and the selection of “Best in Show” at Madison Square Garden.

The collection comprises more than 2,000 paintings, photos, sculptures and artifacts and includes a healthy supply of works that document what the ancestors of today’s pets looked like in the 19th century and earlier. These include the skeleton of “Belgrade Joe,” a Fox Terrier that died in 1888 and is seen as a seminal figure in that breed’s evolution.

Some works are photograph-like depictions of breeds that will appeal to dog-showing professionals.

“They look at the painting as they would a show dog and they critique it that way – by the anatomy, the way it’s built and so forth. There’s nothing about how it was rendered or anything like that,” said Alan Fausel, the museum’s executive director, who specialized in canine art with private auction houses before being hired to lead the museum in 2018.

“The average person will be interested in things that have some action, some activity, some narrative content,” added Fausel, who wants the museum to satisfy both the show dog industry professional and the everyday visitor.

Paintings of dogs evolved from pre-Victorian depictions that emphasized carnal aggression, to 19th century portraiture to 20th century works that anthropomorphize the creatures once photography largely obviated more naturalistic works, according to Fausel.

The museum itself dates to 1982 when it was first established in New York before relocating in 1987 to St. Louis, where it stayed for 37 years in the sleepy outskirts of the midwestern city.

The move to New York, which is home to myriad collections ranging from the Museum of Sex to the Tenement Museum to the Metropolitan Museum and other prestigious attractions, gives the collection more prominence. Its location near Grand Central Station figures to attract foot traffic.

“It’s great to show the collection that had been languishing in obscurity,” said Fausel.

“It’s also great to tell people who the AKC is and what we do.”

The collection includes depictions of Millie, the English Springer Spaniel that lived in the White House as the pet of the late president George H.W. Bush and wife Barbara, as well as “Silent Sorrow,” a poignant rendering of King Edward VII’s Fox Terrier mourning its master’s sudden death that may remind viewers of Sully, the Labrador Retriever who went viral last year after he was photographed sleeping next to Bush’s coffin.

The museum features interactive displays, including a rather tongue-in-cheek one that helps visitors discover which breed they most resemble, and advice on training, as well as a sample of some 15,000 documents contained in a canine library.

A smart-phone application provides details about many of the displays, though Fausel confesses that the museum hasn’t nailed down the complete history of each item. For example, a 1902 painting of two growling Irish Terriers with the British Parliament in the background is titled “Irish Members,” but Fausel isn’t certain of the exact context of the work, which was painted by Brit Maud Earl.

The museum is targeting perhaps 100,000 visitors in its first year, but Fausel expects to organize a series of special exhibits that could potentially have broad appeal. These include shows on dogs in Hollywood, presidential dogs and the biological evolution of the beloved creatures. – Rappler.com