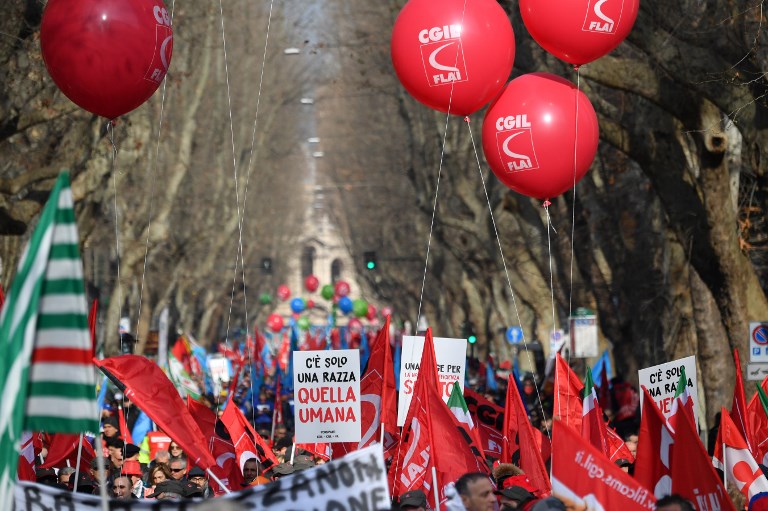 ROME, Italy – Hundreds of thousands of people demonstrated in Rome on Saturday, February 9 led by unions demanding pro-growth policies from the populist government, the biggest such protest in four years.

No violent incidents were reported at the gathering.

Unions had helped protesters from elsewhere make their way to the capital using 12 special trains, 1,300 coaches, ferries and low-cost flights.

Holding banners with slogans such as “A future for work”, demonstrators called for a massive publicly and privately funded investment program, and further-reaching reforms than what the government – made up of the far right League party and the anti-establishment Five Star Movement – is currently offering.

Italian unions have called investment plans announced by the government too cautious, its pension reform plan not far-reaching enough and have also criticized a plan to pay the poorest Italians a monthly income, saying it undermines the fight against both poverty and unemployment.

The new boss of the CGIL union which claims 5.5 million members, Maurizio Landini, said investment had fallen by 30 percent over the past decade.

“The government must change direction, we already have one foot in recession,” said Annamaria Furlan, the head of Italy’s second-biggest union CISL.

“It needs to come out of its virtual reality and face the reality of our work,” she said.

The Italian economy contracted in the fourth quarter of 2018 because of a slowdown in exports, plunging the eurozone’s third-largest economy into a technical recession and increasing the government’s budgetary problems.

Italian unions feel overlooked by the government and did not take well to an encounter between Five Star Movement chief Luigi Di Maio with members of the “yellow vest” protest in France which caused a diplomatic uproar between Paris and Rome.

“It is unusual, to say the least, that a deputy prime minister finds the time to meet opponents of the government in a neighboring country but doesn’t have the time to meet with the opposition in his own country, i.e. the unions,” Landini said on Friday.

Saturday’s demonstration was the biggest since mass demonstrations just over 4 years ago against reform plans by the then-prime minister Matteo Renzi.

Meanwhile, an Italian version of “yellow vest” protests, also planned for Saturday, was cancelled by police because of fears of violence. – Rappler.com