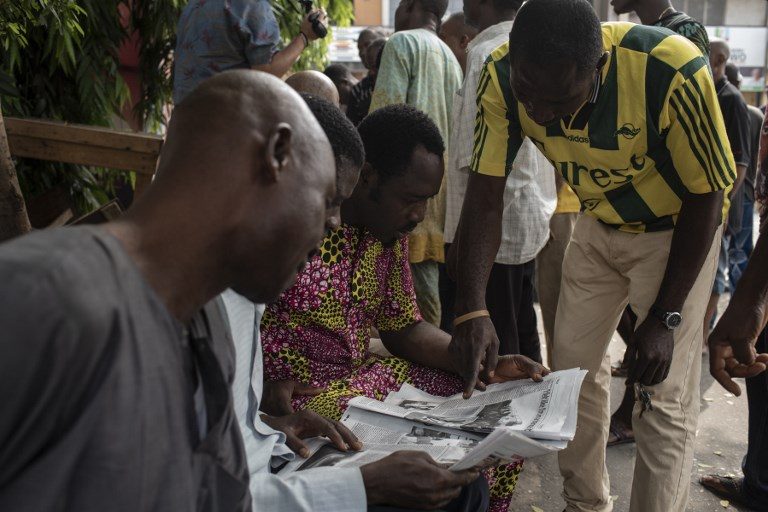 Facebook Twitter Copy URL
Copied
'If you want to postpone the election, then you can do so one week beforehand, but you can't just postpone a few hours before,' says leading opposition candidate Atiku Abubakar

ABUJA, Nigeria – Nigerians hoping to cast their ballots in elections set for Saturday, February 16, were instead turned away from polling stations after the electoral commission’s snap decision to delay the vote by a week.

President Muhammadu Buhari said he was “deeply disappointed” by last-gasp postponement and called for calm, as rumors swirled on both sides of a plot to rig the vote.

Leading opposition candidate Atiku Abubakar said he was “absolutely not” comfortable with the delay, while urging his supporters to be patient.

“If you want to postpone the election, then you can do so one week beforehand, but you can’t just postpone a few hours before,” he told reporters.

Both Buhari, 76, and Abubakar, 72, headed to Abuja from their home towns in northern Nigeria for a meeting with electoral officials to discuss the postponement.

Many voters were caught unaware by the early morning announcement and arrived at polling places to find the doors barred and staff absent.

“Why didn’t they announce the delay earlier? Why make the announcement in the middle of the night?” asked Chidi Nwakuna, a businessman who showed up early to vote in the southern city of Port Harcourt.

Voting had been due to start nationwide at nearly 120,000 polling stations at 0700 GMT on Saturday, with a record 73 candidates on the ballot.

Just hours before the announcement, Boko Haram Islamists killed at least people in an attack on the northeastern city of Maiduguri.

Rumors began circulating late on Friday about a possible postponement after widespread reports of problems with the delivery of election materials, including ballot papers.

Members of the Independent National Electoral Commission (INEC) held emergency talks and after examining the logistics plans concluded the timetable was “no longer feasible”, its chairman, Mahmood Yakubu, said.

Presidential and parliamentary elections are now set for February 23, and governorship and state assembly elections have been pushed back to March 9, Yakubu said.

“This was a difficult decision for the commission to take but necessary for the successful delivery of elections and the consolidation of our democracy,” he added.

The two main political parties swiftly accused each other of orchestrating the delay as a way of manipulating the vote, a sentiment echoed by voters, some of whom had traveled long distances to vote in their hometowns.

“I see this postponement of the election as a… ploy to rig,” said Oyi Adamezie in Warri, in the southern state of Delta.

Nigeria has postponed voting before: in 2015, INEC announced a 6-week delay just one week before the election, citing security concerns linked to Boko Haram.

The 6-week delay was seen as a way for then president Goodluck Jonathan to claw back votes after a strong challenge from Buhari, an opposition candidate.

The same argument may be made again, with little to separate Buhari and Abubakar.

Yet even before the delay’s announcement, challenges were apparent in the vote’s organization.

In many areas suffering intermittent electricity supply and poor road infrastructure, thousands of INEC agents had been working into the night to deliver election materials.

“They had much time to prepare,” said Austin Onwusoanya, a civil servant in the largest city Lagos who was to manage a polling unit that now stood unused.

“There are other things going on.”

The postponement comes after an election campaign in which Buhari had sought to portray himself as a continuity candidate.

He came to power in 2015 on a promise to defeat Boko Haram Islamists, tackle rampant corruption and improve the country’s oil-dependent economy.

But the jihadists still mount attacks, and there is widening insecurity elsewhere, while slow growth as the economy limps back from recession has hit Buhari’s stock.

So, too, has the perception he has only targeted political opponents as part of his high-profile anti-corruption campaign.

Buhari’s purported shortcomings have been a feature of Abubakar’s campaign, who has billed himself as a modern, energetic and pro-business leader.

The former vice-president’s past has also featured prominently, as the ruling party resurrected controversies from his time in office and alleged links to corruption.

The election – the 6th in the 20 years since civilian rule was restored – is likely to be one of the last times men of Buhari and Abubakar’s generation will feature so prominently.

They have been fixtures on Nigeria’s turbulent political scene for decades and are the oldest on the ballot.

Just over half of the 84 million registered voters are aged 18-35, prompting calls for more representative candidates unburdened by involvement in Nigeria’s traumatic past. – Rappler.com