Feb 18, 2019 11:34 PM PHT
Agence France-Presse
Facebook Twitter Copy URL
Copied
At an emergency meeting of his ruling All Progressives Congress party in Abuja, Nigerian President Muhammadu Buhari says he intends to make sure the rescheduled ballot proceeds without a hitch 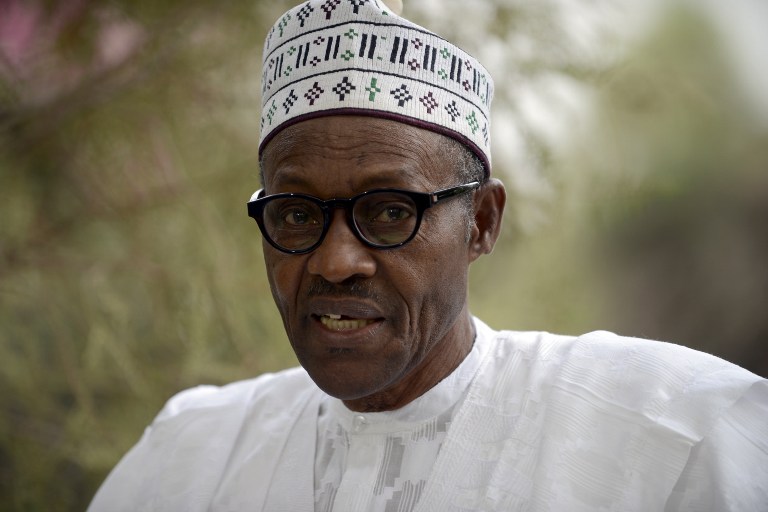 ABUJA, Nigeria – Nigerian President Muhammadu Buhari said Monday, February 18, he had ordered the police and military to be “ruthless” with vote-riggers, as preparations were made for rescheduled elections.

Presidential and parliamentary elections were put off just over 5 hours before polls were due to open on Saturday, February 16, causing widespread anger.

New polls have been rescheduled for this Saturday, February 23, while governorship and state assembly elections have been pushed back to March 9.

At an emergency meeting of his ruling All Progressives Congress party (APC) in Abuja, Buhari said he intended to make sure the rescheduled ballot proceeds without a hitch.

“I do not expect anybody to make any disturbance,” he told senior party members. “Anybody who decides to snatch (ballot) boxes or use thugs to disturb it (the vote), maybe this will be the last unlawful action he will take.”

Buhari, 76, said he had ordered “the military and the police to be ruthless” to ensure all Nigerians can vote for their chosen candidate.

“I am going to warn anybody who thinks he has enough influence in his locality to lead a body of thugs or snatch (ballot) boxes or to disturb the voting system, he will do it at the expense of his life,” the president emphasized.

Both the APC and the main opposition Peoples Democratic Party (PDP) have been accused of wanting to rig the result, notably by buying biometric voter identity cards.

The Independent National Electoral Commission (INEC) blamed the last-minute delay on logistical difficulties in the distribution of election materials, as well as sabotage.

Elections have been delayed before in Nigeria: In 2015, there was a 6-week postponement on security grounds linked to the Boko Haram conflict in northeast Nigeria.

In 2011, the election was halted after it had already begun due to problems with deliveries of ballot papers, results sheets, and other voting materials.

This year’s election is the sixth in the 20 years since Nigeria returned to civilian rule after decades of military government.

Some 84 million voters are registered.

Buhari’s aides retweeted the speech with the hashtag #SnatchAtYourOwnRisk, while one made an explicit reference to the president’s past as an army general.

In 2015, the newly elected head of state, who during the last election campaign said he was a “converted democrat,” made a point of saying he would no longer be referred to as “General Buhari.”

His latest comments came as the APC, PDP and international observers called for calm after the postponement and the PDP said it was a “direct call for jungle justice.”

“It is indeed a license to kill, which should not come from any leader of any civilized nation,” said party spokesman Kola Ologbondiyan.

Many Nigerians had returned to their home towns and villages to vote, prompting fears they may not return next weekend and turn-out will be low.

Buhari told APC delegates there was no justification for the delay and that questions needed to be answered about “why such incompetence manifested itself.”

INEC chairman Mahmood Yakubu has said the decision to postpone was the commission’s alone and rejected claims of any political interference.

APC chairman Adams Oshiomhole, however, backed a call from his opposite number at the PDP for Yakubu to resign, and accused INEC of “mischief, collusion and double-speak.”

There was a “strong suggestion” the election watchdog had colluded with “anti-democratic forces,” he said, accusing it of warning the PDP in advance about the delay.

PDP challenger Atiku Abubakar’s campaign team has accused the APC of working with INEC and the security services to rig the vote in its favor.

INEC officials across the country began reconfiguring the 180,000 electronic machines used to “read” voters cards to account for the new election date.

In the southern city of Port Harcourt, IT personnel were changing the date and other information on about 7,000 machines before Wednesday, February 20.

“We are working hard to meet the deadline,” said INEC spokesman Christian Nwokorie. “But the internet connection is a challenge…

“Usually it should take no more than one minute to complete this process but if the network is bad, it can take up to 5 minutes.”

Batteries on the machines also need to be charged but constant electricity is an issue, he said. INEC has provided generators as back-up, he added. – Rappler.com