Trump tells Venezuela military to back Guaido or ‘lose everything’ 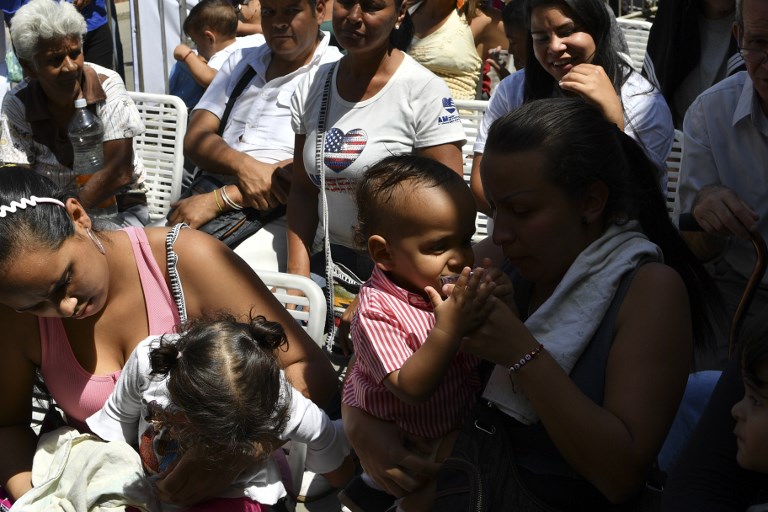 Bringing in humanitarian aid is crucial to the viability of Guaido, who has denounced Maduro’s re-election last year as fraudulent and in January declared himself interim president, a move recognized by some 50 countries.

He has given the Maduro government until Saturday, February 23, to let shipments of mainly US aid into the country, which is in the grip of a humanitarian crisis due to shortages of food and medicine exacerbated by hyperinflation.

Addressing supporters and Venezuelan expatriates in Miami, Trump said he had a message for officials helping keep Maduro in place.

“The eyes of the entire world are upon you today, every day and every day in the future.

“You cannot hide from the choice that now confronts you. You can choose to accept president Guaido’s generous offer of amnesty to live your life in peace with your families and your countrymen.

“Or you can choose the second path: continuing to support Maduro. If you choose this path, you will find no safe harbor, no easy exit and no way out. You will lose everything.”

Guaido has set a target of signing up to a million volunteers to help bring in the aid, with 600,000 already registered.

“On February 23, we have the opportunity to save the lives of hundreds of thousands of Venezuelans,” he said.

Maduro countered with his own announcement of 300 tonnes of aid from Russia, which he said would reach Venezuela by Wednesday, February 20 – 3 days ahead of a potential showdown brought about by his February 23 deadline.

Maduro has previously announced the arrival of aid from China, Cuba and Russia, his main international allies.

Earlier, opposition officials hit out at state internet provider CANTV for blocking the website where volunteers are signing up to help bring in the US aid stockpiled in Colombia just over the border from Venezuela.

A second aid collection center is due to begin operations in Brazil’s northeastern state of Roraima, which borders Venezuela. But there is much uncertainty over the aid in Brazil, with officials there saying they have no information at this point.

Military officials in Roraima said they had yet to receive orders, although a collection center could be set up quickly, with some businesses having already provided warehouses to that effect.

A third center is due to open this week on the Dutch island of Curacao, off Venezuela’s north coast.

The humanitarian aid standoff is due to come to a head this weekend, when caravans of buses are set to carry volunteers to border entry points to meet and transport arriving cargo.

It is unclear how Guaido will overcome the border barriers put up by the Venezuelan military, on Maduro’s orders.

Volunteer groups have begun meeting in “humanitarian camps” in several Venezuelan states to organize and prepare for the arrival of the aid to alleviate hardship from an imploding economy has driven an estimated 2.3 million Venezuelans to migrate from the oil-rich country.

Maduro, who denies the existence of a humanitarian crisis, dismisses the opposition moves as a “political show” and a cover for a US invasion.

“Whoever prevents the entry of humanitarian aid is condemned to spend the rest of their lives fleeing international justice, because that is an international crime,” US Senator Marco Rubio said as he toured the Colombian collection center in Cucuta on Sunday.

Three US military cargo planes delivered several dozen tons of food assistance to Cucuta on Saturday. Another US aircraft is due in Curacao from Miami on Tuesday.

Guaido has ordered the armed forces to let the aid pass, but they remain loyal to Maduro, who has instructed his army to prepare a “special deployment plan” for the 2,200-kilometer (1,370-mile) border with Colombia.

Maduro has dismissed the humanitarian assistance as “crumbs” and “rotten and contaminated food,” while blaming shortages of food and medicine on US sanctions.

The government also said Monday it will stage a concert on the Colombian border the same day Richard Branson has said he will hold one just over the frontier to push for aid to be allowed in. This will unfold on February 22-23.  – Rappler.com