Taiwan’s Tsai confirms she will seek reelection in 2020 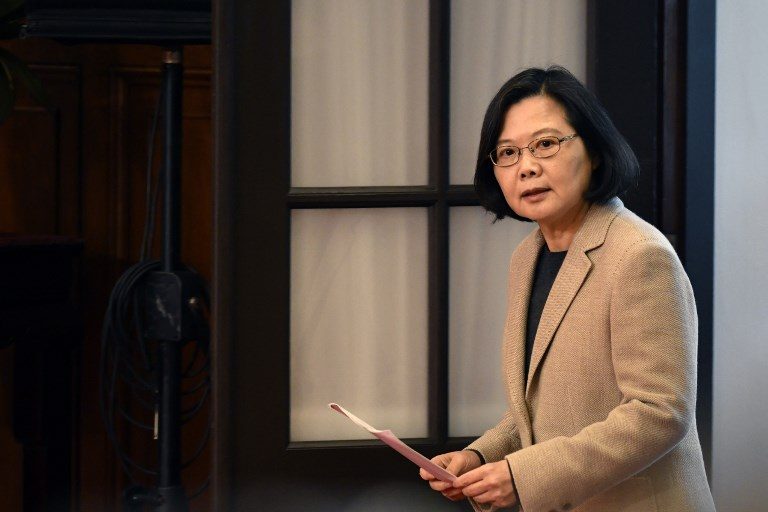 Facebook Twitter Copy URL
Copied
'It's natural that any sitting president wants to do more for the country and wants to finish things on his or her agenda,' Taiwan's President Tsai Ing-wen says

TAIPEI, Taiwan – Taiwan’s President Tsai Ing-wen has confirmed she will seek reelection next year despite falling ratings and an increasingly strained relationship with China.

Tsai, who was elected in 2016 as the island’s first female leader, told CNN she wanted to “complete” her vision for Taiwan in an interview on board her presidential jet, released Tuesday, February 19.

“It’s natural that any sitting president wants to do more for the country and wants to finish things on his or her agenda. And it’s quite natural for a president seeking another 4 years to complete his agenda or her agenda,” she said.

Tsai, 62, won a landslide victory two years ago to defeat the ruling Beijing-friendly Kuomintang (KMT) party which oversaw an unprecedented thaw in cross-strait ties but began to unnerve many voters with its perceived coziness to the mainland.

The result rattled Beijing because Tsai – who hails from the independence-leaning Democratic Progressive Party (DPP) – refuses to acknowledge that the self-ruled island is part of “one China.”

She reached out to the mainland’s leadership after her election to seek talks but was rebuffed. Instead, Beijing cut communication with her administration, stepped up military drills and poached several of Taiwan’s dwindling diplomatic allies.

Her popularity at home has waned considerably, primarily a backlash to domestic policies such as much needed public-sector pension reforms and a push for gay marriage rights that incensed and galvanized conservatives.

Her ratings fell as low as 15% after she stepped down as head of the DPP following a series of major defeats in November local elections.

Tsai said she is “confident” about her reelection prospects, despite calls from some senior DPP members asking her not to stand again in early 2020.

“This is something I have prepared for,” she told CNN.

Tsai blamed the election setback on what she called a “difficult reform agenda” pushed by her government, rather than the frosty cross-strait relations.

“You get attacks, you get criticism, the people don’t feel the result of the reform so much when you’ve just started,” she said.

The embattled leader’s popularity has rebounded somewhat after a bellicose New Year’s speech by Chinese leader Xi Jinping, describing Taiwan’s unification with the mainland as “inevitable.”

Tsai delivered her own riposte, saying Taiwan would never relinquish its hard won democratic freedoms, a response that led to a boost in her ratings.

Her main challengers will be from the opposition KMT, with several of its heavyweights already indicating their interest in running, including former New Taipei City mayor Eric Chu, who lost to Tsai in 2016. – Rappler.com