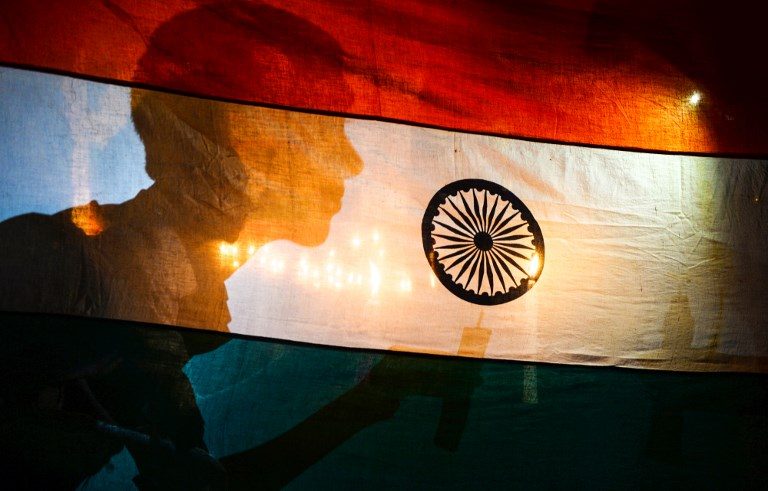 Facebook Twitter Copy URL
Copied
'The prime minister of Pakistan has offered to investigate the matter if India provides proof. This is a lame excuse,' says an Indian foreign ministry statement

Amid a new spike in tensions between the nuclear-armed neighbors, Khan earlier demanded that India give “actionable evidence” to back its claim of Pakistan’s backing for the suicide bomber.

While offering an investigation, Khan also said Pakistan would retaliate if attacked over the bombing, claimed by a Pakistan-based group, which killed at least 41 Indian paramilitaries.

“The prime minister of Pakistan has offered to investigate the matter if India provides proof. This is a lame excuse,” said an Indian foreign ministry statement.

“We demand Pakistan to stop misleading the international community and take credible and visible action against the perpetrators of Pulwama terrorist attack.”

Since the February 14 attack on the military convoy in the Pulwama district of Kashmir, Indian forces have launched widespread operations against Jaish-e-Mohammed (JeM), which claimed responsibility for the bombing.

Three JeM leaders, 4 Indian soldiers and a civilian were killed in a gun battle Monday, February 18, according to Indian officials. The Indian military has said the bombing was “masterminded” by Pakistan’s Inter-Services Intelligence branch.

Pakistan has denied any role in the attack and in a nationally televised address, Khan said that if his country was attacked “Pakistan won’t just think to retaliate. Pakistan will retaliate.”

Thousands have marched in Indian cities in recent days to pay homage to the dead and demanding a firm government response.

Khan said his Indian counterpart, Prime Minister Narendra Modi, would get a boost in a looming national election if New Delhi staged an attack on Pakistan.

It was “easy to start a war,” Khan said, while expressing hope that “better sense will prevail.”

Khan said that if any militant group was using Pakistani soil to launch attacks, “its enmity is with us. This is against our interest.”

Kashmir has been split between India and Pakistan since independence from Britain in 1947 and has been a constant source of trouble since. Both countries claim the former Himalayan kingdom in full and have fought two wars over it.

Tens of thousands of people, mainly civilians, have died since an armed uprising erupted in 1989.

India has long accused Pakistan of harboring militants who launch attacks on its soil, including banned groups such as JeM and Lashkar-e-Taiba, blamed for carrying out the 2008 Mumbai attacks which left scores dead.

Pakistan was also accused by Iran last week of sheltering the perpetrators of an attack which killed 27 Revolutionary Guards, while Kabul and Washington have long claimed that Islamabad offers safe haven to the Afghan Taliban.

“The United Nations must step in to defuse tensions,” wrote Qureshi in a message shared with journalists.

On Monday Saudi Arabia vowed to “de-escalate” the situation during a high-profile state visit by Crown Prince Mohammed bin Salman to Islamabad. He was to arrive in India late Tuesday.

Pakistan’s ambassador to Afghanistan warned that any Indian action against its neighbor could disrupt peace talks with the Taliban.

Pakistan is “playing a very important role” in the months-long push led by the US for talks between the Taliban and the Afghan government, said Zahid Nasrullah. – Rappler.com