Feb 20, 2019 12:37 PM PHT
Agence France-Presse
Facebook Twitter Copy URL
Copied
(UPDATED) Prime Minister Theresa May suffers a fresh blow to her authority at home when 3 of her MPs resign from her Conservative party in protest at her Brexit strategy 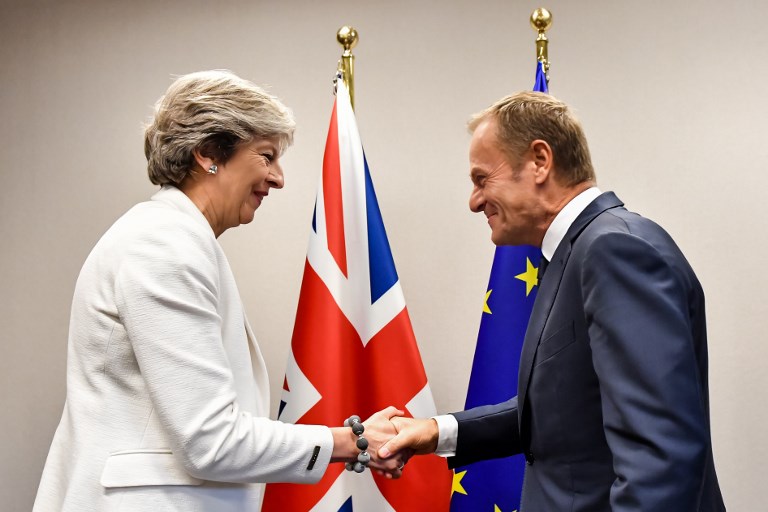 BRUSSELS, Belgium (UPDATED) – Prime Minister Theresa May heads back to Brussels on Wednesday, February 20, to renew her quest to reopen the terms of Britain’s Brexit divorce, but appears headed for disappointment.

With less than 6 weeks until Brexit day, European Commission president Jean-Claude Juncker has agreed to meet May once again, but EU leaders insist they will not restart negotiations.

“I have great respect for Theresa May, for her courage and her assertiveness. We will have a friendly talk tomorrow but I don’t expect a breakthrough,” Juncker said Tuesday, February 19.

Just hours before the meeting, Britain’s Foreign Minister Jeremy Hunt warned that progress on the thorny problem of the Irish border is the “only way” to avoid Britain crashing out without a deal on March 29.

And May suffered a fresh blow to her authority at home when 3 of her MPs resigned from her Conservative party in protest at her Brexit strategy to join a new independent group of lawmakers.

May and the other 27 EU leaders approved a Brexit withdrawal agreement at a summit on November 25 last year, but the British leader’s own parliament rejected it overwhelmingly on January 15.

Since then, May and her ministers have repeatedly met EU leaders and their negotiator Michel Barnier to urge them to reopen the text to find a way to appease euroskeptic MPs.

May will try again on Wednesday, but on this trip she will not even meet Donald Tusk who, as president of the European Council, represents the leaders of EU member states.

She will instead meet Juncker and Barnier, who have no mandate from Tusk’s council or EU capitals to renegotiate the deal, or to modify the “Irish backstop” clause.

This provides for Britain to remain in the EU customs union until a way is found – such as a future free trade deal – to ensure that Ireland’s border with Northern Ireland remains open.

Brexiteers in May’s own Conservative party see this as a “trap” to keep Britain tied to the bloc indefinitely, and have demanded a time limit or exit clause.

This would be seen in Brussels as a betrayal of EU member Ireland, and it has consistently got short shrift from EU officials.

This represents a direct rejection of May’s core demand.

With the changes, “the prime minister believes… there is a majority in parliament for a deal.”

Without a deal, Britain is due to leave the Union abruptly after 4 decades on March 29, with no follow-on agreement or transition period to manage trade and economic relations.

A European source said Britain’s Attorney General Geoffrey Cox, whose legal analysis of May’s deal confirmed Brexiteer fears, will have a have a key role to play.

If Brussels does enough on the backstop to persuade Cox to soften his advice, it could help swing the parliamentary arithmetic behind the prime minister.

Both sides have said they want to avoid no deal Brexit, and many experts foresee economic chaos, even warning of food and medicine shortages or a renewed threat of unrest in Northern Ireland.

Manufacturing supply chains could be disrupted, and Brexit uncertainty has already been cited as a contributing factor in the closure or departure of several British-based businesses.

On the EU side, the commission on Wednesday published an update on its no-deal planning, with 7 out of 19 legal proposals to mitigate the effects now approved.

Another option would be for Brussels to accord Britain an extension to the March 29 deadline, although May insists she will not request a delay.

A delay could keep Britain inside the EU for May 23-26 elections for a new European Parliament, which will start sitting from July 2, presumably without any British members.

May is due at the EU’s headquarters for her meeting with Juncker at 6:30 pm (1730 GMT). The next day, British opposition Labour leader Jeremy Corbyn will meet Barnier. – Rappler.com