Gossip scandal erupts in Vatican ahead of pope’s exit 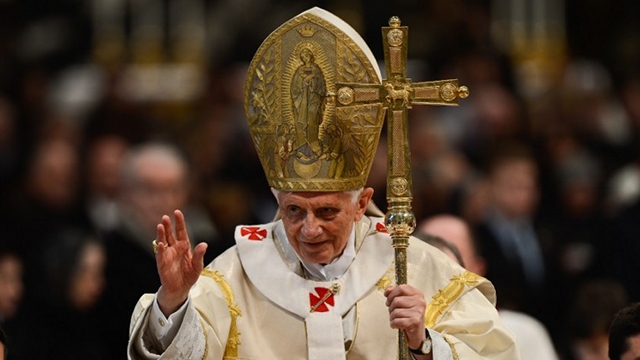 VATICAN CITY, Italy – With just days to go before Pope Benedict XVI’s resignation, the Vatican is battling persistent rumors that his decision was triggered by an explosive report on intrigue in its corridors of power.

The secret report compiled by a committee of 3 cardinals for the pope’s eyes only was the result of a wide-ranging investigation into leaks of confidential papers from the Vatican that caused huge embarrassment last year.

The cardinals questioned dozens of Vatican officials and presented the pope with their final report in December 2012, just before Benedict pardoned his former butler Paolo Gabriele who had been convicted of leaking the papal memos.

The Panorama news weekly and the Repubblica daily said on Thursday the report contained allegations of corruption and of blackmail attempts against gay Vatican clergymen, as well as favoritism based on gay relationships.

Both publications quoted a source with knowledge of the investigation saying that the cardinals’ conclusions “revolve around the sixth and seventh commandments” — “Thou shall not commit adultery” and “Thou shall not steal”.

The Vatican has declined to comment on these two reports, with spokesman Federico Lombardi saying they were “conjectures, fictions and opinions.”

The run-up to papal conclaves to elect a new pope is often accompanied by rumors and gossip in Italian media, as rival factions battle for influence.

But there was a twist on Friday, February 22, when Pope Benedict XVI replaced Monsignor Ettore Balestrero, a powerful behind-the-scenes figure in the Secretariat of State with a major role in handling the Vatican bank’s foreign relations.

He is being sent as Vatican envoy to Colombia — a serious demotion.

Balestrero has been a key figure in Vatican efforts to overhaul its scandal-tainted bank to comply with international anti-money laundering laws.

A Vatican expert at Italian daily La Stampa said the pope would likely meet with the three retired cardinals who authored the report before resigning.

The report could also be discussed during a series of meetings for cardinals beginning next Friday, a day after the pope steps down, where priorities for the Catholic Church will be debated.

The “Vatileaks” scandal first exploded in January last year when Italian media published a series of letters to the pope in which Carlo Maria Vigano, the head of the Vatican City’s government denounced corruption and waste.

The following leaks pointed to divisions in the Vatican hierarchy including efforts to unseat Secretary of State Tarcisio Bertone, a divisive figure.

On May 23, Gabriele was arrested and his house inside the Vatican walls was raided by special gendarmes who found hundreds of sensitive documents.

A day later, the head of the Vatican bank, Ettore Gotti Tedeschi, was sacked, accused of mismanagement and indiscretions linked to the leaks.

Gabriele was convicted after a week-long trial in the Vatican in October.

The pope asked cardinals to investigate last year, giving them free rein to interview anyone of the 2,843 people working in the Roman Curia and 2,001 people working for the governorate, the administration of the Vatican City.

The committee was also allowed to collect testimony from cardinals. – Rappler.com