Feb 21, 2019 12:41 PM PHT
Agence France-Presse
Facebook Twitter Copy URL
Copied
(UPDATED) Venezuelan opposition leader Juan Guaido sets out in a convoy of vehicles to personally pick up US aid being stockpiled on the other side of the Colombian border, defying Maduro's military to stop him 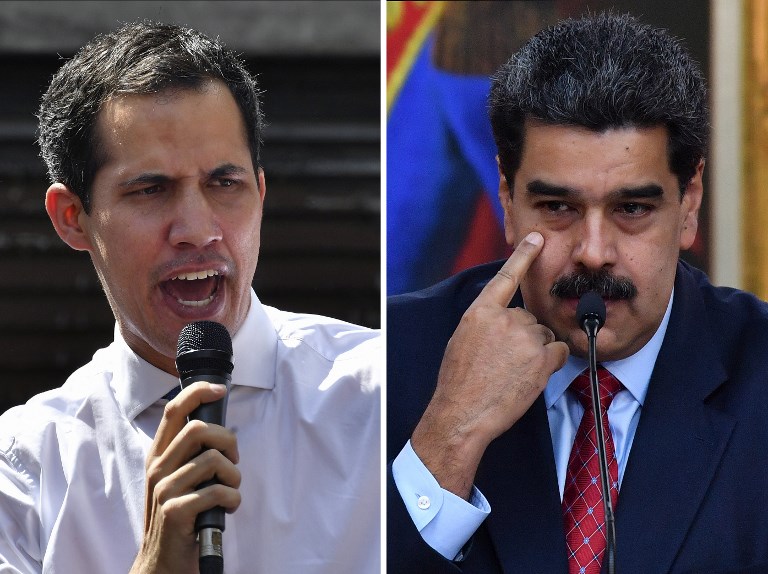 CARACAS, Venezuela (UPDATED) – President Nicolas Maduro ordered the closure of Venezuela’s border with Brazil on Thursday, February 21, in an increasingly fraught power struggle with Juan Guaido, the opposition leader spearheading efforts to bring humanitarian aid into the country despite a military blockade.

Guaido set out in a convoy of vehicles to personally pick up US aid being stockpiled on the other side of the Colombian border, defying Maduro’s military to stop him.

Recognized as interim president by more than 50 countries, he left the capital Caracas for the Colombian border in a convoy of several vehicles for the 900-kilometer (560-mile) trip.

Embattled Maduro has dismissed Guaido’s humanitarian caravan as a “cheap show” and slammed aid as a precursor for a US military intervention in the oil-rich but crippled Latin American country.

The 35-year-old leader of the Venezuelan legislature proclaimed himself acting president January 23 and wants to oust Maduro, set up a transitional government and hold new elections.

A separate caravan of buses and trucks containing opposition lawmakers had earlier left eastern Caracas bound for the border.

Several of the trucks were stopped by security forces and their drivers forced to get out, but the rest of the caravan was allowed to continue, lawmakers said.

“We know that the regime is going to put all obstacles to prevent us from reaching the border, but nothing is stopping us, we are going to continue,” said opposition lawmaker Yanet Fermin.

Signaling his growing disquiet, Maduro announced Thursday that the border with Brazil – which along with Colombia is one of the main potential avenues for aid delivery – would be “completely and absolutely” closed from 8:00 pm (0000 GMT) until further notice.

She said 100 tons of food, medicines and emergency kits were waiting to be trucked from Boa Vista to Pacaraima on the Venezuelan border.

Maduro also warned Thursday he was considering “a total closure of the border with Colombia” to Venezuela’s west.

He has already ordered the military to barricade a major border bridge to prevent supplies from entering the country from Cucuta, Colombia, where tons of humanitarian aid are being stockpiled, most of it from the United States.

The military announced a ban on vessels putting to sea from Venezuelan ports until Sunday, February 24, to avoid actions by “criminal” groups.

Meanwhile, Maduro – mirroring Guaido’s move in an attempt to show his socialist government was able to look after its people – ordered a shipment of thousands of food boxes to be distributed to the needy along the Colombian border.

Shipments of food and medicine for the crisis-stricken population have become a key focus of the power struggle between Maduro and Guaido.

Guaido, who says 300,000 people could die without an influx of aid, says he aims to rally a million volunteers to start bringing it in by Saturday, February 23.

It remained unclear how he proposed to do so if the blockade continues, but experts have pointed to the notoriously porous 2,200 kilometer (1,360-mile) border, which is perforated by well-worn drug trafficking and contraband routes.

Guaido said the planned entry points for aid were the Brazilian and Colombian borders, the island of Curacao and the seaports of Puerto Cabello and La Guaira.

Venezuela’s vice-president Delcy Rodriguez said the government was shutting down air and sea links between Curacao and Venezuela.

However Carlos Faria, one of the leaders of a group of Venezuelans organizing aid shipments via Curacao, told AFP a plane carrying 50 tons of food and medicine was expected from Miami on Thursday and would be loaded onto a Venezuela-bound ship on Friday, February 22.

Meanwhile, the White House said US Vice-President Mike Pence would visit neighboring Colombia on Monday in a show of support for Guaido.

Underlining the swell of international support for Guaido, British entrepreneur Richard Branson plans to hold a pro-aid concert just inside Colombia on Friday, while Maduro’s government stages a rival concert on its side of the border, around 1,000 feet (300 meters) away.

“All the artists that are going to sing in Colombia should know that they are committing a crime, they are endorsing a military intervention,” Maduro said. – Rappler.com