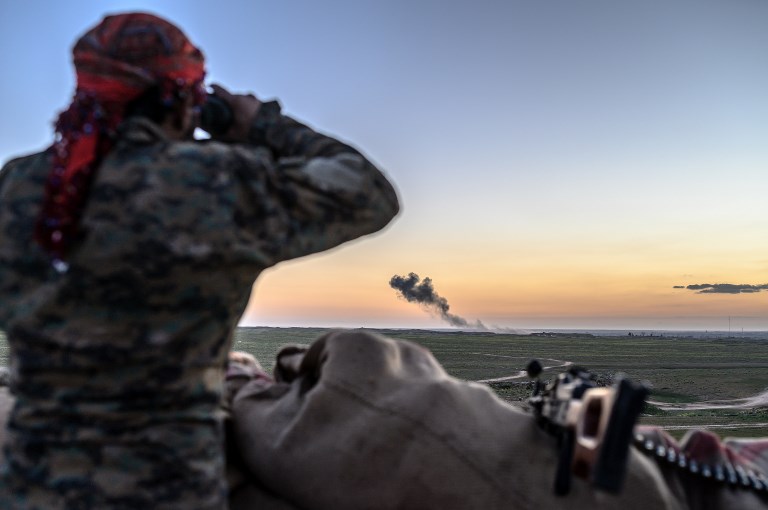 NEAR BAGHOUZ, Syria (UPDATED) – US-backed Syrian forces tried Thursday, February 21, to negotiate the release of civilians still trapped in the Islamic State group’s (IS, formerly known as ISIS or the Islamic State in Syria and Iraq) last redoubt, as the international coalition warned the jihadists faced “inevitable defeat.”

With scores of ISIS families and their children having fled the collapsing “caliphate” in past months, Western nations have been left facing a dilemma over how to handle their citizens now wishing to return home.

Hundreds of people including women and children were trucked out of the last patch of ISIS territory on Wednesday, February 20, but the Syrian Democratic Forces (SDF) said that a large number of civilians remained inside.

The evacuations were seen as a sign the SDF would soon retake the last scrap of the “caliphate” the jihadists proclaimed across swathes of Syria and Iraq in 2014, whether through an assault or a surrender deal.

The Kurdish-led SDF, backed by the warplanes of the US-led coalition, have trapped the jihadists in less than half a square kilometer (a fifth of a square mile) in the village of Baghouz.

“Coalition forces, to include the US, continue to support the SDF as they negotiate having innocent civilians released and their fighters returned with the inevitable defeat in Baghouz,” coalition spokesman Sean Ryan told Agence France-Presse (AFP).

There was no immediate comment from the SDF, which has previously identified the remaining civilians as mostly wives and children of ISIS fighters.

Paul Bradley, from the Free Burma Rangers volunteer group, said people who had fled the ISIS enclave painted a grim picture of life inside.

“They said the food situation was very bad,” he said.

“They showed us this bread that’s basically mashed up wheat with water burnt on both sides, $16 a kilo,” he said.

AFP correspondents on Wednesday saw at least 17 trucks carrying men, women and children out of the last patch of ISIS territory.

SDF spokesman Adnan Afrin said most of them were civilians, but they also included ISIS fighters.

“Civilians and fighters from many nationalities have surrendered,” he said, without naming specific countries.

“There are still large groups of civilians inside, as well as ISIS fighters.”

The Syrian Observatory for Human Rights, a Britain-based war monitor, said Wednesday that negotiations were being held “for the surrender of the last ISIS fighters.”

It said there were “reports of a deal” but the details were unclear.

At the height of its rule, ISIS imposed its brutal interpretation of Islamic law on a territory roughly the size of the Britain.

But the jihadists have since lost almost all their territory, and hundreds of foreigners suspected of being ISIS fighters, as well as related women and children, are being held by the SDF.

Since early December, nearly 40,000 people have fled into SDF-held territory, according to the Observatory, which relies on a network of sources in Syria.

Men suspected of belonging to ISIS are transferred to detention centers. Civilians, including wives and children of jihadists, are sent to camps for the displaced in northeastern Syria.

Security officials in Iraq said the SDF handed over 130 Iraqi jihadists to Iraq on Thursday, but SDF spokesman Mustefa Bali denied the claim.

Syria’s Kurds have long demanded the repatriation of the foreigners in their custody, but outside governments have proved reluctant.

US President Donald Trump said Wednesday he was barring a US-born former ISIS propagandist from returning home from Syria, where the conflict has killed more than 360,000 people and displaced millions since 2011.

Trump said on Twitter he has “instructed” Secretary of State Mike Pompeo “not to allow Hoda Muthana back into the country.”

It came after a lawyer for the family of a teenager who fled London to join the jihadists when she was just 15 said Britain was revoking her citizenship.

Shamima Begum, 19, is being held in a refugee camp in northeast Syria, and at the weekend gave birth to her third child. Two previous children died at an early age.

Save the Children said more than 2,500 foreign children from 30 countries who have fled the dregs of the “caliphate” are living in desperate conditions in camps in northeastern Syria.

The charity urged their countries of origin to act “to ensure the safety of their citizens.”

“They need specialized help to recover from their experiences and return to normality, together with their families,” the charity said.

“The international community must act now before it is too late.” – Rappler.com