Feb 22, 2019 3:09 PM PHT
Agence France-Presse
Facebook Twitter Copy URL
Copied
The spectacle will play out on opposite ends of a 300-meter bridge connecting Venezuela with Colombia to the west 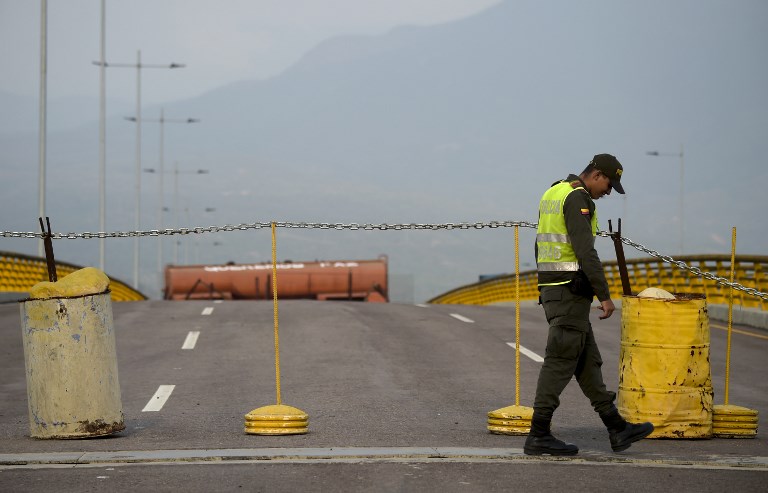 CARACAS, Venezuela – Venezuela’s political tug-of-war morphs into a battle of the bands on Friday, February 22, with dueling government and pro-opposition pop concerts ahead of a weekend showdown over the entry of badly needed food and medical aid.

The spectacle will play out on opposite ends of a 300-meter bridge connecting Venezuela with Colombia to the west. That span, called the Tienditas bridge, is one of the conduits that opposition leader and self-declared interim president Juan Guaido wants to use to bring in humanitarian assistance to his economically crippled country.

The bridge is now blocked with freight containers left there by the military, with President Nicolas Maduro refusing to let aid in and arguing it would be the first step toward a foreign invasion.

The stated goal is to raise $100 million in donations. Big stars from the Spanish-speaking world are scheduled to perform, and the presidents of Colombia, Chile and Paraguay have said they will attend.

The government has not said who will perform on the Venezuela end of the bridge. That concert’s slogan is “Hands Off Venezuela.”

“All the artists that are going to sing in Colombia must know that they are committing a crime. They are endorsing a military intervention,” said Maduro. On Thursday he ordered the closure of Venezuela’s border with Brazil – one of the main potential avenues for aid delivery – as part of the power struggle with Guaido over bringing in aid.

Maduro said he was considering closing the border with Colombia, too.

Guaido meanwhile was traveling in a convoy of vehicles to personally pick up US aid being stockpiled on the Colombian border, defying Maduro’s military to stop him.

Recognized as interim president by more than 50 countries, he left the capital Caracas in a convoy of vehicles with tinted windows for the 900-kilometer (560-mile) trip.

The 35-year-old leader of the Venezuelan legislature proclaimed himself acting president January 23 and wants to oust Maduro, set up a transitional government and hold new elections.

Guaido scored important symbolic boosts Thursday as 11 Venezuelan diplomats based in the US declared their support for him.

Maria Teresa Belandria, Guaido’s designated ambassador in Brazil, said 100 tons of food, medicine and emergency kits were waiting to be trucked from Boa Vista to Pacaraima on the Venezuelan border.

Meanwhile, Maduro – mirroring Guaido’s move in an attempt to show his socialist government was able to look after its people – ordered a shipment of thousands of food boxes to be distributed to the needy along the Colombian border.

He also announced on Thursday the arrival of another 7.5 tons of medicine and medical supplies from Russia.

Shipments of food and medicine for the crisis-stricken population have become a key focus of the power struggle between Maduro and Guaido.

Guaido, who says 300,000 people could die without an influx of aid, says he aims to rally a million volunteers to start bringing it in by Saturday.

It remained unclear how he proposed to do so if the blockade continues, but experts have pointed to the notoriously porous 2,200 kilometer (1,360-mile) border, which is perforated by well-worn drug trafficking and contraband routes.

Guaido said the planned entry points for aid were the Brazilian and Colombian borders, the island of Curacao and the seaports of Puerto Cabello and La Guaira.

The opposition says teams of volunteers will spread out to bring aid in through states bordering Colombia and Brazil and from the city of Falcon in the north which looks out to Curazao. Colombian police say there are some 30 clandestine border crossings into Venezuela.

Venezuela’s vice-president Delcy Rodriguez said the government was shutting down air and sea links between Curacao and Venezuela.

The White House said Vice-President Mike Pence would visit neighboring Colombia on Monday in a show of support for Guaido.

The US has repeatedly said “all options,” including military, are on the table.

But Brazilian Vice President Hamilton Mourao dismissed US threats of military intervention in Venezuela as “premature” and said it “wouldn’t make sense.”

“I think they’re more in the realm of rhetoric than action,” Mourao said of the threats in an interview with AFP. – Rappler.com