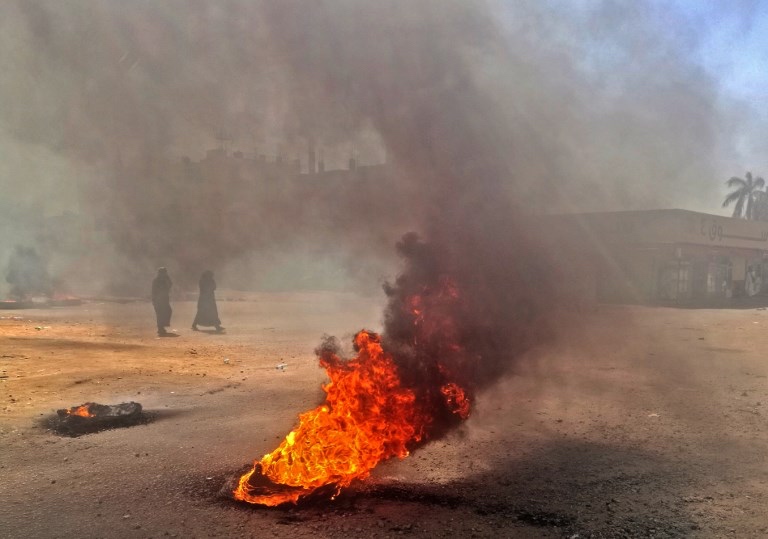 KHARTOUM, Sudan – Sudanese President Omar al-Bashir declared a nationwide state of emergency on Friday, February 22 and dissolved the government in an effort to quell weeks of demonstrations that have rocked his iron-fisted rule.

Deadly protests have broken out across the east African country since the government tripled the price of bread on December 19, with demonstrators accusing the government of mismanaging the nation’s economy and calling on the veteran leader to step down.

“I announce imposing a state of emergency across the country for one year,” Bashir said in a televised address to the nation from the presidential palace in Khartoum.

“I announce dissolving the government at the federal level and at the provincial levels,” he added.

Protest organizers vowed to press on with their demonstrations until Bashir steps down.

“We are calling on our people to continue with demonstrations until the main aim of this uprising, which is the stepping down of the regime chief, is achieved,” said the Sudanese Professionals Association which is spearheading the campaign, just after Bashir announced a state of emergency.

Late on Friday, crowds of protesters took to the streets in Omdurman, the twin city of Khartoum, but were quickly confronted with tear gas by riot police, witnesses said.

Hours after he made his announcements, Bashir issued two presidential decrees appointing 16 army officers and two security officers as new governors for the country’s 18 provinces.

He also announced that 5 members of the outgoing cabinet, including ministers for foreign affairs, defense and justice, would retain their portfolios.

Bashir has remained defiant in the face of demonstrations, dismissing protesters’ calls for him to step down after 3 decades in power.

Demonstrations first erupted in the farming town of Atbara but the rallies swiftly mushroomed into a major challenge to Bashir’s rule.

Officials say 31 people have died in the violence while Human Rights Watch says at least 51 people have been killed including medics and children.

Bashir, 75, swept to power in an Islamist-backed coup in 1989 that overthrew the elected government of then premier Sadiq al-Mahdi.

It is not the first time Bashir has imposed a nationwide emergency. He did so in December 1999 when a political crisis erupted after he broke away with his then mentor Islamist Hassan al-Turabi.

On Friday, he said he had asked to postpone meetings of a parliamentary panel that was set up to look into amending the country’s constitution to allow a 3rd presidential term. He did not elaborate.

Bashir is considering running for a 3rd term after he was chosen as a candidate by his ruling National Congress Party for the election due next year.

Sudan’s financial woes were long a cause of popular frustration before the anger spilt onto the streets after the bread price hike.

Soaring inflation along with acute foreign currency shortages have battered the economy, especially after the independence of South Sudan in 2011 took away the bulk of oil earnings.

“Our country is suffering from a difficult and complicated situation, the most difficult in its history,” said Bashir, dressed in a turban and traditional Sudanese robe, in front of a group of advisers and outgoing ministers.

“The economic issue needs to be tackled by qualified people and for this I will form a government made of people of quality,” he said.

The protest campaign has emerged as the biggest challenge the veteran leader has faced.

From the provinces to the streets of the capital, the demonstrations have spread through villages, towns and cities across the country.

They have drawn in a cross section of society including middle-class professionals, agricultural laborers, youths and Bashir’s political opponents – with thousands of women and men rallying across the country on some days.

Only the 3 conflict zones of Darfur, Blue Nile, and South Kordofan have remained largely untouched.

Bashir is wanted by the International Criminal Court to face charges of war crimes and genocide arising out of the long-running conflict in Darfur. He denies the charges.

Protest organizers have called on political groups to join their movement by signing a “Document for Freedom and Change.”

The text outlines a post-Bashir plan including rebuilding Sudan’s justice system and halting the country’s dire economic decline, the key reason for the nationwide demonstrations.

Bashir has countered the anti-government demonstrations with his own rallies, promising economic development and promoting peace. – Rappler.com