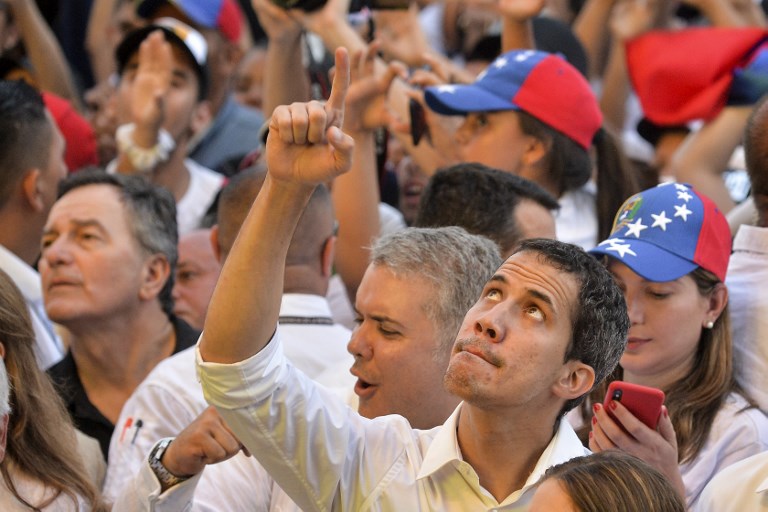 CÚCUTA, Colombia – Venezuela’s opposition leader Juan Guaido claimed the military helped him defy a travel ban by the government of President Nicolas Maduro as he joined thousands over the Colombian border on Friday, February 22, for a charity concert to push for humanitarian aid deliveries.

Maduro is trying to prevent food and medicines, from entering the country as tensions over access to the supplies turned deadly, prompting an angry condemnation from the United States.

Humanitarian aid has become a key focus of the power struggle between Maduro and Guaido, who has been recognized as interim leader by more than 50 countries.

Guaido delivered a blow to Maduro as he turned up unexpectedly at the concert in the Colombian border town of Cucuta, claiming “the armed forces participated in this process” to help him flout his travel ban.

Hours later, Caracas said it had sealed the Colombian border across the whole of Tachira – the western state that borders Cucuta – citing threats to Venezuela’s security.

“Due to the serious and illegal threats attempted by the Government of Colombia against peace and sovereignty in Venezuela, (the Venezuelan government) has taken the decision of a total, temporary closure of all bridges that unite both countries in Tachira,” Vice President Delcy Rodriguez wrote on Twitter.

The powerful military’s backing is crucial to the viability of the socialist leader, with defections strengthening Guaido’s hand.

The 35-year-old leader of Venezuela’s National Assembly declared himself interim president last month and is calling for fresh polls, branding Maduro a “usurper” and accusing him of rigging his re-election last May.

The tense standoff over aid claimed its first casualties Friday as two indigenous people were killed trying to prevent troops from sealing unofficial pathways across the Brazilian border.

“An indigenous woman and her husband were killed and at least 15 other members of the Pemon indigenous community were injured,” said a local human rights group, Kape Kape.

The violence occurred in southeastern Bolivar state close to the border with Brazil, which Maduro ordered closed on Thursday.

“People were in their community, calm. The soldiers came and started shooting at the indigenous people,” said Salomon Perez, who accompanied a brother and two nieces suffering from gunshot wounds by ambulance to a hospital in Brazil.

“The United States strongly condemns the Venezuelan military’s use of force against unarmed civilians and innocent volunteers on Venezuela’s border with Brazil,” the White House said in a statement, adding: “The world is watching.”

A rival pro-Maduro concert was taking place a few hundred yards away on the Venezuelan side of the border in Urena.

Guaido has set a Saturday deadline for the entry of humanitarian aid, saying as many as 300,000 Venezuelans are in dire need of food and medicines after years of shortages and malnutrition.

Some 2.7 million people have fled Venezuela since 2015 amid a devastating political and economic crisis, according to UN figures released Friday.

Maduro, who retains the support of allies China and Russia, has blocked the entry of aid and accused the United States of plotting a military intervention.

US special representative Elliott Abrams kept up the foreign pressure on Maduro on Friday, joining a Cucuta-bound plane carrying medical supplies and food.

Moscow has blasted Washington for using aid as a “convenient pretext for conducting military action.”

Hundreds chanted “freedom” and “the government is going to fall” while they waited for the Cucuta concert to begin on Friday under a hot sun, with the barricaded border crossing visible nearby.

“The concert is an immense help because this type of initiative was necessary to open our eyes and pressure the Venezuelan government,” said Wendy Villamizar, a 32-year-old Venezuelan woman wearing a cap with her country’s yellow, blue and red tricolor.

Performers took to the stage against a giant backdrop emblazoned with the words “#Trump Hands off Venezuela,” with around 2,500 people in attendance.