Nigeria votes for a new president after delay 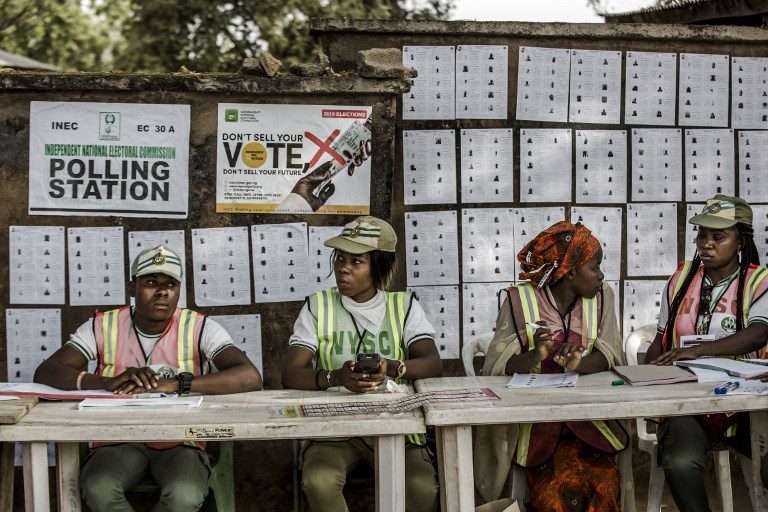 Facebook Twitter Copy URL
Copied
Results are expected from early next week, with the winner gaining control of Africa's most populous nation and leading oil producer for 4 years

DAURA, Nigeria – Nigerians voted for a new president on Saturday, February 23, after a week-long delay that has raised political tempers, sparked conspiracy claims and stoked fears of violence.

Some 120,000 polling stations opened from 0700 GMT, although there were delays in the delivery of some materials and deployment of staff.

Results are expected from early next week, with the winner gaining control of Africa’s most populous nation and leading oil producer for 4 years.

President Muhammadu Buhari was one of the first to vote, and emerged from the polling booth in his home town of Daura, in the northwest state of Katsina, to say he was confident of victory.

“So far, so good,” he told reporters. “I will congratulate myself. I’m going to be the winner.”

His main challenger, Atiku Abubakar, 72, said he was impressed by the turn-out after voting in Yola, in the northeastern state of Adamawa

Asked if he would accept the result, he said only: “I’m a democrat.”

Shortly before polls opened, one soldier was killed and 20 others injured as Boko Haram fighters tried to infiltrate the northeastern city of Maiduguri.

Security sources and residents said multiple explosions were heard as the Islamist militants peppered the city with mortar fire but were repelled.

There were also reported attacks in Auno, 25 kilometers (15 miles) west of the city, and in Geidam, in neighboring Yobe state.

The Independent National Electoral Commission (INEC) last Saturday, February 16 announced a one-week delay to the election, just hours before it was due to get under way.

That angered voters who had already traveled to their hometowns and villages to participate, and saw the main parties accuse each other of conspiring with the INEC to rig the result.

Neither has produced evidence and the elections watchdog has worked round the clock to overcome difficulties in delivering materials, which it had blamed for the postponement.

Many voters turned out before dawn to wait for polling stations to open, although delays were reported in major urban centers, including Abuja, Lagos, Port Harcourt and Kaduna.

In Port Harcourt, police and residents said “hoodlums” working for politicians tried to scare voters away from opposition strongholds by throwing dynamite.

“We’re used to this kind of thing,” said one man, Godspower Ekaete.

INEC’s logistical fine-tuning has been overshadowed by comments from Buhari that he had ordered security forces to be “ruthless” with vote-riggers and ballot-box snatchers.

Critics said his warning was a “license to kill” to the police and the military, while Abubakar said his comments did not befit an elected head of state.

Buhari has since sought to reassure voters not to be afraid, promising an “atmosphere of openness and peace, devoid of fear from threat or intimidation”.

Analysts SBM Intelligence say 233 people were killed in 67 incidents of election-related violence from last October to Friday – an average of two people per day.

The election campaign came against a backdrop of wider violence from Boko Haram and criminal gangs in the north that have killed more than 200 people this month alone.

That could affect participation in some affected areas and combine with voter apathy from last weekend’s postponement to affect turnout, according to analysts.

Just over 84 million people were registered to vote but only 72.7 million (86 percent) of those will be allowed to cast ballots, as they have picked up their voter identity cards.

Parliamentary elections are also being held.

Buhari has again vowed to be tough on insecurity and corruption, and wants to complete much-needed road and rail infrastructure projects, as well as social mobility schemes.

Abubakar is a pro-business free marketeer whose main pledges have been to privatize giant state-run companies and float the embattled naira currency.

Nigerian elections have previously been characterized by voting along ethnic and religious lines.

But with Buhari and Abubakar both northern Muslims, that could split the northern vote, making southern states a key battleground.

Opponents have accused Buhari of trying to manipulate the judiciary that would rule on any dispute about the results, after he suspended the chief justice this month.

Nigeria’s Business Day newspaper on Friday said whoever wins has to repair a “broken economy” limping back from recession, and hit by high unemployment, inflation and weak growth.

Some 87 million Nigerians live in extreme poverty, with the gulf between haves and have-nots widening. – Rappler.com