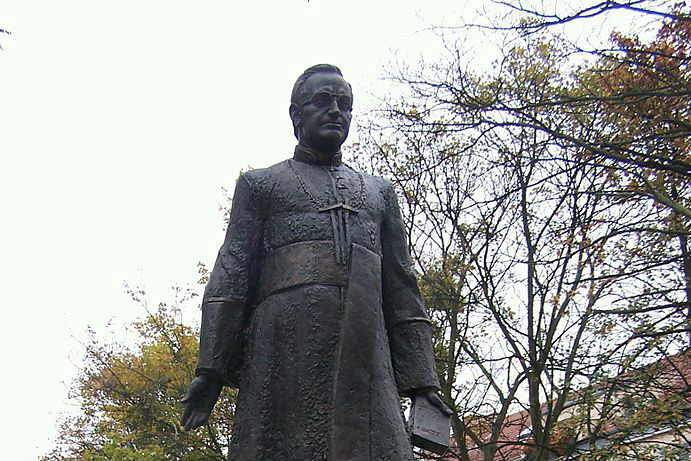 WARSAW, Poland – The toppled statue of a Polish priest accused of sex abuse has been restored to its plinth in the port of Gdansk, union sources said Saturday, February 23.

Polish authorities had charged 3 activists who overturned the statue of Father Henryk Jankowski, who died in 2010 and faced long-standing accusations of pedophilia.

Video footage on social media showed the men using a rope early Thursday, February 21 to overturn the statue. They then draped it with underwear and altar boy clothing.

A spokeswoman for the regional prosecutor’s office said they had been charged with “disrespecting a statue and damaging it”.

The alleged offense came just hours before the opening of a landmark summit in the Vatican on fighting child abuse within the Catholic Church.

Fresh claims of abuse against Jankowski emerged in December when liberal daily Gazeta Wyborcza published an article reviving allegations that had first surfaced years ago.

Guzikiewicz protested the defacing of the statue of the union’s former chaplain.

“So long as matters have not been legally proven, the monument must remain in its place,” he insisted, adding Jankowski’s sisters were taking legal action against the Gazeta’s report into his alleged activities.

An investigation into allegations of acts of pedophilia by Jankowski against young boys and girls was opened but shelved in 2004.

Guzikiewicz said the allegations against the priest were part of “this struggle against the Church and the bishops launched by leftist circles.”

Jankowski was formerly a close aide to Lech Walesa during the Gdansk shipyard strikes in 1980 headed by the anti-communist Solidarity movement, which led to the creation of Poland’s first union outside government control.

The 3 men arrested over the statue toppling face up to 5 years in prison.

They say their aim was to “destroy the false and hateful myth of Henryk Jankowski,” whose church was a haven for regime opponents under communist rule.

After the fall of communism his reputation was tarnished amid claims by some former associates that he was a nationalist with anti-European and anti-Semitic tendencies. – Rappler.com