Feb 23, 2019 8:52 PM PHT
Agence France-Presse
Facebook Twitter Copy URL
Copied
'God had promised us a caliphate and we went to it. I feel there will be no victory although they (jihadists) tell us victory is near,' says a Syrian woman who is a wife of a deceased ISIS fighter 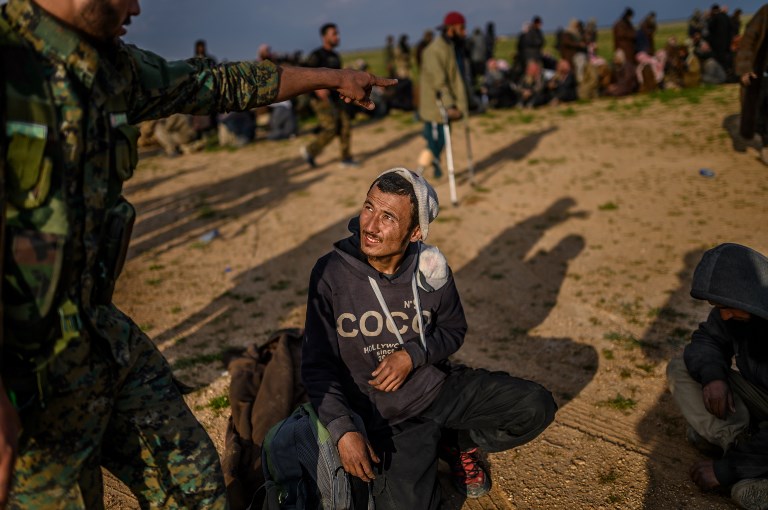 SYRIA – US-backed fighters said Saturday, February 23 they are keeping a corridor open to rescue remaining civilians from the Islamic State group’s last speck of territory in Syria, as the UN appealed for urgent assistance.

The Kurdish-led Syrian Democratic Forces have evacuated nearly 5,000 men, women and children from the jihadist holdout since Wednesday, February 20, bringing the SDF closer to retaking the less than half a square kilometer still under ISIS control.

“On our side, the corridor is open and we hope a larger number of civilians will arrive but that depends on ISIS fighters and whether they will give civilians a chance to exit,” SDF spokesman Adnan Afrin told Agence France-Presse at their Al-Omar base.

He said the SDF had evacuated “more than 2,000 people, including women, children and men” on Friday, February 22, mostly wives and children of ISIS fighters.

It warned of the “huge challenges” posed by the influx.

More than 4 years after ISIS overran large parts of Syria and neighboring Iraq and declared a “caliphate”, they have lost all but a tiny patch in the village of Baghouz near the Iraqi border.

Some 2,000 people are believed to remain inside Baghouz, according to the SDF.

The force says it is trying to evacuate remaining civilians through a corridor before pressing on with a battle to crush the jihadists unless holdout fighters surrender.

The SDF transferred the fresh batch of evacuees to a screening point outside Baghouz on Friday, to weed out potential jihadists.

An AFP correspondent saw hundreds of women and children spread out on the arid desert ground, surrounded by bags, begging for food and water.

A smaller group of men were separated from the women as SDF fighters searched the latest arrivals and checked their identification cards.

An Iraqi woman in her forties wearing a face veil held in her hand a medical report in English.

She said the report was written for her by a doctor inside the Baghouz pocket, explaining that she needed treatment for kidney problems.

“We were living in tents and eating bread made from bran. My 3 sisters and I didn’t have enough money to pay smugglers to get us out before, and our husbands had died in battle,” the woman from Aleppo’s countryside in northern Syria told AFP.

She was disappointed at the collapse of the ISIS proto-state.

“God had promised us a caliphate and we went to it,” she said. “I feel there will be no victory although they (jihadists) tell us victory is near.”

Around 44,000 people – mostly civilians – have streamed out of ISIS’s shrinking territory since early December, according to the Britain-based Syrian Observatory for Human Rights.

While civilians are trucked north to Kurdish-run camps for the displaced, mainly to Al-Hol, six hours drive from Baghouz, suspected jihadists are sent to SDF-controlled detention centers.

OCHA said 18 of the 2,500 latest arrivals in Al-Hol, mostly women and children, were in “critical condition”.

“Thousands more are expected in coming hours/days at Al-Hol camp, putting a further strain on basic services,” it tweeted.

The International Rescue Committee on Friday said 69 people, mostly children, had died on the way to Al-Hol, now home to more than 40,000 of the displaced, or shortly after arriving in past weeks.

“Two thirds of the deaths are of babies under one year old,” the relief group said.

The SDF says it has limited resources to administer camps and has called for support from the international community. – Rappler.com