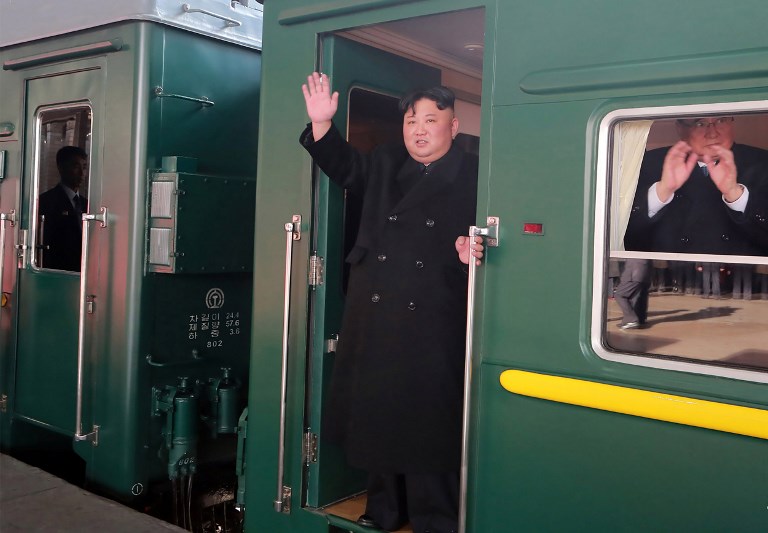 Emulating his late father and grandfather, who took epic train trips when they were leaders, Kim set off on the long journey from Pyongyang railway station on Saturday, February 23, with a military honor guard seeing him off.

His departure was confirmed by the North’s official KCNA news agency, with images showing citizens cheering him as he waved from the train before what could be a 60-hour journey to Vietnam.

The train crossed the border city of Dandong later that day, according to South Korea’s Yonhap news agency and the specialist outlet NK News, but its route remained a tightly-held secret.

The train’s crossing into China follows days of speculation over Kim’s travel plans, as his team gathered in Hanoi ahead of the talks expected next Wednesday and Thursday, February 27 and 28.

Ahead of his own departure for Hanoi, Trump said Sunday North Korea could become one of the world’s “great economic powers” if it relinquished its nuclear arsenal.

“Chairman Kim realizes, perhaps better than anyone else, that without nuclear weapons, his country could fast become one of the great economic powers anywhere in the world,” he wrote on Twitter.

Security was tight before Kim’s train arrived in Dandong, with police cordoning off the border bridge with tape and metal barriers, and leading an Agence France-Presse journalist out of the area.

A hotel facing the bridge was closed for impromptu renovations on Saturday.

“The train is long and crossed the bridge slower than the tourist train, but it’s definitely him, there’s a lot of police presence,” an unidentified source told NK News.

Windows on the train were blacked out, the source said, with only headlights turned on as it crossed.

The train usually takes 13 hours to reach Beijing, but there were no signs of heightened security around the railway station on Sunday, indicating the train likely bypassed the Chinese capital on the nearly 4,000-kilometer (2,500-mile) journey to Vietnam.

Kim has met Chinese President Xi Jinping 4 times in the past year, briefing his country’s sole major ally before and after his historic summits with Trump and South Korean President Moon Jae-in.

Kim, who last met Xi in January, could be saving their next meeting for his return trip to debrief the Chinese leader.

Trump and Kim met in June in Singapore, producing a vaguely worded agreement on denuclearization, but progress has since stalled, with the two sides disagreeing over what the agreement meant.

Observers say tangible progress is needed in Hanoi to avoid the talks being dismissed as a publicity stunt.

Several sources said Kim was expected to arrive in Vietnam by train, stopping at the Dong Dang station near the China border, then driving to Hanoi.

Soldiers were deployed to Dong Dang station and along the road to the capital, according to Agence France-Presse reporters at the scene.

Vietnam previously announced the unprecedented move of closing that 170-kilometer stretch of road on Tuesday, February 26, between 6 am and 2 pm – suggesting Kim could travel along it between those hours.

An Agence France-Presse reporter on Sunday saw Vietnamese military personnel sweeping for mines along the road.

“Vietnam wants to contribute its part to world peace…at this upcoming summit. Vietnam will ensure maximum security and safety to all the distinguished guests to Vietnam,” Vietnamese Prime Minister Xuan Phuc told reporters on Sunday.

As Kim traveled, delegations prepared for the summit, with Pyongyang’s special representative for the US, Kim Hyok Chol, appearing at a Hanoi hotel on Sunday afternoon for talks with his US counterpart Stephen Biegun, Yonhap reported.

Rail travel is a family tradition that was started by Kim’s grandfather, the North’s founder Kim Il Sung, who traveled to Eastern Europe for his longest train ride in 1984.

His late father, Kim Jong Il, traveled all the way to Moscow by train in 2001.

“It sends a strong message to North Koreans that Kim Jong-un has inherited his grandfather’s good qualities, and the Kim Dynasty is stronger than ever,” said Koh Yu-hwan, professor at Seoul’s Dongguk University.

Jeong Young-tae of the Institute of North Korean Studies in Seoul said the safest way to travel would be to take a plane provided by Beijing, as Kim did for the Singapore summit.

“But by choosing to travel by their own special train over a Chinese aircraft, Pyongyang may be signaling its willingness to be independent,” Jeong said.

Justin Hastings, associate professor in international relations at the University of Sydney, said that would be “a pretty major operation.”

But China may view the hassle as a necessary cost to get Kim to the summit.

“China wants North Korea to make some steps to denuclearize as much as anyone else,” Hastings said. – Rappler.com