Feb 25, 2019 12:35 AM PHT
Agence France-Presse
Facebook Twitter Copy URL
Copied
On a visit to Morocco, the Duke and Duchess of Sussex are promoting girls' education, women's empowerment, and the inclusion of people with disabilities 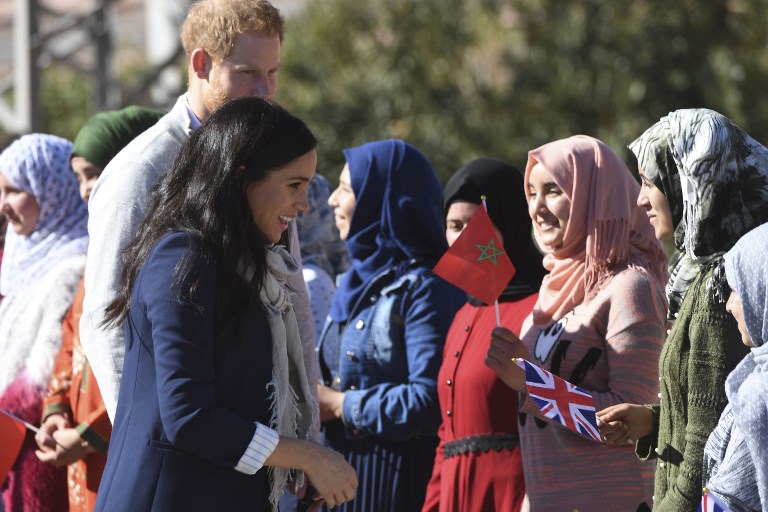 ASNI, Morocco – Britain’s Prince Harry and his wife Meghan on Sunday, February 24, met with Moroccan schoolgirls at the foothills of the High Atlas mountains, during their last official foreign tour before becoming parents.

Clutching British and Moroccan flags, the teenagers lined up to meet the royal couple during their visit to the town of Asni south of the tourist hub Marrakesh.

The British royals’ tour was set to focus on initiatives promoting girls’ education, women’s empowerment, and the inclusion of people with disabilities.

A heavily pregnant Meghan, with henna on one hand, accepted flowers from one of the girls in Asni while she and Harry chatted outside to a group from the program Education For All Morocco.

The organization runs free boarding houses to give girls aged 12 to 18 from the High Atlas region access to education, working with 185 teenagers in 2017.

“Wow, that’s impressive!” Meghan told a girl who has ambitions to study astronomy, an exchange filmed in a dorm room and posted on Twitter by Kensington Palace.

The couple also visited a classroom where pupils were practicing their English, according to the royals’ social media account.

A quarter of Moroccans aged 15 to 24 are out of work and not in training or education, according to official data for 2016, a figure which rises to 44% for girls and young women.

Asni is close to the mountainous area where two Scandinavian women were murdered in December and some British media have raised fears over safety during the royal tour.

But local diplomatic sources have dismissed concerns about security in Morocco, where on Thursday, February 21, police dispersed protesting teachers with water cannon in the capital Rabat.

“Medical provisions” have been made for Meghan, who is due to give birth in the spring, according to official sources.

The royal visit was described by Britain’s ambassador to Rabat, Thomas Reilly, as an “important opportunity to promote the strong relationship between the British and Moroccan people.”

London is aiming to replicate Rabat’s trade deal with the European Union once Britain leaves the bloc, the diplomat added.

Bilateral trade is valued at £1.8 billion (2.1 billion euros) by the British government, although the economic partnership falls far short of that which Morocco has with Spain, Germany, or France.

Reilly, who posted a photograph online of the royal couple with a youth football team in Asni, was due to host a reception with the couple at his Rabat residence later on Sunday.

On Monday, February 25, the Duke and Duchess of Sussex, as they are formally known, will attend a horse riding program for young people with disabilities in Rabat.

Harry and Meghan, who are being hosted by the Moroccan royal family, will also see a cooking demonstration and meet young entrepreneurs. – Rappler.com