Feb 25, 2019 7:50 AM PHT
Agence France-Presse
Facebook Twitter Copy URL
Copied
(UPDATED) Results of the vote, which the government turned into a plebiscite on the 'irrevocable' role of socialism in the island nation, are expected late Monday 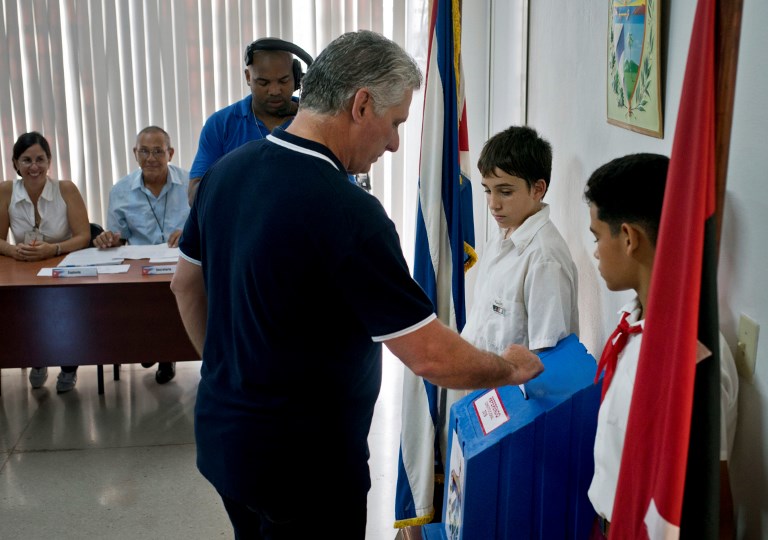 HAVANA, Cuba (UPDATED) – Cubans voted in a referendum on a new constitution on Sunday, February 24, with the backdrop of mounting pressure from the United States and continued support for Venezuela’s socialist regime.

Results of the vote, which the government turned into a plebiscite on the “irrevocable” role of socialism in the island nation, are expected late Monday.

“We Cubans are voting for our new constitution, we’re voting for Latin America and the Caribbean,” President Miguel Diaz-Canel said when casting his vote.

“We’re also voting for Venezuela, we’re defending Venezuela because in Venezuela the continent’s dignity is in play.”

Diaz-Canel hit out at the presidents of Chile, Colombia and Paraguay for joining Venezuelan opposition leader Juan Guaido on Saturday in his attempt to force humanitarian aid across the Colombian border into Venezuela.

“A group of presidents on the Colombian border, they look like clowns,” said Diaz-Canel.

Diaz-Canel later tweeted: “The hawks of the empire and their lackeys failed, but the empire is not dropping its plans. Let’s continue the struggle.”

Cuba has been trying to galvanize international support for its ally and against US “military aggression.”

Venezuelan President Nicolas Maduro claims the humanitarian aid, mostly supplied by Washington, is a smokescreen for a US invasion.

Former president Raul Castro, 87, who retains the powerful position of first secretary of the ruling Communist Party, cast his ballot in the morning without making a statement, local media reported.

The vote in Cuba comes after the latest attack on socialism by US President Donald Trump, who last week said the leftist ideology is “dying.”

But Trump’s words served only to boost those voting in favor of the new constitution, which reiterates the central role of socialism and communism in Cuba, analyst Carlos Alzugaray told AFP.

“Many people, seeing his quotes, will vote yes because they want to defend their independence against the US threat,” said Alzugaray.

US Senator Marco Rubio, whose parents are Cuban, hit out at the Havana regime on Twitter.

“The so-called ‘referendum’ in #Cuba is another maneuver by the Cuban dictatorship to hold its grip on power,” he wrote.

“Today’s plebiscite is nothing more than a farce and a fraud of the communist party. #IllegalConstitution.”

The new constitution, replacing the 1976 version, recognizes a limited role for the free market and private investment, but only under the control of the Communist Party.

It enshrines socialism as the country’s only ideology, a move criticized by the Catholic Church.

Cuba’s banned opposition, which normally calls for abstention at elections or spoiling ballot sheets, has this time campaigned for a no vote.

“It is obvious that this goes beyond a no to a constitution, it’s a no to a regime that aims to perpetuate itself in power,” dissident Jose Daniel Ferrer told AFP.

The referendum contains only two options: yes or no to the new constitution.

“Two options, one that favors the regime and the other that represents the only opportunity the people have had in years to say no,” added Ferrer. – Rappler.com