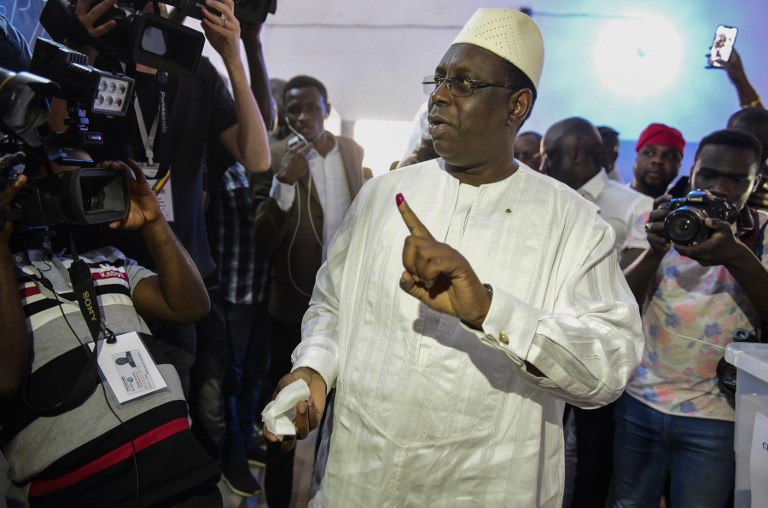 DAKAR, Senegal – Senegal’s President Macky Sall won in the first round of the election Sunday, February 24, his prime minister said, although his two main challengers look set to contest the outcome.

“The results allow us to say that we should congratulate President Macky Sall on his re-election,” Prime Minister Mahammed Boun Abdallah Dionne said at midnight, predicting the incumbent would receive “at least 57 percent” of the vote.

His announcement hours after polls closed was greeted with cheers from supporters gathered at the headquarters of the presidential coalition in Dakar. Sall, who was seen there earlier in the evening, did not speak.

Official results from each region are not expected until Tuesday, February 26, with a nationwide announcement by Friday midnight, March 1, at the latest. If no one wins more than 50 percent a second-round runoff will be held on March 24.

“At this stage, a second round is announced and the results that are already compiled allow us to say so,” said former prime minister Idrissa Seck, who was making his third run for president.

“At the current state of the vote count, no candidate, I say no candidate, including myself, can claim to have won the presidential election,” taxman-turned MP Ousmane Sonko, who was also in the race, added at their joint press conference.

Seck and Sonko are the only two candidates seen as having a chance of making it to a second round, with incumbent Sall, 56, in the lead in many polling stations, according to preliminary results reported in the evening by local media.

The other challengers, former foreign minister Madicke Niang and Issa Sall of the Unity and Assembly Party (PUR), were trailing far behind, according to the results.

Macky Sall had looked set to cruise to victory in the first round after his two key rivals, popular former Dakar mayor Khalifa Sall and Karim Wade, son of the previous president, were banned from running over graft convictions and he only faced four lesser-known candidates.

“At the end of this day, the Senegalese people alone will be the winner. And the president chosen will equally have to be president of all Senegalese,” Sall said after voting Sunday.

A geologist by training, Sall took over as president in 2012 after beating his former mentor Abdoulaye Wade, and this time, he has campaigned for a second term championing his “Emerging Senegal” infrastructure project to boost economic growth.

“Victory in the first round is indisputable,” Sall told a recent Dakar campaign rally.

The EU observation mission said its overall assessment was “quite positive” among the polling stations it observed.

“There has been very little violence, very isolated incidents, which is very good news,” said Elena Valenciano, head of the mission.

Often held up as a model of stability in Africa, Senegal has enjoyed strong growth. The Muslim-majority country has largely escaped the jihadist attacks that destabilized neighbors such as Mali.

The other 4 candidates have campaigned hard against his plans for a second phase of his project, which critics see as a potential debt burden.

The five-horse race leaves voters with a limited choice compared to 2012 when 14 candidates vied for the top post.

A new system approved by parliament last year requires candidates demonstrate support from a minimum number of citizens and regions.

Once the regulations went into force, only 7 candidates made the cut, but two of them – Khalifa Sall and Karim Wade – were then disqualified.

Both men were barred over their convictions for misuse of public funds, which they say were engineered to bar them from the race.

Their supporters staged a number of protests and last year, Amnesty International issued a report highlighting the “unfair trials” of senior opposition figures, flagging a “lack of (judicial) independence” in the case against Khalifa Sall.

Senegal has a population of 16 million but only 6.7 million were registered to vote in the West African nation which gained independence from France in 1960.

Senegal has known two peaceful power transfers in 2000 and 2012 and has never experienced any coups. But election campaigns are often marred by charges of corruption, disinformation and sometimes violence.

For polling day, some 8,000 police were deployed throughout urban areas alongside an unspecified number of civilian security staff, officials said.

And around 5,000 observers – including some from the European Union – were monitoring proceedings, the interior ministry said. – Rappler.com