Feb 25, 2019 2:55 PM PHT
Agence France-Presse
Facebook Twitter Copy URL
Copied
The best-case scenario, according to one analyst, would be if Trump and Kim can agree to a roadmap for the denuclearization process 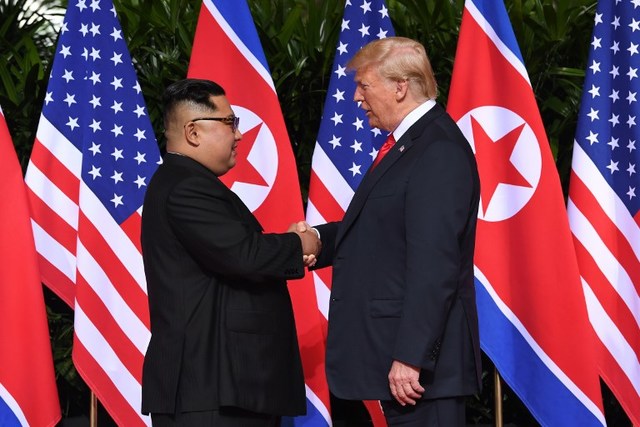 HANOI, Vietnam – US President Donald Trump and North Korean leader Kim Jong Un meet in Hanoi this week, faced with putting meat on the bones of the vaguely worded declaration that emerged from their historic first summit in Singapore.

That encounter – the first-ever between the leaders of the US and North Korea – left many ambiguities on the key question of denuclearization and analysts say clearer answers need to emerge in the Vietnamese capital.

At the June meeting, Kim pledged to “work towards complete denuclearization of the Korean peninsula” but the lack of progress since then has drawn criticism that the leaders were only after headlines and short-term gains.

Stephen Biegun, the US Special Representative for North Korea, acknowledged last month that Pyongyang and Washington did not have a “shared agreement of what denuclearisation entails”.

Pyongyang sees denuclearization more broadly, seeking an end to sanctions and what it sees as US threats – usually including the American military presence in the South, and sometimes in the wider region.

“The ambiguity and obscurity of the term denuclearisation only exacerbates the scepticism about both the US and North Korean commitments to denuclearisation,” wrote Shin Gi-wook, director of the Korea Program at Stanford University. (READ: Trump-Kim II: The summit, the script, and the sequel)

Trump has employed both carrots and sticks to pursue North Korea’s denuclearisation, praising the regime’s potential as a “great economic powerhouse” but saying tough sanctions will remain until it takes a “meaningful” step.

At a White House event on Sunday, February 24, he said the sanctions – imposed over Pyongyang’s missile and nuclear tests – would remain, and appeared to temper any expectations of a major breakthrough in Hanoi.

“The sanctions are on. Everything is on. But we have a special feeling and I think it will lead to something very good. Maybe not,” Trump said.

“I don’t want to rush anybody. I just don’t want testing. As long as there’s no testing, we’re happy.”

Pyongyang insists it has already taken such steps, by not testing ballistic missiles or nuclear weapons for more than a year, and blowing up the entrances to its atomic test site.

But at the same time, North Korea says it has completed the development of its arsenal and the facilities are no longer needed.

Diplomats in Pyongyang say authorities have emphasized Kim’s demand in his New Year speech that the US must respond with “trustworthy measures and corresponding practical actions”.

The two need to take “at least one step forward on denuclearization” in Hanoi, said Harry Kazianis of the Center for the National Interest, adding: “Nothing would be worse than for either side to come out of the meeting as if it was a waste of time.”

Officials are scrambling to prepare for the summit, with Biegun and his North Korean counterpart Kim Hyok Chol expected to wrangle over the text of the joint statement until early morning on Wednesday.

Some of Washington’s recent rhetoric has stressed the safety of US citizens rather than the North abandoning its arsenal.

That has raised questions whether Trump might be willing to accept a nuclear-armed North if it gives up the intercontinental ballistic missiles with which it can target the US.

That would leave US allies South Korea and Japan both within range of the North’s arsenal, and was described as “the worst scenario” in an editorial by the Korea Herald.

The US president proclaimed that the North Korean nuclear threat was over after the Singapore summit, and Scott Seaman of the Eurasia Group said he had one eye on a Nobel Prize.

“Trump will likely focus more on reinforcing a narrative that he has secured peace than on pushing Kim to denuclearise,” he wrote.

The best-case scenario, said Kim Yong-hyun of Dongguk University, would be if Trump and Kim can agree to a roadmap for the denuclearization process.

North Korea could agree to “visible, symbolic measures” such as the shuttering of the Yongbyon nuclear complex or dismantling ICBMs.

Washington could promise security guarantees in the form of a declaration of an end to the 1950-53 Korean War – which ended with an armistice instead of a full peace treaty – or opening liaison offices.

That would signal the first stage of normalizing US-North Korean relations, said Go Myong-hyun of the Asan Institute of Policy Studies, and would be an ideal “politically symbolic step” rather than prematurely agreeing to sanctions relief.

“The previous expectation that this is going to be a milestone… is probably misplaced,” he told AFP.

But Trump is unpredictable, and could look to deflect attention from his domestic woes.

His former lawyer Michael Cohen is due to testify to Congress on February 28, and former CIA analyst Soo Kim told AFP: “Trump could impulsively agree to give away significant concessions to Kim in Vietnam expressly for his own interests. – Rappler.com