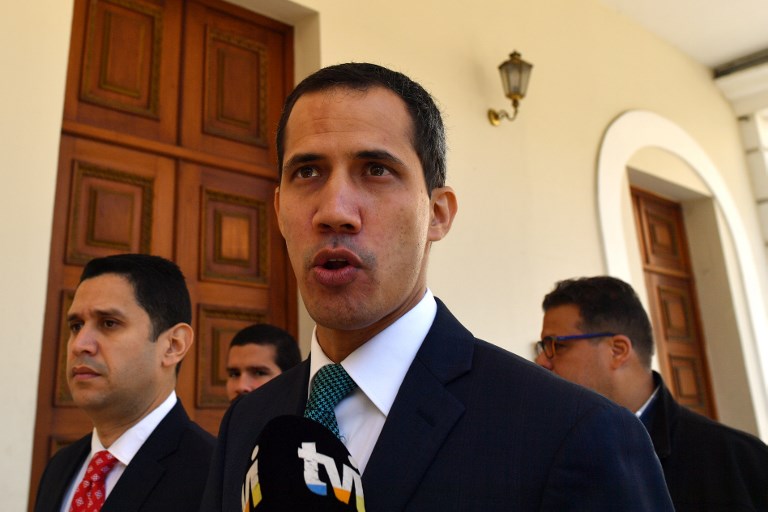 The trip comes after two people were killed and hundreds wounded as Guaido supporters clashed with Venezuelan security forces in a failed attempt to cross in truckloads of humanitarian aid  from Colombia and Brazil.

The European Union condemned Venezuela’s use of violence and armed civilians to block the aid entry, while United Nations Secretary-General Antonio Guterres said he was “shocked and saddened” by the civilian deaths.

Guaido, the 35-year-old leader of Venezuela’s National Assembly, declared himself acting president in January after the opposition controlled legislature concluded that Maduro was fraudulently re-elected.

Some 50 countries recognize him as Venezuela’s legitimate president.

Guaido flew to the Colombian capital Sunday, February 24, for the meeting with members of the Lima Group – 13 Latin American countries plus Canada that are seeking to resolve Venezuela’s political impasse.

Vice President Mike Pence, who represented Washington at the event, passed on a message from US President Donald Trump to Guaido, telling him “we are with you 100%.”

“We have reaffirmed again and again our commitment to a democratic transition (of government) and the restoration of constitutional order in Venezuela,” added Colombia’s Foreign Minister Carlos Holmes Trujillo.

Holmes Trujillo added that the group of 15 nations, which officially added Guaido as Venezuela’s representative, was “trying hard to facilitate the opening of a humanitarian corridor to provide international assistance to alleviate, even if only partially, the serious humanitarian situation affecting so many Venezuelans.”

Venezuela is wracked by a humanitarian crisis following years of recession and hyperinflation that have left shortages of basic necessities such as food and medicine.

Guaido says 300,000 people face death if those supplies aren’t brought in urgently but Venezuela President Nicolas Maduro refuses to let it enter, claiming it would be a smokescreen to a US invasion.

De Zela criticized Maduro’s government for “the use of force and massive human rights violations” against those trying to bring in aid at the weekend.

He described the use of force as “unacceptable. It’s not the solution to what’s happening in Venezuela.”

Four members of the Lima Group skipped the meeting, Holmes Trujillo said.  Mexico, Costa Rica, Guyana and Saint Lucia were not present and have previously abstained from several of the group’s tougher positions towards Maduro’s regime.

“The moment has arrived to adopt further measures to isolate the regime,” added De Zela.

Upon landing in Bogota, Guaido called on the international community to consider “all measures to free” Venezuela.  (READ: Who backs whom in Venezuela crisis)

This is the first time that the Lima Group, which first met in the Peruvian capital in 2017, spoke directly to Guaido.

Venezuela is in the midst of a humanitarian crisis that has seen poverty soar during a prolonged recession and hyperinflation.

Humanitarian aid, much of it from the United States, has been at the center of the standoff between Maduro and Guaido.

Maduro claims the aid is a smokescreen for a US invasion, and has ordered several crossings on Venezuela’s borders with Colombia and Brazil closed.

The EU on Monday urged countries to avoid any military intervention in Venezuela.

“What is explicitly quite clear, from our point of view, is that we need a peaceful political and democratic and Venezuelan-owned resolution of this crisis,” she added.

“This obviously excludes the use of force.”

The EU reached its position at a meeting of foreign ministers in Brussels last Monday.

On Sunday, Spanish Foreign Minister Josep Borell told the Efe news agency, “We have warned quite clearly that we wil not support and we will firmly condemn any foreign military intervention.”

President Donald Trump had earlier said the United States is not ruling out armed action.

“Not a single one of those trucks with aid got through,” Cabello said.

Maduro seems to have won this round in the power struggle, even though 156 members of Venezuela’s security forces deserted to Colombia or Brazil.

After Saturday’s events it is “not very clear” that Guaido has “massive” support in Venezuela, analyst Rafael Pineros told Agence France-Presse (AFP).

However the events, which also led to increased repression by the Maduro regime, may instead result in a forceful foreign intervention in Venezuela, according to political scientist Laura Gil.

“In the Lima Group the consensus is that Maduro must be removed, but there is no consensus on how to do that,” Gil told AFP.

Another winner is Washington, because the only way to justify a use of force, if they are willing to actually do that, “is by invitation,” she said.

‘No food’ in the barracks

Colombian President Ivan Duque visited the two border crossing points where most of the violence took place on Saturday.

A 14-year-old boy was among those killed Saturday near the Brazilian border in clashes with Venezuelan security forces. More than 300 people were injured in a day of disturbances at crossings on the Colombian and Brazilian borders.

Sporadic clashes between hooded protesters and police, supported by terror-spreading armed civilian “colectivos,” continued Sunday on the Venezuelan side of the border, but were not as intense as the day before.

Scores of Venezuelans who managed to slip across the border to get aid were trapped there as Venezuelan authorities had closed the border.

Nicolasa Gil, a frail 71 year-old who spent the night in Cucuta near one of the crossing points, said she was “scared to cross into my country.

“Here we’re safer than over there,” she told AFP.

The attempt to cross aid stockpiled in Colombia led Maduro to sever ties with Bogota – and on Sunday, a group of Colombian diplomats trickled across one of the border bridges on foot, luggage in tow.

In the barracks “there is no food,” said one of the defectors, identified as Carlos Eduardo Zapata.

“They don’t even have mattresses. Us National Guard sergeants are sleeping on the ground.” – Rappler.com