Feb 25, 2019 10:42 PM PHT
Agence France-Presse
Facebook Twitter Copy URL
Copied
(UPDATED) 'We simply cannot afford to return to the unrestrained nuclear competition of the darkest days of the Cold War,' says UN Secretary General Antonio Guterres, as he asks the US and Russia to preserve a crucial nuclear treaty 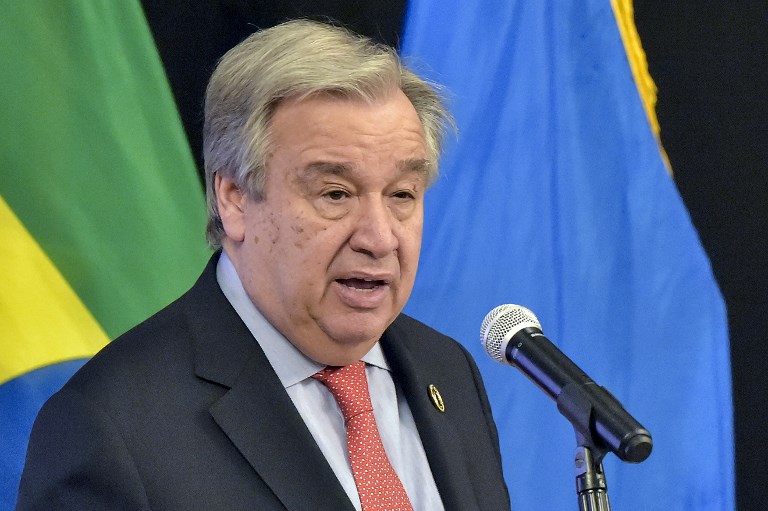 GENEVA, Switzerland (UPDATED) – The international arms control system is facing collapse, the United Nations chief said Monday, February 25, as he urged Russia and the US to stop the imminent demise of a crucial nuclear treaty.

Secretary General Antonio Guterres used an address to the UN’s Conference on Disarmament to warn that one of the cornerstones of diplomatic achievement over the last half century – arms control – was in “grave danger.”

“I will be blunt. Key components of the international arms control architecture are collapsing,” Guterres said.

The United States has already begun the process of withdrawing from the Intermediate-Range Nuclear Forces (INF) treaty, in response to Moscow’s deployment of the 9M729 missile, prompting Russia to announce its own withdrawal.

“We simply cannot afford to return to the unrestrained nuclear competition of the darkest days of the Cold War,” Guterres said.

“I call on the parties to the INF Treaty to use the time remaining to engage in sincere dialogue on the various issues that have been raised,” he added. “It is very important that this treaty be preserved.”

The collapse of the 1987 treaty, which banned ground-launched missiles with a range of 500 to 5,500 kilometers, has sparked fears of a new arms race in Europe.

The US withdrawal is not set to take effect until August, giving a 6-month window to save the treaty, but few expect this to happen and NATO has warned the world should ready itself for the pact’s scrapping. (READ: Germany says missile treaty dead as Europe frets about arms race)

Guterres recalled that despite a mutual lack of trust, the US, the former Soviet Union and later Russia agreed to a series of arms control agreements through a commitment to strict verification, which became “one of the hallmarks of international security.”

He voiced hope that nations would recommit to the principles of verification and compliance to forge urgently needed deals covering nuclear weapons and new technologies like “hypersonic weapons that could be used to launch attacks at unprecedented speed.”

UN-backed negotiations are under way to govern the use of so-called killer robots, or weapons that can deploy lethal force without a human making the final decision to launch a strike.

But those talks have moved at a glacial pace, with activists accusing major powers of dragging their feet.

Guterres warned that new technologies are changing the arms control landscape “in ways we do not yet understand and cannot even imagine.”

“We need a new vision for arms control in the complex international security environment of today,” he added. – Rappler.com